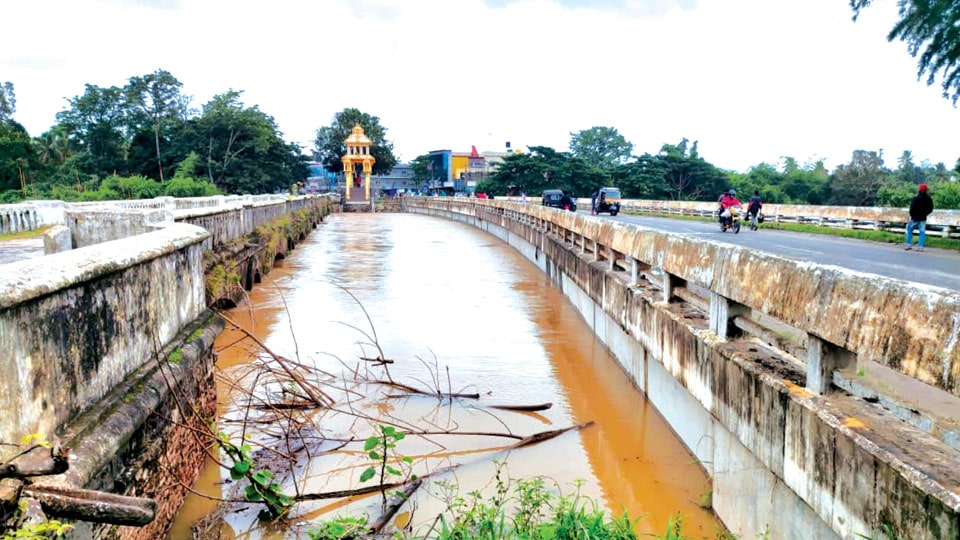 Madikeri: The flood situation in Kodagu District continues to be grim with the water level showing no signs of abating. Though heavy rains have given a break, water level has not receded and in the district, 54 villages and towns are flooded, said the District Administration.

The National Disaster Response Force (NDRF) team stationed at Talacauvery is waiting for the weather to improve to carry out relief and rescue operations in Talacauvery. The operations have been put on hold as of now due to inclement weather.

According to reports, Kodagu received 235 mm, the highest rainfall in India on a single day on Aug. 7 (Friday). According to India Meteorological Department (IMD), the district received 235 mm along with Mahabaleshwar and Matheran in Maharashtra. The IMD has forecast that rains will give a break on Aug. 8 and 9 but will again pick up vigour from Aug. 10 and will continue to lash the district till Aug. 12.

Bhagamandala in Kodagu has received rainfall of 486 mm in the period between Wednesday and Friday, according to IMD data. It has surpassed the previous daily record of rainfall in the district at 300.2 mm rainfall at Madikeri on Aug. 17, 2018.

The Central Water Commission said River Cauvery was at its highest flood level in Napoklu.

Kodagu District Minister V. Somanna, who reached Talacauvery via boat from Bhagamandala along with rescue team to assess the situation, said, “Since the Triveni Sangama (the confluence of Cauvery, Kannika and Sujyothi) has flooded, it has hampered connectivity between Bhagamandala and Talacauvery. So the NDRF teams have not been able to carry machines to carry out operations to trace five people who have gone missing. If the rains subside, NDRF team will take up operations to trace those people missing,” he said.

This morning, Somanna, Pratap Simha and Madikeri MLA Appachu Ranjan visited flooded areas in Kushalnagar and inspected the areas including Sai Layout and Kuvempu Layout. Residents demanded the Minister to conduct a survey of flood-prone areas and take up preventive measures as the town has faced flash floods since the last three years. In Kushalnagar, over 250 houses are fully marooned and 500 houses are partially flooded. Residents have been moved to safer places.