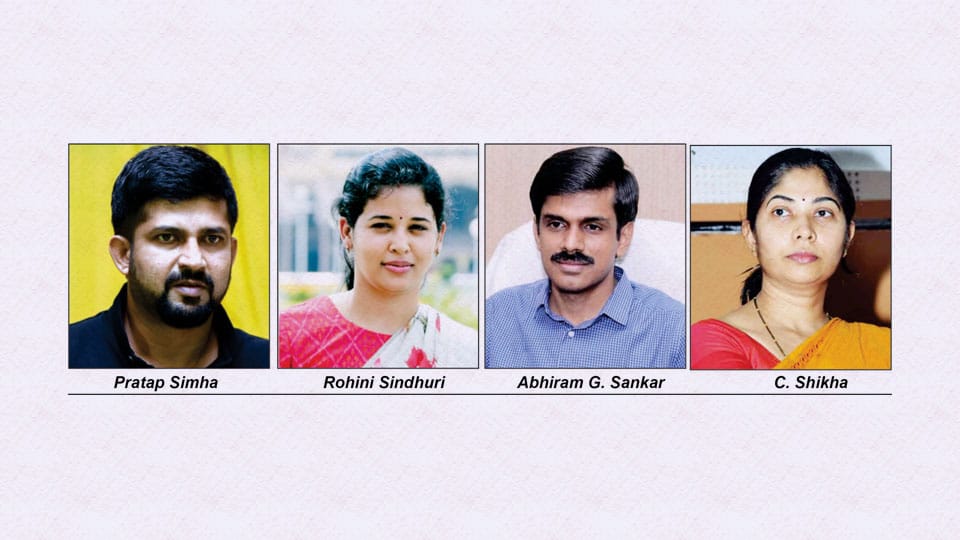 Mysore/Mysuru: With COVID case-load in the district increasing by the day, MP Pratap Simha has suggested the current Deputy Commissioner (DC) Rohini Sindhuri to emulate her predecessors like Abhiram G. Sankar and C. Shikha for effectively tackling the COVID crisis.

Speaking to Star of Mysore after visiting medical equipment manufacturer Skanray Technologies in Hebbal Industrial Area on Sunday, along with senior officials for ventilator supplies in the wake of probable third wave of attack of the deadly Coronavirus, Simha revealed his mind on various issues concerning COVID control and non-inclusion of DC Rohini Sindhuri in the District-level COVID Task Force headed by him.

Contending that the failure to take effective measures for prevention and treatment of COVID-infected and also those in home isolation had led to escalation of case-load both in the city and district, Simha expressed concern over rising fatalities in rural areas.

Noting that as people from rural parts are undergoing treatment in city hospitals, a clear picture of the rural scenario has not emerged, Simha accused Sindhuri of misleading people by only giving figures about high COVID fatalities in Mysuru, while not bothering to visit rural parts of the district.

Pointing out that the DC must visit rural parts and ensure that door to door survey is carried out in villages for early detection of the contagion, he said that the DC must also see to it that all primary contacts are admitted at isolation centres and those who remain in home isolation get proper medical treatment. Maintaining that all these advice was made in a meeting chaired by the District Minister, Simha charged the DC of only holding meetings from morning till evening at Mysuru, while ignoring the advice and suggestions made by the District Minister and other people representatives.

READ ALSO  Help pours in for the needy

Questioning the DC over holding prolonged meetings with officials instead of asking them to go on field work, the MP took exception to the DC’s attitude of holding only virtual meetings, instead of practical work for checking the spread of the virus in rural parts.

Continuing, Simha claimed that there were lapses on the part of the District Administration on issues concerning Remdesivir injections, Oxygen supplies and ventilator facilities in hospitals and also that there was delay in taking urgent measures even after 5 out of 123 children reportedly  died  of infection at Cheluvamba Hospital.

Citing an example where the efforts of a Gram Panchayat PDO had resulted in two villages of Nanjangud taluk recording not even a single COVID positive case thus far since the pandemic outbreak last year, the MP wondered why the DC, could not emulate the same in other rural parts of the district.

Recalling services of Abhiram Sankar as Mysuru DC, he said that Abhiram took all his sub-ordinates and people representatives into confidence before setting out for action on COVID control measures, which had worked to a large extent last year.  Asserting that his sole intention is that the current DC should also function in a similar manner, Simha argued that he has no other political intentions while saying so. He wanted Rohini Sindhuri to work in a manner similar to that of her predecessors Abhiram Sankar and Shikha for effectively checking the spread of the virus in the district.

Defending his defence of Mysuru DC Rohini Sindhuri in the Chamarajanagar tragedy where 24 COVID patients reportedly died for want of Oxygen on the intervening night of May 2-3 at Chamarajanagar District Hospital, for which Mysuru District Administration was falsely blamed and also supporting her when some Opposition party politicians recently charged her of constructing a swimming pool in the premises of her official residence by spending a big sum in violation of heritage norms, Simha said that the intention of everyone is that the DC should be more active and work effectively for tackling the deadly COVID contagion, which is spreading fast even in rural and interior parts of the district.

Commenting on his appreciation for MCC Commissioner Shilpa Nag, who also like Rohini Sindhuri is an IAS Officer, Simha said that setting up of COVID Mitras and Helplines is Shilpa Nag’s sole idea.

Arguing that COVID Mitra centres had largely helped in addressing issues concerning COVID hospitalisation and treatment, he said that, this apart, the MCC Commissioner has launched a door-to-door survey for early detection of COVID cases, which also is her innovative idea.