Home » News » DC’s order to close COVID Care Centres is the reason why MP is now attacking her: Congress 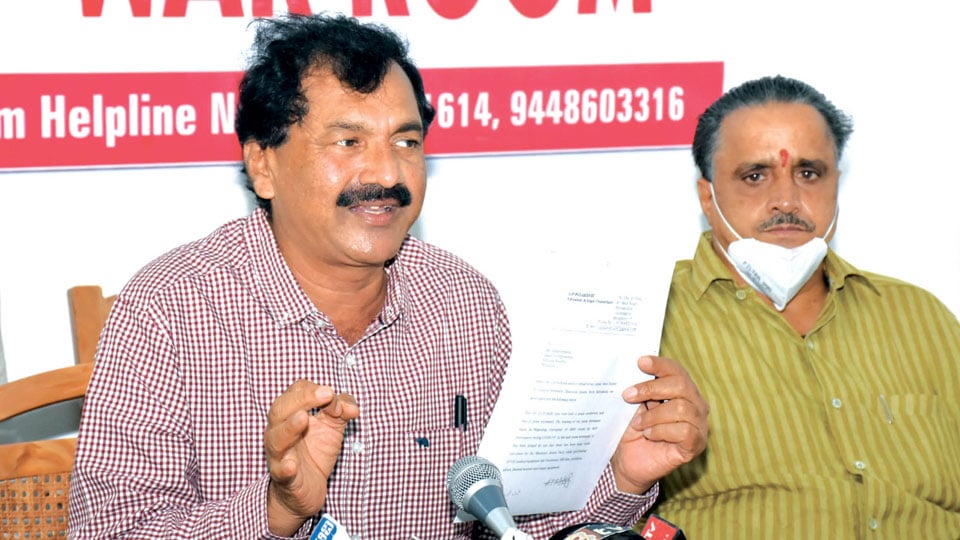 DC’s order to close COVID Care Centres is the reason why MP is now attacking her: Congress

Mysore/Mysuru: The written order issued by the District Health Officer(DHO)  Dr. T. Amarnath to close down 16 COVID Care Centres set up in all the three Assembly Constituencies based on a verbal order issued by Deputy Commissioner Rohini Sindhuri has snowballed into a major controversy.

The Congress party has latched on to the order and has claimed that the DC’s order had rattled Mysuru-Kodagu MP Pratap Simha who ‘with his influence and good offices’ had permitted many of these COVID Care Centres (CCCs) to function, violating the Government orders and was ‘taking percentage from CCCs.’

Addressing a press conference in city this noon, Congress Spokesperson M. Lakshmana alleged that the DC’s order to the DHO to close down 16 CCCs has caused a rift between the MP and the DC and now the MP is targeting the DC though she was doing good work.

After a meeting of City Advisory Task Force on May 19, the DHO issued orders to close these centres following complaints of CCCs not having infrastructure and also medical assistance. The DHO, in his report to the DC has stated that these COVID Care Centres were not following the protocols issued by the Government.

Also, many of them lacked facilities and some have converted the hotels into money-making business activity where one floor is allotted to one hospital and the other floor is allotted to another hospital. All Standard Operating Procedures (SOP) were violated. The guidelines do not allow this and it is a clear violation, the DHO had stated.

Mentioning particularly about the CCC set up at Gokulam Youth Hostel, a Government building taken free of cost, Lakshmana said, “The Government has permitted CCCs to charge patients Rs. 8,000 per bed (ordinary CCC), Rs. 10,000 (for three star CCC) and Rs. 12,000 per day for five star CCC. Here at the Youth Hostel, the patients are charged Rs. 15,000 to Rs. 30,000 per day.

Giving out details, the Congress Spokesperson said, “The Youth Hostel was handed over to a Private Hospital to manage and the authorisation was given by MP Pratap Simha in the capacity of the Chairman of the Task Force to ensure oxygen supplies and Remdesivir injections. Who authorised the MP to accord permission for  the Private Hospital to manage the Youth Hostel CCC? Not only this, almost all the CCCs have obtained permission from the MP to operate,” Lakshmana alleged.

None of the CCCs had proper facilities, their staffs were not qualified. “As per the Government order, qualified doctors, nurses and other para-medical staff must manage the CCCs. Here unqualified people have been appointed as nurses. There is no information passed on to the patient’s relatives and they are not informed about the extra charges during admission and there is no rate chart displayed at the CCCs,” he noted.

“Moreover, apart from the bed charges, the patients were being charged for medical care separately and this amounted to Rs. 3 lakh to Rs. 4 lakh for a 10-day stay. This is big loot and the DC has stopped this. Following the DC’s order, now the MP is targeting her and speaking against her in public,” Lakshmana alleged.

Many CCCs had tied up with insurance companies and the patients were assured that if they make full payment, either the insurance companies or the Government would refund the money. “Most of the CCCs are managed by BJP workers and office-bearers. Every CCC is offering percentage — 30 percent to 40 percent per patient — to the MP and now this percentage business has ended with the DC’s and DHO’s order,” Lakshmana alleged.

3 COMMENTS ON THIS POST To “DC’s order to close COVID Care Centres is the reason why MP is now attacking her: Congress”