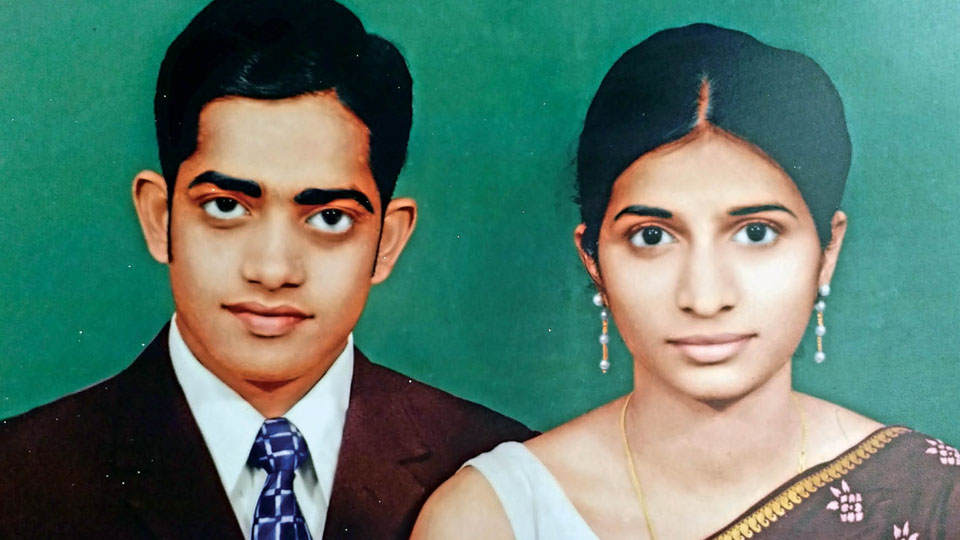 Taking up the string of my narration from where I left off last week, I would like to remind readers here that truth can often be stranger than fiction and this is what amazing and sometimes incredible real life stories are made of. This is one such story of how Rev. Fr. Mathias Fernandez, the third Catholic Bishop of Mysuru, went beyond the call of duty to help a young man and his lady love to get married against very steep odds. In the mid sixties, my very close friend, Prof. Jacob Chandy, a very well-known former Professor of Economics at St. Philomena’s College in our city, fondly known by all his friends and relatives as Jacky, was in love with his college-mate, Asha, a girl from a very well-known family in Coorg. Incidentally, she was an outstanding athlete too who then captained Mysore University in athletics.

Facing stiff opposition to this alliance from her family, the girl with the help of her fiancé, was forced to take refuge for some months in a convent at Kottayam in Kerala. Jacky could not think of marrying her immediately and supporting a family as he was jobless and had not even finished his education, with eight months still to go before appearing for his final MA examination. His father, Prof. Varghese Chandy, again a Professor of Botany at St. Philomena’s College, was already looking after the upkeep of a large family comprising his nine siblings and a few cousins too who were staying with them, insisted that the marriage could take place only after Jacky completed his education and landed a job, however ordinary.

So the family was forced to put off this marriage for some more time. This did not go down well with Jacky’s close friend, Ashok Lazar who felt that he was being very unfair to the girl by having drawn her away from her family and consigning her to a life of inconvenience amid sisters, in a far off convent where he could not visit her. So the friend dashed off a letter to Jacky’s father highlighting the plight of the girl and pleading with him to do something to mitigate the sad situation by agreeing to an immediate marriage. He also posted a copy of the letter to Jacky himself, perhaps for necessary supportive action!

Armed with this document, Jacky, now the chivalrous knight, went to the Bishop’s House one late night with the fond hope that if he could get the Bishop to speak to his father, the reluctant don would relent in his favour! Thankfully, Bishop Fernandez heard him patiently and after a long pause asked him to get into his car and they both headed to the Chandy home! The elderly Professor and his wife could only agree to what the head of their Church pleaded with them to do, having himself come all the way to their door. But they also explained to him the difficulties that they would face if they agreed to the marriage of their still jobless son.

The Bishop assured them that God, Almighty would find a way out and left the place. Understandably, the ride back to the Bishop’s House was perhaps the most ecstatic journey of Jacky’s life! Once there the Bishop rummaged through his wallets and handbags only to find to his dismay that there was not much ready cash on hand which he could give to help a desperate Jacky. Then he did something incredible that knocked the ground off from below the feet of the perplexed lad. The Bishop took off his ceremonial gold and silver Cross from his neck and offered it to him, asking him to sell it away and use the money to not only get married immediately but also to run his home till he could complete his education and find a job!

A stunned Jacky could only scream, “No my Lord, please do not do this. I cannot take your Cross and sell it away for my needs”. Saying this he ran to where he had left his bicycle even as the Bishop was running after him and pedalled away hard to reach his home in a daze, panting hard.

When he narrated to his parents how the Bishop had almost pleaded with him to accept the Cross and use it to get married, they were aghast. While his mother was happy that he had not touched it, his father felt that he should have gracefully accepted the Bishop’s offer of help instead of running away from him which was a very rude thing to do. However, they both advised him to go back to the Bishop’s House immediately and apologise to him for his thoughtless behaviour. So Jacky pedalled back once again to listen to what was perhaps his most wisening sermon from the Bishop at a most unearthly hour and received the best gift of his life; an angry and incensed Bishop’s blessings and the burden of reluctantly bearing his Cross!

He returned home and caught the very next bus to Cochin where his friend Ashok stayed. Once there he ran into an altogether unexpected problem. No one there was willing to believe that the Bishop had himself given away his Cross to him. They all suspected that he had stolen it in a desperate bid to mobilise some money to get married! He had a tough time convincing them that he had done no such thing. That was when Ashok’s mother, Mrs. Lazar, intervened and said that there was no need to sell an object as hallowed as a Bishop’s Cross to finance a wedding that would hardly have about twenty guests! So she offered to keep the Cross safely with her and gave whatever money she had with her to enable the wedding to take place!

And, the wedding did take place on 19th, June, 1967 in the Wellington Island Church and the Bishop’s Cross soon returned safely to Mysuru once again, without having to bear the indignity of being sold or pawned and was respectfully handed back by a grateful Chandy family to Bishop Mathias Fernandez who wore it around his neck safely for the next eighteen years till he handed it over to me for its final safe-keeping!

5 COMMENTS ON THIS POST To “Helpless Cupid & the Helpful Cross!”