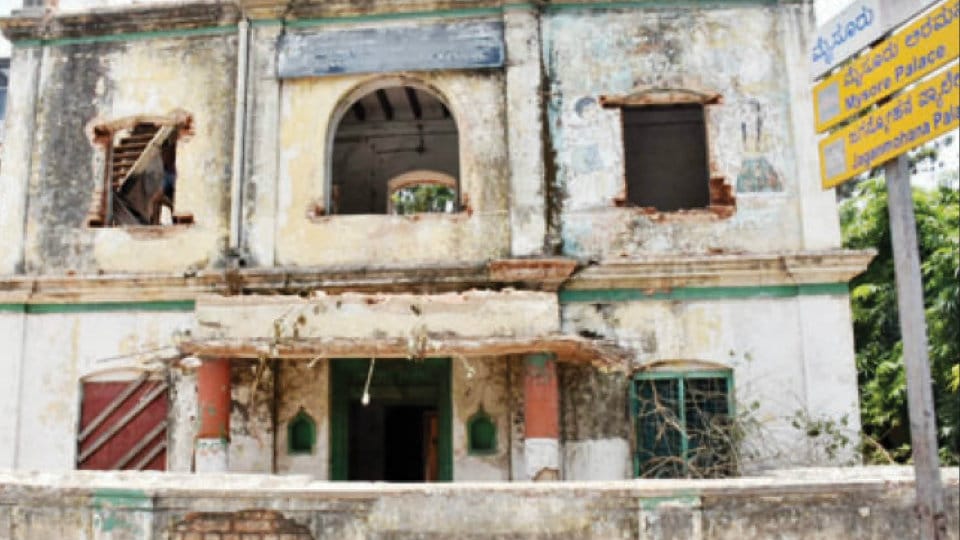 Mysuru: Even as the cries by some quarters for preserving the heritage outlook of the city is getting shriller by the day, members of the District Heritage Committee inspected the dilapidated Government Kannada School building at Nazarbad yesterday.

The Government Kannada School was functioning from a building constructed in 10 guntas of land belonging to MUDA. But School was shut 20 years ago due to poor admission and the building turned into a dilapidated state due to poor maintenance. The MUDA authorities had removed the doors and windows of the School with an objective of demolishing the building and construct a new one.

The District Heritage Committee members, upon coming to know of the poor state of the building, inspected the building on Monday. During the inspection, the members found that the building was too dilapidated for carrying out repairs, following which they decided to make their submission to the Deputy Commissioner in writing.

MUDA Commissioner said that the building has been listed as one among the 201 heritage structures of the city. But with the School closed for over 20 years and the building getting dilapidated rapidly over the years, the MUDA has planned to demolish the building and construct a new one for Passport Seva Kendra (Passport Service Centre).

After inspection of Nazarbad School building, the Heritage Committee members visited the Monolithic Nandi Statue atop Chamundi Hill following reports that a crack had developed in the statue. Later, Prof. Rangaraju said, it was noticed that the crack had already been filled.