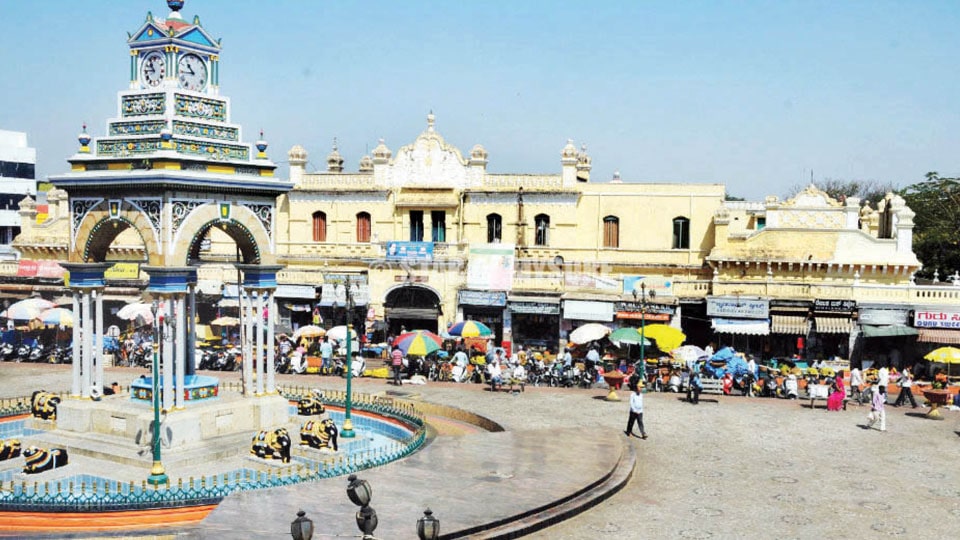 Through my past four articles in this series about the three imperilled landmarks in our city, I have placed before you the sad plight they are now in and how nothing is being done to restore them to their former glory, although they all, along with many other similar landmarks, have a very great historic importance.

Jean-Marc Mercy, a former Professor of Semiconductor Physics at the University of Montpellier in France and a frequent visitor to our city, who has made many friends in and around the Devaraja Market has written to say that this structure should be prevented from being demolished and gobbled up by land-sharks. He bemoans the decay of old buildings and the erection of new ones in Mysuru.

Another former resident of our city, Raghupathi Rao has written from Pune to say that he cherishes the memories of the many shops he used to visit in and around the Devaraja Market and hopes that the place will get a new lease of strength and life. He says that he still remembers the peculiar smell of the place which I too think has remained unchanged since the days of my own childhood!

Whenever citizens raise the issue of the renovation of our heritage structures, a blame game immediately starts with each corridor of public office passing the buck to the other. A much-used excuse to avoid doing something that is not very profitable, is the plea that they are all structures protected by the heritage tag which makes them untouchable by ordinary hands. It is a different matter that allowing them to crumble under their own weight and age is considered acceptable as collateral damage for being under special protection!

So, it clearly looks like all those who constitute the triad of politicians, bureaucrats and contractors are waiting for time to take its toll and then get the green signal to demolish them completely and resurrect them as completely new concrete monsters.

There is nothing very surprising about this as we all know very well that there is no dearth of the element of vested interest and those vested with this outstanding attribute in our country.

Meanwhile, because I have now taken up the issue of highlighting their plight, I have been receiving much feedback and many suggestions too from concerned and pained readers about what they think is the best way forward. Although I find that there are myriad variations in people’s views, there seem to be two very clear standpoints. While one says that we should not browbeat and make our heritage a very big issue, allowing it to stall our progress, the other says that we should go all out to protect it as a legacy of the past, worthy of being protected and preserved.

At a recent meeting I had with my fellow members of the Alert Citizens Team (ACT), this topic was the subject of much discussion which ended with us drawing up some very optimistic plans about which I shall talk in the days to come, after they fructify. At this meeting a few people asked what useful purpose these structures serve us to merit so much attention, both in the media and the minds of the people?

Yes, this is a very pertinent question but I feel that our heritage is not only a very essential part of our history but it is also an eyewitness to it that supports it and tells us where we have come from and the path we have traversed. A final year student at The Wadiyar Centre for Architecture, B.R. Bhoomika, who is passionate about the iconic image of our city, feels that we should have a balanced view and tread the middle path. Citing the example of her own college building and its library which have been very beautifully integrated with the architectural character of the old Ursu Boarding School building, she says that with due respect and concern for our heritage we should retain and preserve only what can be preserved and build newer structures with modern technology and design for present day utility around them.

My friend Dr. K.R. Nagabhushan, who happens to be a well-known orthopaedic surgeon of our city, feels that it is pointless to expect our heritage structures to live beyond their practical utility and so considering their prime locations, we should say goodbye to them gracefully and let them make way for newer and more utilitarian structures that can become the legacy of our time which we in turn can leave behind for the coming generations. And, it goes without saying that this tradition will go on with the passage of time. This approach no doubt makes much sense from the standpoint of all those who are practical minded about where we are going but to all those like me would have the tendency to be unduly sentimental about where we have come from, it seems more than a little painful. And, in feeling this way I am not alone because going by the volume and tone of the feedback that I am receiving, Mysureans seem to be more than a little sentimental!

But we have sat over the matter for too long and so whether we tread the first path or the second, it is certainly time now for us to stand up and start walking !

The Mystery of the Murphy Baby !

A couple of months ago while I was writing my series about vintage music, Gramaphones and radios, I had mentioned about Murphy being the leading brand of radios in our country for nearly three decades.

Murphy was a British radio and television brand based in Welwyn Garden City, England and it was founded in 1929 by Frank Murphy and E. J. Power. The company played a major role in building and supplying radio sets for the British armed forces during the World War II with their wireless set, the Model 38 and the B40 series being noted for their ruggedness and long range.  The company was amalgamated with Bush Radio in the year 1962.

In the year 1975, when I was first year medical student in Gulbarga, I too became a proud owner of a Murphy Munna, the smallest model in the Murphy range, when I won it in a lottery for just one rupee! I later gifted to my younger brother Dr. Khalid Saleem who after using it for many years still has it in perfect working condition, thanks to his unique ability to set right anything that breaks down!

And, as most of my contemporaries know very well the brand ambassador of these radios was the chubby ‘Murphy Baby’ who flashed his rather guarded smile from every magazine ad and hoarding across the country. It was only long after radios and radio ads faded from our lives and times that some of us started wondering who this kid was and what he has grown into with the passage of the years.

Yes, like all of us, he too has grown up and has now become a man! His name is Kagyur Tulku Rinpoche and in case you need a more identifiable link to his identity, he is none other than the husband of Mandakini, the film actress of the yesteryears. He used to live in Manali and he started appearing in the Murphy ads at the age of three and he was a sensation in his hometown because of his role. In case you are wondering why he was never seen in any other ad after his overpowering role for Murphy, you will be astonished to know that he became a monk and stayed in a monastery for twenty years.

Since most monks do not marry, you may now be wondering how he got married? Even I do not know the answer to this question but I intend to ask him if I bump into him which seems very unlikely. But anything can happen in this wide world. If a monk can meet a girl and get married to her, why can’t a doctor meet a former monk and ask him how he lost his monkhood !

2 COMMENTS ON THIS POST To “Heritage Structures; The Way Forward”