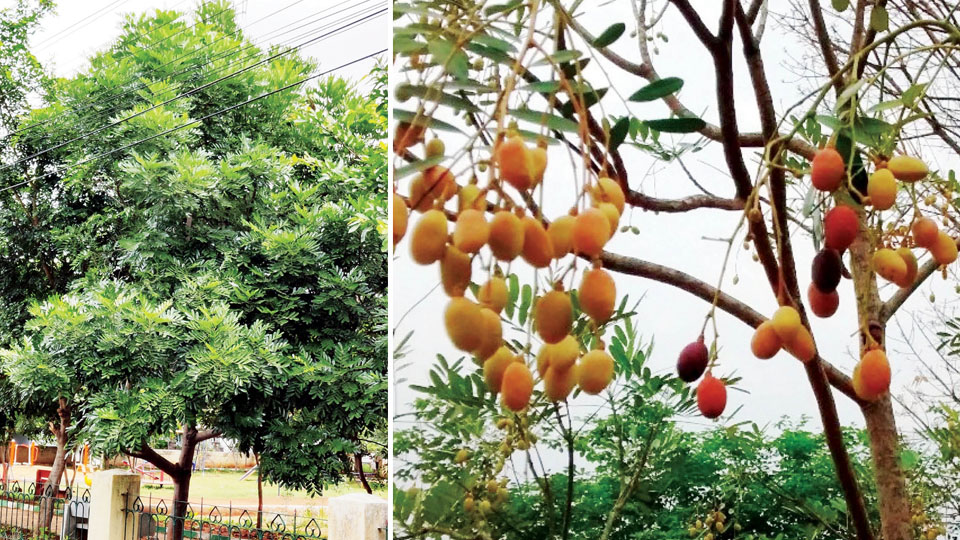 Trees of multi-utility value are grown and managed for more than one product/ output. Commonly known as Multi-Purpose Trees (MPTs), they fulfil several needs of human beings. One such tree is ‘Paradise tree’ also known as  ‘Simarouba’, ‘Oil tree’, ‘Dysentery-bark’, ‘Bitterwood’,  ‘Aceituno’ etc. It is a versatile tree as almost all plant parts are economically useful (oil production, soaps & detergents, herbal medicine, timber and fuel) besides being ornamental. In India, it is gaining importance as a herbal cure for certain type of cancer(s).  Scientific name of the tree is Simarouba glauca belonging to the family Simaroubaceae. It is an introduced tree native to Florida, South America and the Caribbean. It was brought to India by National Bureau of Plant Genetic Resources Research Station at Amravati, Maharashtra, during 1960s. Later (1986) it was  introduced to Bengaluru (University of Agricultural Sciences) and extensively studied therein for its utilitarian value.

Recognising its immense economic value to the mankind, Sri Ravishankar Guruji named the tree as ‘Lakshmi Taru’ (Lakshmi: Goddess of wealth and Taru: Tree) and the name stays on and forever in India. Needless to say the tree is patronised by Guruji  by promoting its cultivation.

The tree has immense economic value as almost all parts are useful. Mainly seeds find use commercially in Central America  for  making edible oil. It contains 60% or more unsaturated fatty acids. Oil is free from bad cholesterol and fit for human consumption.

It  is used in  bakery products besides manufacture of soaps, detergents, varnishes, cosmetics, pharmaceuticals, as biofuels, lubricants, etc. It is reported that the seed shells find use in the production of particle boards, activated charcoal and as fuel. The oil cake, a by-product, makes a good manure for the plants as it is rich in nitrogen, phosphorus and potash. The pulp and leaf litter can be used in vermin-compost production. The wood is used for boxes, crates, and  veneer production as well as furniture items. Though the fruits  are edible, they are not eaten as one cannot relish.

The tree has plenty of medicinal uses. In many Central American countries, bark & leaves are used in herbal medicine to cure viral, bacterial and protozoal diseases (malaria, fever, dysentery etc.).

The herbal medicine is supposed  to  be a powerful antibiotic with no side effects. The active compounds are supposed to be quassinoids (a kind of  triterpenes): anti-amoebic and antimalarial. Leaves are believed to possess anti-cancer properties (potent) & effective on specific types of human cancer cell lines. In this connection, it is pertinent to mention the findings of a research group at JSS Institutions (Pharmacology) in a recent publication (Asha Jose et al in ‘Front Pharmacol’, 2018 March) wherein it is reported that chloroform (SGC) and ethyl acetate (SGEA) extract fractions of leaves that have potent anti-cancer activities due to the presence of tricaproin (TCN). It is reported that  quassinoids also possess  active cancer-killing properties.  Indeed an admirable research findings by the scientists’ team of the esteemed institution!  Nevertheless there is great scope to explore the molecular mechanism responsible for cancer cell death in in-vivo conditions.

It can be propagated from seeds, cuttings, grafting and tissue culture. For germination, collect  seeds from ripened fruits and sun-dry for a week before use. Soak in water overnight and then use for sowing. Water regularly & keep the soil moist. Germination begins after 3 to 4 weeks as the seed coats are hard. Transplant the seedlings when they reach 1 ft height to plastic bags or pots.  Alternatively, seedlings can be raised directly in plastic bags. Three months old saplings are suitable for transplantation to a desired place. Seeds durability is only for few months after ripening. Hence, better to sow ripened seeds as early as possible.  Flowering usually starts after  6-8 years.