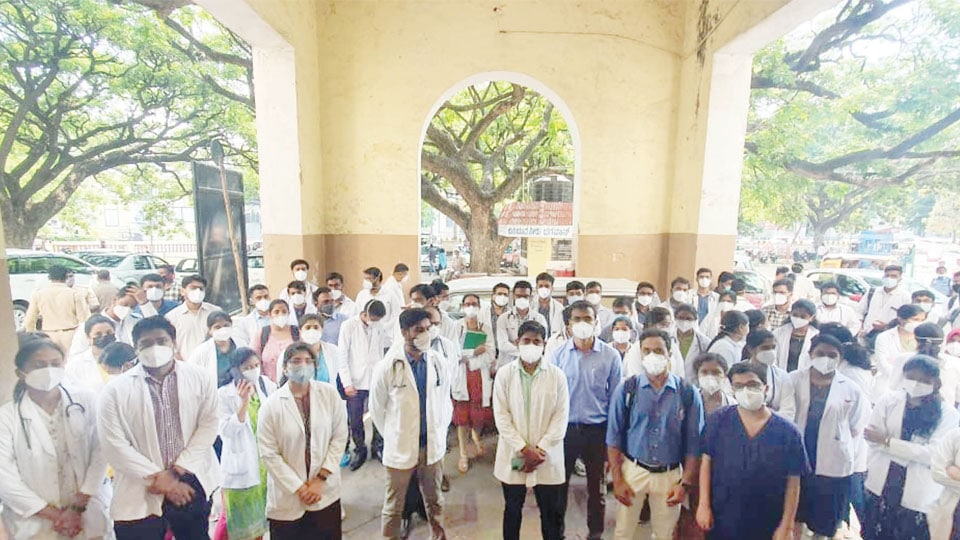 Heroes; not Unseen but certainly Unsung !

The week that has gone by has been a very traumatising and painful one for the entire medical and para-medical fraternity of the country. I say this because of the two very serious incidents we saw of hoodlums attacking the very same hospitals and doctors who were treating COVID cases amid some very steep odds, simply because they failed in saving two of their patients. While one incident happened in distant Assam, the second one occurred much nearer home in Tarikere, a small town in Chikmagalur District. Both the attacks were murderous because of the extreme brutality that has gone into them.

In Assam a frenzied mob was seen in the viral videos, kicking and bashing up a lone, helpless, young duty doctor with stout clubs and metal basins, a woman was even seen picking up a cement slab and rushing to club him with it. And, in the assault on the doctor at Tarikere, the assailants had hit him on the neck with a chopper that left him bleeding profusely. If not for the kind passersby who quickly lifted him bodily and rushed him to the nearest hospital, he would certainly have bled to his death in a  very short time.

The videos are so gruesome that you cannot watch them without quickly turning away your eyes in pain, distress and disgust. Another gut-wrenching video shows the extensive injuries that have been inflicted which makes one wonder how the two helpless doctors survived the attacks. While they will both certainly take months to recover from their physical injuries, I do not think that they will ever recover from their mental trauma which is bound to give them regular nightmares lifelong.

And, when you come to think of it, incidents like these are not few and far between in our country any longer. Even with most of them going unreported, we do hear of them with alarming frequency. While some States including ours too, took cognisance of their seriousness and frequency and framed fairly stiff special laws, the outcome has not been encouraging at all. These legislations no doubt advocate harsh penalties and mandatory imprisonment for the culprits. But sadly, the twin bug bears of them being easily bailed out and the sluggishness of our judicial process let them remain scot-free for years on end which only makes a mockery of the law itself.

Added to this, the rather strange but inherent hesitation of doctors in pursuing the cases through the almost unending legal process ensures that the culprits are never convicted. All this makes doctors and all medical establishments very soft targets. It is only when hooligans know that someone is defenceless that they dare to take the law into their hands.

Most people think that once a patient goes to a hospital or a clinic, he or she is bound to get well, which is almost as farfetched as expecting immortality. It must be understood by people that doctors and hospitals cannot guarantee a cure in any medical condition however mild, let alone in serious diseases. I say this because the simplest of medical problems can turn into some very life-threatening situations most unexpectedly, for no fault of the treating team.

How many people know that something as trivial as a common cold, that comes and goes on its own, even without any treatment, can sometimes lead to a very lethal and almost untreatable condition called viral myocarditis and cause heart failure and death? This uncertainty about the progress of every disease is the biggest difficulty doctors face in their work, day in and day out and very often it leads to problems with the patients’ relatives.

They are unable to accept the fact that the patient could not be saved even after they were made to spend much money on his or her treatment and so they turn their wrath on the treating team. Very often, the trouble starts when the hospital presents the bill which is always perceived as very high if the outcome of treatment has not been good!

But despite the brutality meted out to doctors from time-to-time, doctors do not resort to extreme ways of protesting like going on snap strikes and stopping medical services, to urge the Government to come up with satisfactory solutions to their problems. This is because they feel that they are life-savers first and therefore they should not endanger lives through anything that they do, even under extreme pressure and provocation. This is the noble stuff doctors are made of and it is indeed sad that their nobility is not being recognised by the multitudes they treat.

Right now, doctors and para-medical workers are fighting their toughest battle, with many of them sacrificing their lives in the process. Eighty-eight doctors have died of COVID in Karnataka itself over the past fourteen months and I have a list of all their names with me. Just as many or even more para-medical personnel too have died. A great many of them contracted the deadly infection while they were discharging their duties.

Only those who have been admitted to hospitals because of COVID and who have seen the struggle that goes on there behind closed doors, to save lives against all odds, will understand their sterling contribution to society. This is the time when most private hospitals are being run in accordance with whatever guidelines the Government has stipulated. And, mind you, even if I use the mildest term, they are indeed very harsh conditions.

Today, many owners of private hospitals are in such a stressful state and financial mess because of unpaid bills and long-pending payments of patients treated under Government welfare schemes over many months, that they do not mind closing down their hospitals and converting them into something different like schools or colleges or even letting them out as office spaces. Yet, in a spirit of exemplary service, they have chosen to stay on in the war against COVID and serve the society.

But I feel that this sad state of affairs should end now. The medical fraternity should become a little more aggressive and demand that the Central and State Governments should immediately come up with some very stringent laws to effectively curb violence against doctors and medical establishments. The only way to do this is to devise something on the lines of TADA where bail should not be available to anyone against whom there is prima facie evidence of lawlessness.

For the service that medical establishments are rendering to society and how essential they are for the good health of citizens, this is the minimum that needs to be done to protect them. And, to ensure that their rights are protected and ensure that they do not become helpless targets, doctors should form professional associations in every district across the country which can present a united front that can effectively resist violence and vandalism.

Thankfully, we here in Mysuru, took this novel step and formed MAHAN (The Mysore Association of Hospitals, Nursing Homes, Clinics and Diagnostic Centres) five years ago, which I am now heading as its President. This new-found unity has strengthened us to collectively face any injustice and harassment that may come our way and also interact with the Government agencies in following up the progress of the cases that we register against any attacks on us or our establishments.

That was when an astonished and grateful Winston Churchill, the then Prime Minister, in his address to the nation on 20th August, 1940 said, “Never before in the field of human conflict has so much been owed by so many to so few.” He called it Britain’s ‘Finest Hour’! The ‘few’ he was referring to were the fighter and bomber pilots of the RAF and his compliment made such an impact that the word he used has remained the sobriquet by which they are still referred to! So now, even seventy-five years after the war ended, when someone in Britain talks of ‘The Few’, it is the men and women of the RAF that they are referring to!

Similarly, we are right now facing a time of great peril and despair because the entire world is certainly going through its biggest crisis. No war, no famine, no pestilence, no hurricane, no earthquake and no tsunami has had such a widespread and enduring destructive effect on mankind. But for the doctors and every one of their associates this is their ‘Finest Hour’ through which they are shining bright, across the globe!

So, I do not think I would be wrong if I say that “Never before in the field of human crisis have so many owed so much to so few”! Please do think about it!