Home » Columns » My last meeting with Prof. B. Sheik Ali 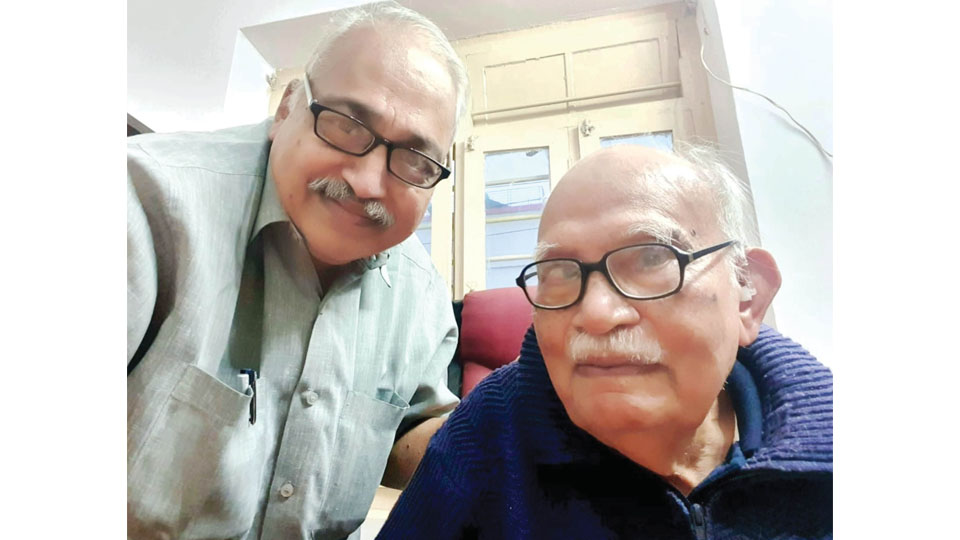 My last meeting with Prof. B. Sheik Ali

I have had a fairly long standing and frequent interaction with Prof. B. Sheik Ali, the nonagenarian doyen of history who bid adieu to this world on last Thursday. Although there was an unusually wide gulf of difference in our ages, to enable us to call ourselves two friends, the connecting thread of friendship between the two of us was the love of books we both had. To this you can add the penchant we both had for reminiscing about the past, which we both used to do almost endlessly! He was a historian in the true sense of the word…….always immersed in the past!

This had indeed made us close friends and whenever I visited him at his house in Saraswathipuram for a chat, he would be in no hurry to wind it up and see me off. On the contrary, at every visit, whenever I got up to go, he would always prevail upon me to stay a wee bit longer, while constantly apologising about his inability to offer me even a cup of tea.

Yes, he led a very solitary existence, perhaps by his own choice, but he was seemingly very content with just the company of the books and the bits and pieces of memorabilia that surrounded him in his study. When you come to think of it, as every book lover would love to acknowledge, books can be our best friends because they have all the qualities that one can ask for in good friends.

For instance, they provide us with outstandingly enjoyable company and comfort, without asking for anything from us in return. They do not crave for any attention and they do not complain about being left alone when you decide to keep them aside. And, most importantly, they are a one-time investment and unlike most other kinds of friends, they are extremely long lasting. That is unless they get borrowed by someone who is not in the habit of returning borrowed books!

Coming back to Prof. Sheik Ali, despite the great love of books that was lost between us, it would be wrong to say here that we used to exchange books. Although this used to happen at times, it was almost always a one-sided affair. I say this because I would invariably borrow books from him more often rather than lend them to him! And, there’s a reason for this too. I always had more time to read books than what he had because of his constant and passionate involvement in writing books.

Almost all the books I used to borrow from his collection were very rare ones that are now completely out of print and therefore unavailable anywhere else. It was to return one such extremely rare book, a biography of the Prophet of Islam, that I went to see him on the 9th of last month. When I told my wife that I was going to see him, she said that because it was the last day of Moharram, she would pack for him some Khichda, the traditional all-in-one dish that is prepared in most Muslim households on that day. When I gave this package to him, he became a little emotional and told me that despite being alone, he would now be able to relive the Moharram tradition, a thing that he had not been able to do for many years.

After a fairly long and very interesting interaction, when I told him that I had come to return the book that I had borrowed from him, he asked me how I liked it. When I told him that I found the book very interesting and that after reading it, I had been trying in vain to procure a copy of it for myself, he smiled and said, “Dr. Saheb, you can have this copy of mine as a gift from me!”

So saying, before I could recover from my feeling of absolute surprise, he opened the fly leaf of the book and wrote: ‘With compliments to Dr. K. Javeed Nayeem, an asset to the community’ and he stood up and handed the book to me with a wide smile! After he sat down, I clicked a picture of his when he sprang another surprise.

He suddenly said: “Dr. Saheb, let’s have a selfie!” I almost missed a heartbeat. Most people wish to be photographed with famous people and here was this famous grand-old-man of Mysuru who wanted a selfie with me! That too, a selfie on my phone, that he, with his complete lack of connection with smartphones, would never be able to share with anyone!

You may not believe me but although I can call myself a man whose prime hobby is photography, I’m just no good at taking selfies as I’ve almost never attempted it. The embarrassing result was that in the process of getting both of us into the frame, I dropped my mobile down twice before I could manage to get two pictures successfully. That was my last meeting with the historian, who just twenty-three days later, bid goodbye to this world and has now become a part of history! May Allah, Almighty, grant him eternal rest. Ameen!

5 COMMENTS ON THIS POST To “My last meeting with Prof. B. Sheik Ali”