Home » Columns » Of Men and Beasts! 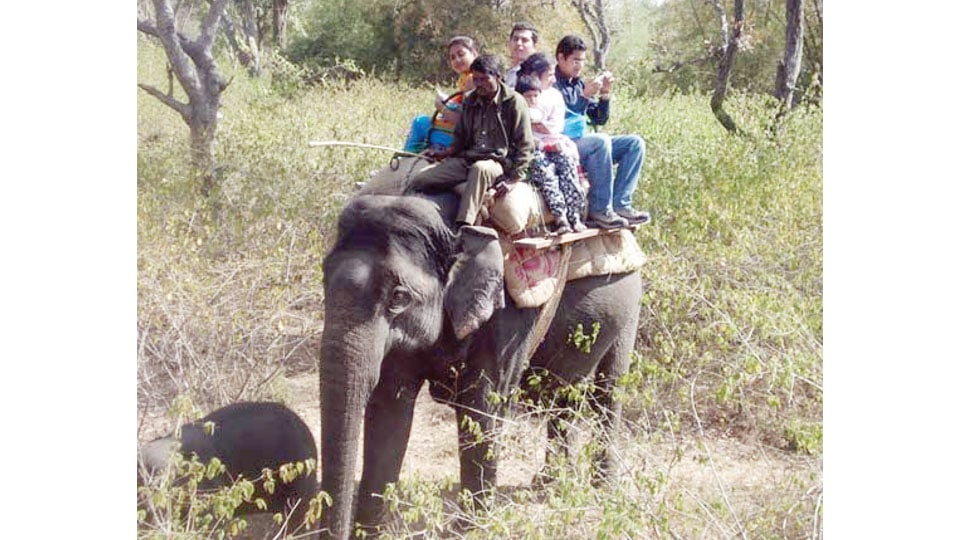 Of Men and Beasts!

There was a report two days ago that the elephant safari at the Bandipur National Park, which had been stopped for some years, would be resumed soon. This, I am told, is to put to good use the excess number of tamed elephants that are now overcrowding the nearby Rampura elephant camp and exceeding the permissible number there. While the accommodation there is only for fifteen elephants as per a High Court directive, the camp reportedly has twenty-three elephants right now.

The elephant safari had been stopped because of some logistic difficulties at Bandipur and a lack of sufficient water to keep the pachyderms happy there. Now, with good rains over the past four years, and the sufficient availability of water, this safari is being resumed.

It was hugely popular with all visitors to Bandipur over the years as it would offer a slow and leisurely ride on elephant-back across the deeper reaches of the park to which vehicles did not have access. It resulted in better sightings too because unlike noisy vehicle safaris, it did not disturb                       the animals.

There were two versions of it, with one lasting just twenty minutes and the other lasting an hour. To me even the longer one used to seem too short because it used to be such an enjoyable experience. Although it is still not clear which version of it is going to be made available, it is still heartening news that this ‘Jumbo Safari’ is going to be resumed soon.

Elephant safaris which are unique to Indian wildlife sanctuaries, have always been the star attraction for wildlife enthusiasts visiting them because in addition to their novelty of recreating an experience from the days of our royalty, and because as I have already said, they invariably offer better sightings of wildlife. Their much elevated perspective, as compared to what jeeps and buses can offer, is clearly an added advantage.

The biggest benefit however, as I see it, is that because of their very limited seating and also because the riders are forewarned not to be noisy, for fear of irritating their ‘live vehicles’, they offer a very tranquil experience! You will not have any of the screaming and shouting that jar your senses and mar your pleasure the moment an animal or bird is sighted, when you are in a safari jeep or bus. So, with this kind of safari all set to reopen, I am looking forward once again to an experience that I used to immensely enjoy in the past.

READ ALSO  Do we need to stoop to Casino Tourism?

On the lighter side, I would like to point out here that I once had a slightly unnerving experience when the young male elephant I was riding, instead of sticking to its traditional, trodden path, started going in pursuit of a young female that it saw grazing in the depths of the forest. Our mahout had a pretty difficult time in coaxing and cajoling it to stop being a wayward Casanova and return to its assigned, more sedate duties. It is not surprising that animals are so much like humans!

While talking of Bandipur, which enjoys a very prime location between Mysuru and Ooty, the two most sought-after tourist hubs in the region, I am sad to say that by way of the basic facilities that tourists need, it lacks them miserably. Except for those who have a reservation for accommodation, all the other tourists are left to fend for themselves, with absolutely no place to eat, rest or even relieve themselves in a time of need as they are not allowed to use the toilets close to the reception area. The result is what is inevitable.

Basic biological need overtakes modesty and decorum and you can see people peeing against tree trunks all along the road that traverses the park. The dormitories and cottages too are in a most miserable state with almost no maintenance and upkeep. The catering facilities were never good at any time and I don’t think they are any better now.

I wonder whether this sad state of affairs is deliberately orchestrated to discourage visitors, with the lofty and noble idea of not disturbing the wildlife there!

Talking of men and elephants, I would like to point out another kind of interaction between the two of God’s creations. I am referring to the ongoing man-animal conflict that is raging in areas where agricultural lands abut forested areas. Although it has always been there, of late it has become the nidus of a bitter confrontation with no end in sight. It is so bad in some coffee growing areas of Kodagu and Hassan Districts that all agricultural and plantation activities have almost come to a standstill since the last three years.

People are being mauled to death by elephants on a regular basis and the fear of death haunts all those who live there. Estate workers are steadily migrating away to safer areas, badly hampering local commerce and economy.

In this very serious matter, successive Governments have all seemed to be in a state of deep slumber and have done almost nothing concrete with a sense of determination to end the problem. This already ugly situation, which when you come to think of it is actually a ‘man versus man’ conflict, between agriculturists and over-zealous animal rights activists, is all set to take an uglier turn.

While the agriculturists aver that they have the right to eke out their livelihood unmolested, on the lands they rightfully own, the animal rights activists, whose numbers are increasing, aver that animals too have a right to unmolested existence. The poor animals on their part, simply cannot understand why they cannot graze on the other side of the fence where the grass seems greener and the fruits seem so abundant and luscious. So, they think nothing of intruding onto what attracts them most.  It is clearly a case of forbidden fruit always seeming more tempting and when the first man on earth could not resist it, how can we humans expect animals to keep away from it?

So, the plain truth is that animal instincts always have an upper hand, irrespective of whether they dwell in animals or humans!

4 COMMENTS ON THIS POST To “Of Men and Beasts!”