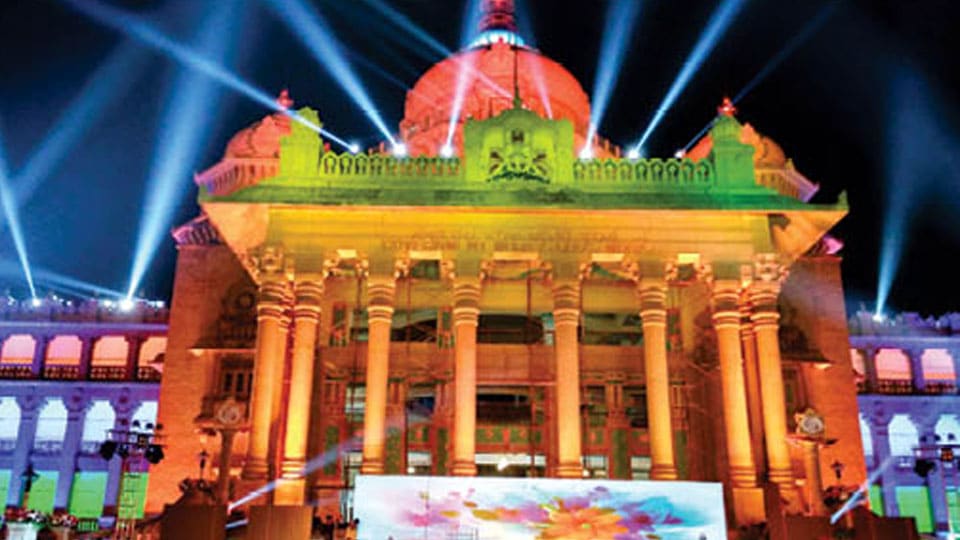 Of hitherto unheard and unseen extravagance

The Diamond Jubilee celebrations of the Vidhana Soudha, our Secretariat building, have just gone by. It is the seat of power and pelf from where our elected and nominated netas dictate terms even to the highest and the mightiest among us. It is also the place from where they dole out welfare schemes which are supposed to do much good to all lesser mortals who can only gaze at the imposing edifice and wonder what it looks like from within.

Deeply inscribed on the front facade of this very imposing building is the very noble inscription that ‘Government work is God’s work’ although no one who works inside seems to keep this in mind while going about his or her work. Actually, some of them seem to think and believe that what the inscription means is that it is God’s job to do government work! But they certainly seem to agree on one thing…that God and Godliness are best kept at a safe and comfortable distance while working there! Considering the extremely slow pace at which all un-greased files move through its corridors, most people feel that the Vidhana Soudha should actually be rechristened the Nidhana Soudha!

The Diamond Jubilee celebrations have churned out many controversies over the extravagance that went into them and also in the way some of the VIPs were treated or not treated when they attended it. The original cost of the bash which was estimated to be about twenty- five times the cost at which the building itself was constructed was quickly scaled down when the powers that be sensed that it would generate an outrage close to election time that is best avoided. The original plan to distribute gold biscuits to Ministers and legislators was shelved in favour of serving ordinary, edible biscuits with tea to all and sundry!

But what stood out like a very sore and malodorous thumb was the fact that the lunch that was served to about 3000 people came at a whopping Rs. 3000 per plate! There is nothing very surprising about figures like this as most political lunches and dinners come at a cost that seems unimaginable to most of us.

Recently the Aam Aadmi Party (AAP) which actually was launched amid the much hyped, noble intention of sweeping away corruption from our country, was itself held guilty of spending Rs. 2000 per plate for a dinner that it arranged for its cadres and well-wishers at a posh hotel in the national capital.  I wonder who the lucky caterers were at the Vidhana Soudha bash and what they served. Did they embellish what they dished out with gold foil and gold dust like in the days of our erstwhile Maharajas? Or did they serve food on silver plates which the guests were allowed to take away with them after eating? I also wonder how long and murky the trial of kickbacks was!

Each plate of food served there must certainly have been priced to feed many well-fed people behind the scenes. While most other invitees did not miss it, members of the JD(S) made heroes of themselves by announcing that they would stay away from the lunch in protest against its huge cost… again a very timely and appropriate act considering that it may come in handy during election time!

But leaving aside all that was seen as bad about the function I felt happy that one tiny act stood out like a very good and even noble deed. Three engineers who were among all those who toiled to build our Vidhana Soudha and had grown old with it, were very thoughtfully remembered and invited for the function. The press too highlighted their role very appropriately which I’m sure has made the trio feel just as happy as it made me feel.

And about austerity of a new kind…

Having talked of extravagance I consider it appropriate and timely to also talk of a new kind of austerity that I have noticed over the past few days. I am talking of the restrictions that the tiny Marwari Jain community has imposed on itself from within its echelons. The most noticeable outcome of this has been the way its members celebrated Diwali this year. Their Diwali which used to be their only major and most noticeable festival has been growing less and less noticeable over the past few years.

But this year I think they exercised the greatest restraint. When I asked the reason for this, Chandragupta Jain, one of my many close friends from among the Marwari Jain community, told me that this has been done with a twofold purpose. Firstly, with a sense of concern for the environment and secondly with a concern to avoid inflicting pain on animals and birds. It is a well-known fact that all fireworks cause a great deal of atmospheric pollution and firecrackers in particular cause a great deal of agony to pets and domestic animals and also to birds that nest in and around towns and cities.

The result of this self-imposed ban was that the entire stretch of Ashoka Road where a large number of their community reside and do business which hitherto used to be the prime locale for their Diwali was an almost silent zone on Diwali day. When I drove along this road the next morning it had none of the colourful paper residue that crackers leave behind. In fact it was so spick and span that it seemed to have been swept clean just then.

I am told that their community has of late also effectively imposed a ban on very lavish weddings. So the next time you happen to walk into a Marwari Jain wedding do not be too surprised if you notice that the food served there seems much simpler than what you expected and also if you do not see any singing and dancing. It is something for which their entire community should be congratulated and it is a change that all of us need to emulate and incorporate in our own lives. Turbans off to them for starting a new trend and thus setting a noble example!