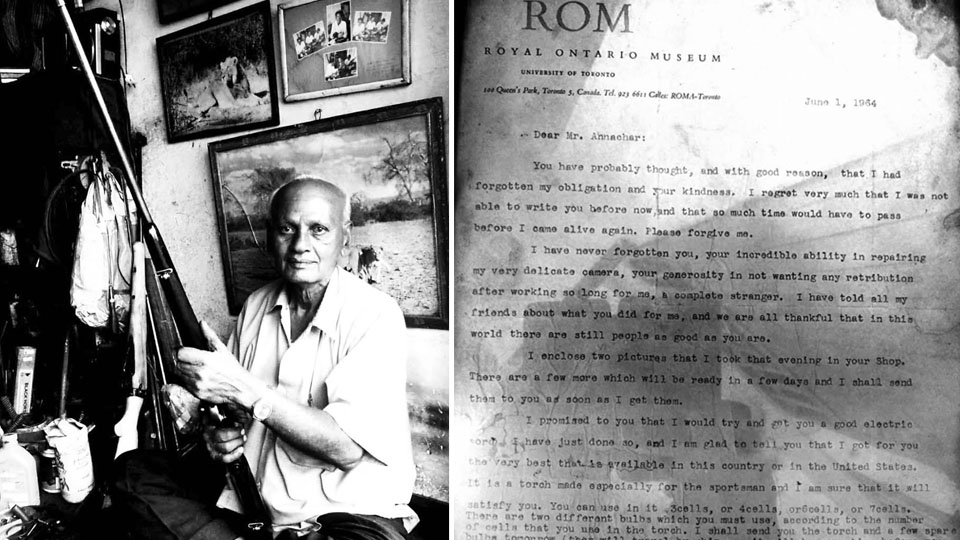 Of Good Old Guns and Gunsmiths !

In his column Nostalgically Speaking, on the 13th September, KBG has written about S.G. Sanath Kumar, the former Head Master of the Hardwicke High School who was also a gun lover and shikar enthusiast of the yesteryears. Among many other things, KBG has also mentioned at the end of his article, how when he once wanted to get his gun repaired, Sanath Kumar with his knowledge of guns, had directed him to a gun repairer, Annachari on Irwin Road. Being a gun lover myself, albeit without being a hunter, I thought I should write about the gunsmiths in our city whom I have known.

The Annachari that we are talking about here is actually the late D. Keshava who passed away about three years ago. He was known even to most people who knew him well, only as Annachar although the real Annachar was his father who passed away in the year 1977. This father and son duo who were then the only gunsmiths in Mysore during their time, had their tiny shop called Annachar Gun Repairers on Irwin Road in the Kalamma Temple building and to me this was the most interesting shop that I would always peep into, every time I happened to pass that way ever since I was a little kid.

Annachar and his son Keshava used to sit bowed over their work on either side of their workplace and they used to have an array of guns of different kinds, hanging upside down on all their three walls which looked very fascinating to me. Even now, any gun shop anywhere, has the power to stop me in my tracks!

Yes, my interest in guns is not acquired. It has grown up with me right from my childhood simply because ours was a family of coffee planters hailing from Chikmagalur and guns were an ordinary part of our lives like our other household things like pots and pans. Even to this day, this tradition continues in almost all plantation households and most planters are not considered real planters unless they also hold a gun licence and at least one gun in addition to holding on to their estates!

Although I had grown up playing with airguns, I acquired my first real gun when my father transferred his favourite and long serving double barrelled gun to me in the year 1979 when I was a final year medical student. Understandably, it was one of my proudest moments which I still remember to this day. That was the day I was allowed to march into the Deputy Commissioner’s Office at Chikmagalur with my gun so that it could be inspected and its particulars entered into my brand new gun licence! That was an act of initiation into adulthood, performed only after I had acquired enough responsibility and the requisite skills in safely handling guns with many years of training under my father’s watchful eye.

My five year stint in the NCC was an added qualification that I could boast of then and my NCC certificates made my quest for a gun licence much easier for me. After I became a licenced gun owner residing in Mysore, almost all my relatives who needed their guns to be repaired used to turn to me for assistance. They would leave their guns at the Annachar gun shop and entrust me with the responsibility of following up the progress of the work, a job that I would only love to do even uninvited! I would never go past that shop without stepping in to see what good old Keshava was doing, sitting cross-legged on a tattered reed mat. Very soon into our association he realised that apart from my interest in guns I was also an ardent admirer of his capabilities as a craftsman in his field. Yes, any relationship that is born between the admirer and the admired is understandably always very strong and long lasting! This realisation cemented a strong bond between us too and if I failed to see him for a few days he would always greet me with a broad grin and his standard lament: “Yen sir, yesht divasa aaithu neevu eekadey bandu, nammanu marthe bittideeri hogi neevu!” (What Sir, how many days have passed since you came this way! It’s sad that you seem to have forgotten me!).

Thankfully since his shop was bang on my way to my place of learning while I was doing my MD, these occasions for him to complain like this used to be quite rare. Spending a few moments with him used to be some of my most relaxing stops because we would talk of everything under the sun that was even remotely related to guns and the great hunters of yore that Mysore had seen in its hoary past. He was great storyteller and he had some very interesting tales in his repertoire of shikar tales. Displayed just behind his humble seat were a few faded, black and white photos of these long gone souls with their great guns and the animals they had hunted and most notably a letter of appreciation from Ario Gatti, the then curator of the Royal Ontario Museum, dated June, 1, 1964 addressed to his father. The gentleman had written to thank him for the ability with which he had repaired his sophisticated movie camera when it had broken down while he was filming wild animals in the Bandipur forest.

He goes on to say in his very sentimentally worded letter that his help to a complete stranger, without accepting any charges whatsoever, would be remembered forever. He has written that as a token of gratitude he was sending him a very durable sportsman’s torch as a gift! This being not enough, in the very same letter he has written detailed instructions on how to change its light bulb with a hand drawn picture of the delicate spring that should not be lost, without which his priceless gift would become completely useless! This gentleman had come from Canada to Mysore as a guest of the Van Ingen brothers who were the Maharaja’s taxidermists with international fame.

Keshava too like his father was a very capable worker, extremely good at restoring some of the most sophisticated guns that came to him for repair and getting them back in working order even when hopelessly broken down. Since spare parts for guns are usually not available he invariably used to fabricate them himself, using very simple hand-made tools which too he would himself make! Now that he is gone my guns and I miss him very dearly.

His young son K. Raghavendra whom everyone knows only as Raghu is also a capable gunsmith having learnt the difficult art from his late father. But he is not in the trade because he has not got his gun repairing licence yet although he is in the process of acquiring one.

There is one other gunsmith, Krishnarajendra in our city. He is also a licenced arms and ammunition dealer and he has his shop The Mysore Armoury on K.T. Street. Starting off as a very capable competition shooter who has won many trophies at many events, Krishna is a self taught gunsmith. He began to tinker with his own guns to keep them shooting and about twenty years ago he became a licensed gunsmith and there has been no looking back since then. He has his regular clientele of customers who come to him from far and wide especially from the gun-owning hinterlands of Kodagu, Chamarajanagar and H.D. Kote. He is known to be particularly adept at the rare ability of making the fine precision adjustments to the sights and triggers of competition rifles and many people approach him for this help.

The trigger of his own .22 rifle is so delicately tuned that it can be fired with just a feather touch that does not disturb its aim even slightly. This has made his otherwise ordinary, low cost Indian rifle an extraordinary performer that has won him many prizes even while pitched against many shooters having high prized imported competition rifles!