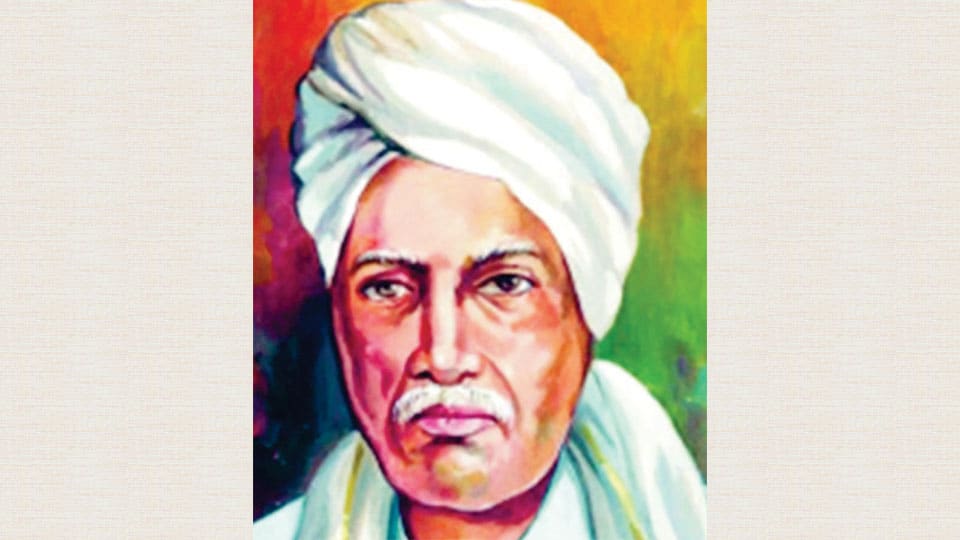 Homage to another Savant: Deputy Channabasappa

Some of the readers of Star of Mysore, while appreciating and admiring my write-up on Aloor Venkatarao have asked me why I have omitted stalwarts like Deputy Channabasappa, Muduveedu Krishnarao and others. Actually I had these savants in mind and had thought of paying homage to them in course of time. In deference to the opinion of these well-meaning readers, today’s write-up is dedicated to Deputy Channabasappa, who played a significant role in the Karnataka Unification Movement in early stages.

Channapasappa Lingappa (1833 – 1881) was born in an ordinary family of Dharwad. Unfortunately, he lost his father at the age of six and naturally grew under the care of his mother. At a later date when he had become popular, people used to ask him the secret of his dedicated service and his firm reply was “My Mother’s Commandments.” Though faced by difficulties, without losing heart, he took them as challenges. After completing his early education at Dharwad, he went to Poona for higher education and joined an Engineering College there. This young and brilliant student attracted the attention of a philanthropist at Poona. This helped Channabasappa to work hard with dedication. He completed his course and was appointed as a teacher in a College. During this short period he earned good name as a teacher both by the students and the management.

Everybody thought that Channabasappa had settled down in Poona with all comforts. But the young man was not happy. As days went by, he realised that the Marathi-speaking people liked him as an individual but not as a man from Kannada-speaking area. They were showing scant respect to Kannada-speaking people and did not lose any opportunity to insult the Kannadigas. By about this time during the British rule there was a cry for reorganisation of States on the basis of languages. Bengal and Assam were in the forefront of this movement. The British could not wipe out this linguistic sentimental movement and Lord Curzon had to yield to the public opinion and the division of Bengal took place and this encouraged the ambition among other people also to dream of States on the basis of languages. But what is important is that Channabasappa too entertained this idea much earlier than the Bengalis and Assamese. But this was not encouraged and he did not get the required support from the people.

Harbinger of the Unification Movement

When this idea came to him while he was in Poona, he decided to leave Poona for good and get back to Karnataka. Thus he can be called as the harbinger of the Unification Movement which became stronger and wide-spread later under the guidance of other stalwarts.

Channabasappa gave up the job at Poona and returned to Dharwad. He joined the Post Office and worked there for some time. Because of his qualification and experience, he could easily get a teacher’s job in the Department of Education.

Subsequently, he became the Principal of a School at Belgaum. Under his Principalship, this School became a Model School and Channabasappa was recognised as a good educational administrator. Five years later he was promoted as Deputy Inspector of Schools in Dharwad – Belgaum area. This gave him an opportunity to implement his schemes to develop Kannada as a subject of study among the students. The first thing that attracted his attention was the language policy in that area. Kannada teaching schools were rare. More than that, even the Kannadigas had to study Marathi as a compulsory subject and the study of Kannada was not encouraged. He made arrangements for the teaching of Kannada in the Schools of this area by appointing Kannada Pandits. He also got Kannada text books written and printed them for the learning of Kannada in particular and development of Kannada in general. This brought great fame to Channabasappa.

As Deputy Inspector of Education, he was a strict officer insisting on discipline among the students and teachers. Once he went to a School for inspection and found the teacher highly indisciplined. Even the Head Master could not control him. After an enquiry, Channabasappa imposed a fine of Rs.2 on the teacher. In the evening the teacher went to his house and explained his poverty and the real value of Rs.2 for his family and its impact on his home. Channabasappa became remorseful and told the teacher that he has committed a mistake and as per the rules he was compelled to levy a fine which is fair. It cannot be withdrawn.

The next morning when the teacher went to the School, the Head Master told him that somebody had paid the fine on his behalf and warned him to be careful in future. Obviously, Deputy Inspector Channabasappa did not like to punish the family of the teacher and hence he himself paid the fine and relieved the anxiety of the teacher.

Channabasappa was a common name in Dharwad area and to distinguish him, people began calling him as Deputy Channabasappa and that name stuck to him as an honour. In addition to his duties, he lectured on the significance of the magic name Karnataka which alone could unite the Kannada-speaking people politically, emotionally and culturally. In fact, he encouraged many persons like Gangadhara Turamur, Venkatarango Katti and others to take up the work for Karnataka. He also translated two Shakespeare’s plays into Kannada and wrote many articles on Mathematics in Kannada. Thus he became a one-man army in the early stages of Karnataka Unification Movement which gained momentum in the later decades.

Unfortunately, he did not live long to see the formation of the State of Karnataka. He laid firm foundations for the development of Dharwad as a cultural capital of North Karnataka. It is unfortunate that the Government of Karnataka has not thought it fit to commemorate this savant in a suitable way. That is the need of the hour.

18 COMMENTS ON THIS POST To “Homage to another Savant: Deputy Channabasappa”