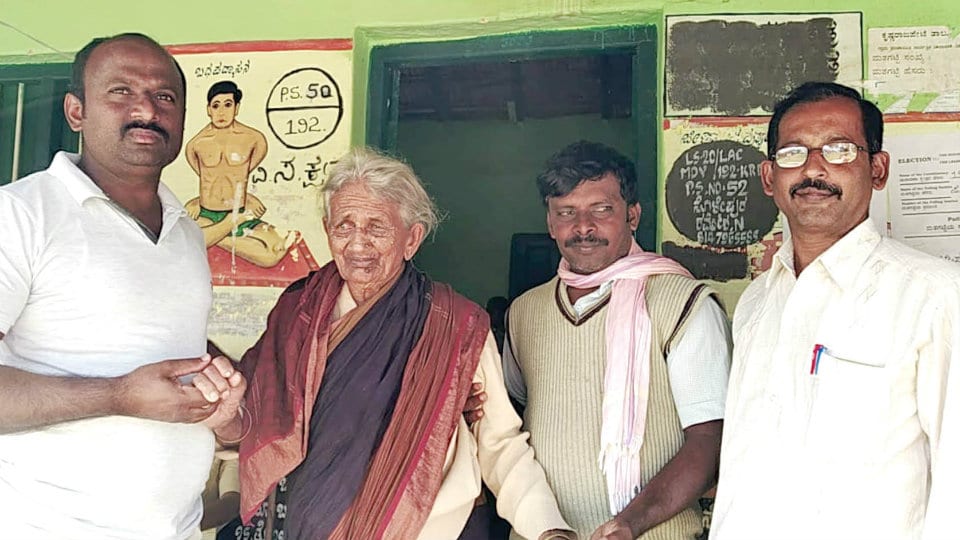 Voting begins on a moderate note; picks up as day progressed

K.R. Pet: Voting in Krishnarajapet (K.R. Pet) General Assembly segment in Mandya district began on a moderate note at 7 am today. As it is considered as a sensitive constituency, the Police had shut down all hotels, resorts, bakeries and restaurants as a precautionary measure. This move was, however, criticised by the people who were desperate for food.

The by-poll was necessitated after K.C. Narayanagowda who was elected on a JD(S) ticket in the 2018 Assembly polls defected and later disqualified. Narayanagowda is contesting on BJP ticket.

There are seven candidates in the fray including K.C. Narayanagowda (BJP), K.B. Chandrasekhar (Congress), B.L. Devaraj (JD-S). The constituency is witnessing a triangular contest between the BJP, Congress and JD(S).

K.C. Narayanagowda, his wife Devakki and daughter Neha cast their vote at a polling booth in Government Girls PU College. K.B. Chandrasekhar, a former MLA and his wife Ramamani also cast their vote at the same booth while B.L. Devaraj cast his vote at his native village Bandihole.

Voting in Bandihole was delayed by 40 minutes due to a fault in the EVM and Devaraj had to wait for half-an-hour to exercise his franchise. A total of 258 polling booths have been set up across the constituency, with 65 of them considered as sensitive and hyper-sensitive.

The constituency recorded just 6.2 percent voting in the first two hours (till 9am). However, polling picked up as the day progressed and the voter turnout reached 39.47percent by 1 pm. The voting is expected to gain further momentum by afternoon.

A centenarian woman was among the voters at Sollepura village in Kikkeri Hobli of the Taluk. The 106-year old Sannamma exercised her franchise with the help of her grand children and became an inspiration for youth.

Polling was by and large peaceful with authorities making tight security arrangements for ensuring free and fair polls. However the action of the Police to forcefully shut down hotels, restaurants, bakeries and other eateries in K.R. Pet drew sharp criticism from the people and the hotel owners.

Election authorities had declared a dry period for 48 hours from 6 pm on Dec.3 to 6 pm today. Considering the sensitive nature of K.R. Pet Assembly, the District Administration extended the dry period in the surrounding constituencies of Pandavapura, Nagamangala and Srirangapatna, banning sale, transportation and stocking of liquor.

All the EVMs used in the by-polls, will be brought to the Government Polytechnic College for demustering.