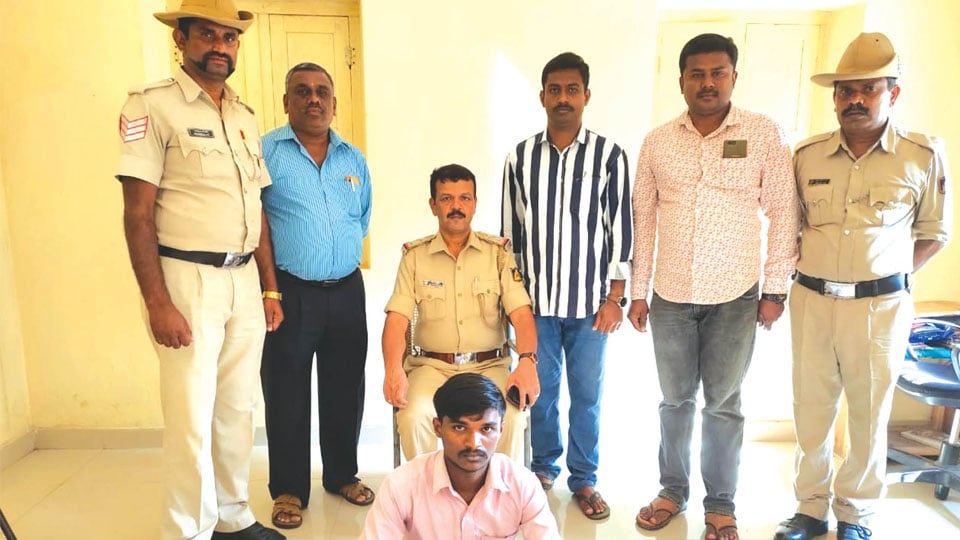 Srirangapatna: A wayward son, who had stabbed his mother to death for advising him on his birthday, has been arrested by Srirangapatna Rural Police and Mandya Superintendent of Police has suspended three Police personnel including the Sub-Inspector (SI) on charges of dereliction of duty in the case.

While the arrested is 23-year-old Prajwal, the suspended Cops are Sub-Inspector Muddumahadeva and Constables Nagaraju and Papanna.

On Nov.29, the day of Prajwal’s birthday, his mother Amala Mary advised him not to fall prey to bad habits and stay away from bad friends which irked Prajwal and began to argue with his mother. When the argument escalated, Prajwal picked up a knife and stabbed his mother on her stomach and thigh injuring her seriously.

Mary’s second son Rohan, who rushed home on learning about the incident, rushed her to Srirangapatna General Hospital, where the doctors called Srirangapatna Town Police Station and asked them to register a case. But SI Muddumahadeva and Constables Nagaraju and Papanna did not register a case.

Mary was then shifted to K.R. Hospital in Mysuru for further treatment where she succumbed to injuries and the hospital staff informed about the death to Mysuru Police. But when Mysuru Police sought information pertaining to the case with Srirangapatna Town Police, they (Mysuru Police) came to know that no case was registered there.

Mandya SP Parashuram, who learnt about it, suspended the Sub-Inspector and two Constables on charges of dereliction of duty.

SP Parashuram, speaking to Star of Mysore, said that there are very less chances of stabbed victims recovering and the Police, if they could not take the statement of the victim could have taken the statement of the doctor treating the victim and registered a case, which the SI and two Constables did not do thus displaying dereliction of duty.

In this backdrop, an order was issued suspending the three Police personnel, the SP added.