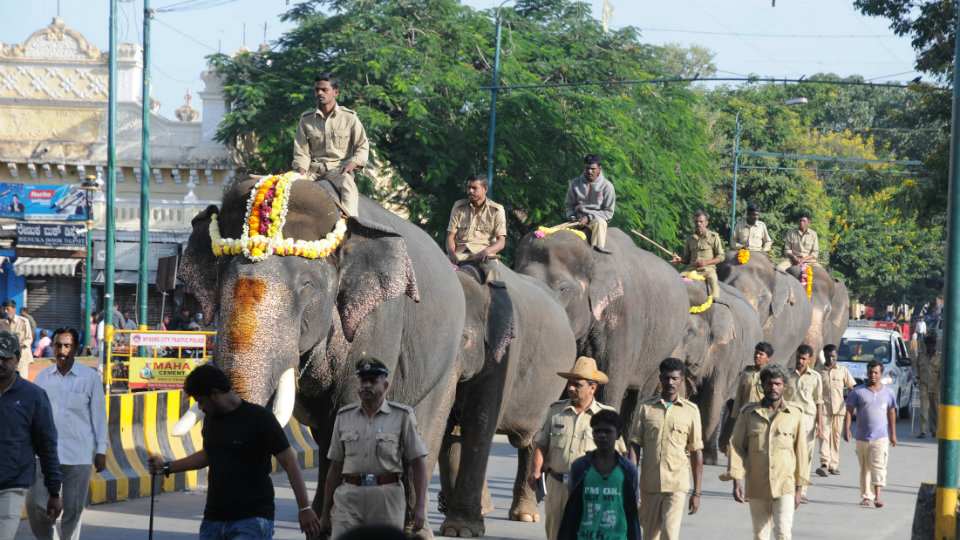 Mysuru: The first batch of six Dasara elephants, which arrived in Mysuru on Sept. 2 and were welcomed into Mysore Palace yesterday, underwent weight checking this morning as they have to undergo rigorous training for Jumboo Savari from tomorrow.

Today, the elephants were brought from the Mysore Palace to Sri Sairam and Co., Electronic Weighing Centre on Dhanvanthri Road here at about 7.15 am, where they underwent weight checking. Sri Sairam and Co. has been checking the weights of Dasara elephants since 25 years. 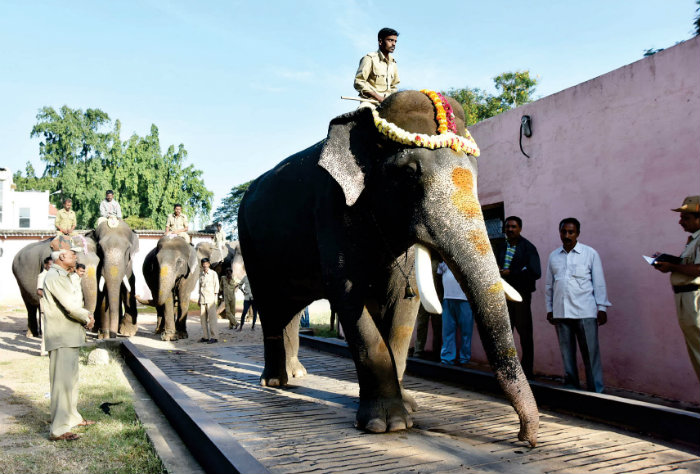 The weight of an elephant is said to be very important to decide on the quality and quantity of its diet, ensuring that they gain enough strength to undergo the arduous journey of 10 kms on the Jumboo Savari day, that too after waiting for hours before the procession begins.

Out of the first batch of six Dasara elephants, Dhananjaya is making his first appearance while Chaitra is participating after a gap of two years due to pregnancy and delivery. Vikrama and Gopi, though have participated in Dasara earlier, this is for the first time they have come in the first batch.

Meanwhile, Veterinarian Dr. D.N. Nagaraju said that the six Dasara elephants which arrived in the first batch to Mysuru underwent weight checking this morning and added that the training to familiarise them on the Jumboo Savari route will begin from tomorrow morning. He further said that all the elephants were hale and healthy to undergo training besides stating that the elephants have been put on a special diet since yesterday.

Elephants in-charge Rangaraju, DRFO Kumar, Mahouts and Kavadis of all the six elephants accompanied them for weight checking.