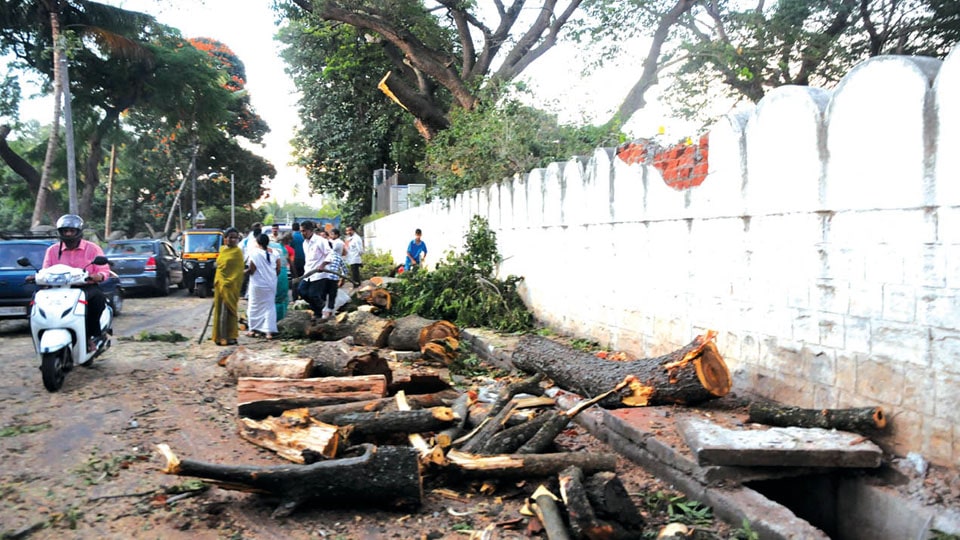 Mysuru: A person, who was awarded the tender by the Forest Department to cut dangerous branches, has allegedly axed huge trees which has angered environmentalists.

Huge trees were felled near Sri Vani Vilas Ursu First Grade College and the environmentalists who rushed to the spot have opposed such an act by the Forest Department.

Meanwhile, environmentalist Banu Mohan said that the Forest Department had given permission to cut down five branches of the trees which were posing danger and accused that the person, who was awarded the tender, had chopped down huge trees itself and was transporting the logs in trucks. She further said that the process of chopping trees began about 20 days back and since then, trees were axed and logs were being transported in trucks. On Tuesday too, a huge tree was being axed and when questioned, the person showed the permission letter, which states that only small and dangerous branches must be chopped, she said and added that the person had obtained tender for Rs.2,500 for chopping branches. But he has felled huge trees itself worth lakhs of rupees, she alleged.

She said that when the Forest Department officials were told about this, they said that they do not have staff so they had given the tender and even MCC officials said that they cannot cut branches which are very high. If this continues, there would be no trees in city which would take toll of the environment.