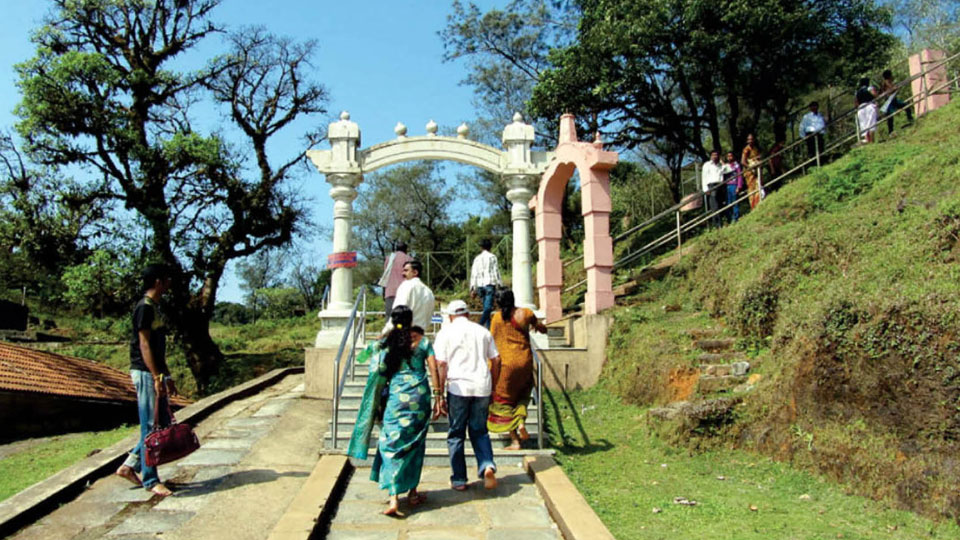 Proposal to ban entry of women to Brahmagiri Hills

Mysuru:  The Karnataka State Human Rights Commission (KSHRC) has issued a notice to Talacauvery Temple Committee in Kodagu district over the issue of a proposal to ban  entry of women to Brahmagiri Hills at Talacauvery, the birthplace of River Cauvery. The Committee was mulling to impose a ban following the directions it had got from the Ashtamangala Prashne (octagonal questioning ceremony) that was held at Talacauvery recently.

The notice (HRC No.1946/10/23/2018), a copy of which is with Star of Mysore has been issued to B.S. Thammaiah, President of Talacauvery Temple Committee and the Deputy Commissioner of Kodagu District. The next hearing of the issue has been fixed on June 25.

The Ashtamangala Prashne was recently held at the birthplace of River Cauvery and the rituals were guided by Neeleshwara Padmanabha Tantri and conducted by astrologer from Kerala A.V. Narayana Poduval and M. Shyam Sundar Shastri.

During the rituals, Neeleshwara Padmanabha Tantri had said, “Only men, girls below 10 years and women above 50 years must be allowed to climb the Brahmagiri Hill from the start of ‘Tula Sankramana’ (October 17) to ‘Vrushabha Sankramana’ (May 15).” He had stated that “Women, dressed in shorts and inappropriate clothes, are ruining the sanctity of the place.”

He opined that the pilgrim centre has been turned into a tourist destination, which has weakened the spiritual character of the place. He feared that this will result in the disappearance of source of River Cauvery. “The tourists are visiting the pilgrim centre without any devotion to the Goddess. Women are polluting the source of the river, which has decreased the divinity of the place,” he had said.

Following the publication of the Ashtamangala ritual findings in media, the Human Rights Commission, headquartered in Bengaluru, took suo-moto cognisance of the issue and the notice was sent to the Temple Committee as some media reports said that the Committee was planning to ban women of certain age from climbing the Brahmagiri Hill.

Justice D.H. Waghela of the Commission, in his observation at the Commission’s meeting held on May 28, said the proposal to ban women from climbing Brahmagiri Hill will amount to discrimination against women. The Commission opined that men and women are entitled to have equal rights at a place of worship.

Thammaiah has stated that the rituals of Ashtamangala Prashne were yet to conclude and the astrologers are yet to suggest measures to be taken after the rituals. The Committee will place the proposals or findings of the rituals before Kodagu District administration and only then a decision regarding any changes will take place at Talacauvery, he added.

The Committee President has clarified that at no point of time they have discriminated against women and has urged the Commission to close the suo-moto proceedings against the Committee.