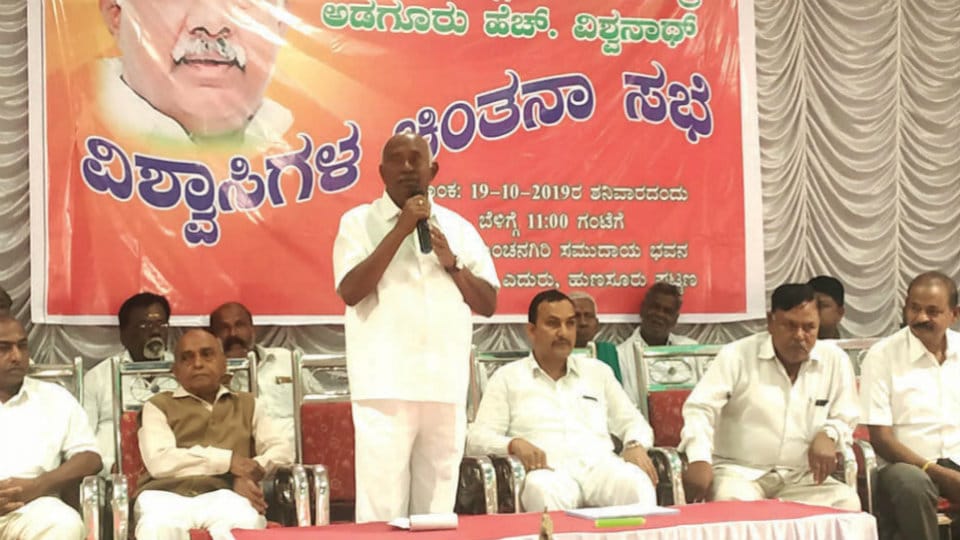 Humiliation and disappointment forced him to quit, claims A.H. Vishwanath

Hunsur: Disqualified Hunsur MLA A.H. Vishwanath has claimed that humiliation and disappointment during the Congress – JD(S) coalition regime had forced him to quit his Assembly seat.

Addressing a meeting of his supporters at Adichunchanagiri Community Hall here yesterday, Vishwanath  said that anyone present in the meeting can ask questions on why he quit, when JD(S) workers took strong exception to his resignation. Vishwanath defended his resignation, saying that  a choking atmosphere in the coalition government pushed him to quit the Assembly.

Even as Vishwanath was explaining his stand, his supporters and JD(S) workers almost came to blows, when other workers and the Police intervened and calmed down the situation.

Replying to a dalit leader’s question on why he was inclined to join the BJP, Vishwanath replied that the personal standing of a leader was more important than the party he belonged to,

Explaining the reasons behind his quitting, Vishwanath claimed that his name was initially in the list of Ministers who were to be sworn-in when the Coalition Government was formed. But his name was dropped from the list minutes before the swearing-in ceremony, which hurt him a lot, when the JD(S) leaders promised him of Cabinet berth in a month, which was never kept, he said.

Asserting that he never had the freedom to build the JD(S),when he was the State President of the party,the senior leader defended his decision to quit saying that he was fed up with family politics in the party.