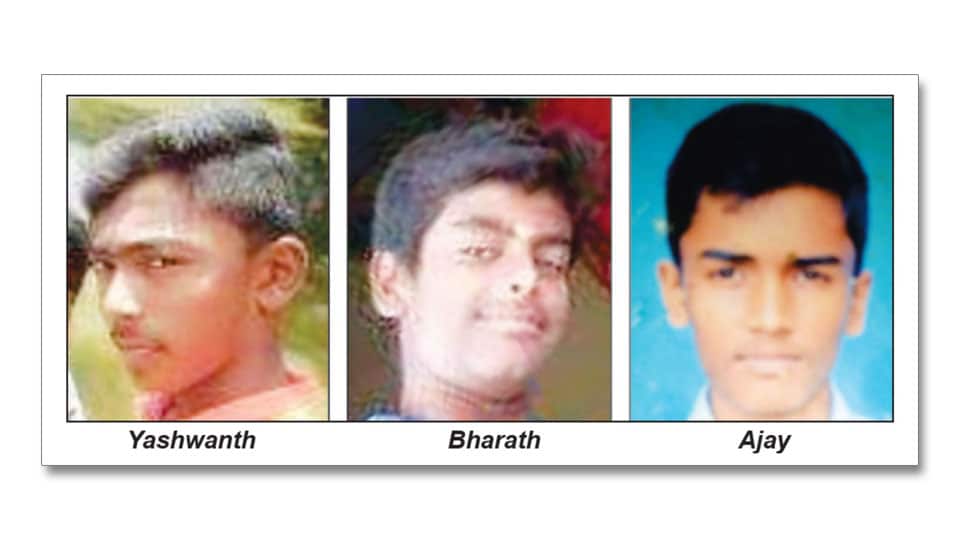 Hunsur: In a heart-rending incident, four students, who went for a swim in a lake at Hairige village in Hunsur, met their watery grave in the lake last evening.

The deceased have been identified as Yashwanth, son of Mesthry Krishna of V.P. Bore in Hunsur town, Bharath, son of Raju, Ajay, son of Ramesh of Hegandur and Dhnanjay, son of Shivanna of Hale Chikkahunasur. All the four were studying in 10th standard at St. Joseph’s High School in Hunsur.

The deceased students, who attended the SSLC preparatory exam at the school, left for a swim later. While three of them left triple riding on Yeshwanth’s bike another student left in a bus and joined the three at the lake in Hairige village near here.

The four students after keeping their clothes, mobile phones and watches on the bike which was parked on the lake bund, ventured into the lake for a swim at about 4 pm and were drowned.

Meanwhile, one Zabiulla, who was working at a field nearby, heard the students screaming and rushed towards the lake only to see the four students drowning and immediately raised an alarm alerting others nearby. By the time other people arrived, the four were already drowned.

Zabiulla then informed Hunsur Rural SI Puttaswamy over the phone, who in turn informed Fire and Emergency Services personnel, who rushed to the spot along with expert swimmers and divers, conducted a search for the bodies and managed to fish out the bodies of Bharath and Dhananjay. As it got dark, the search operation was suspended.

Meanwhile, the Fire and Emergency Services personnel, along with expert swimmers and the Police, began the search operation to fish out the remaining two bodies this morning. The search operation was on when we went to the Press.