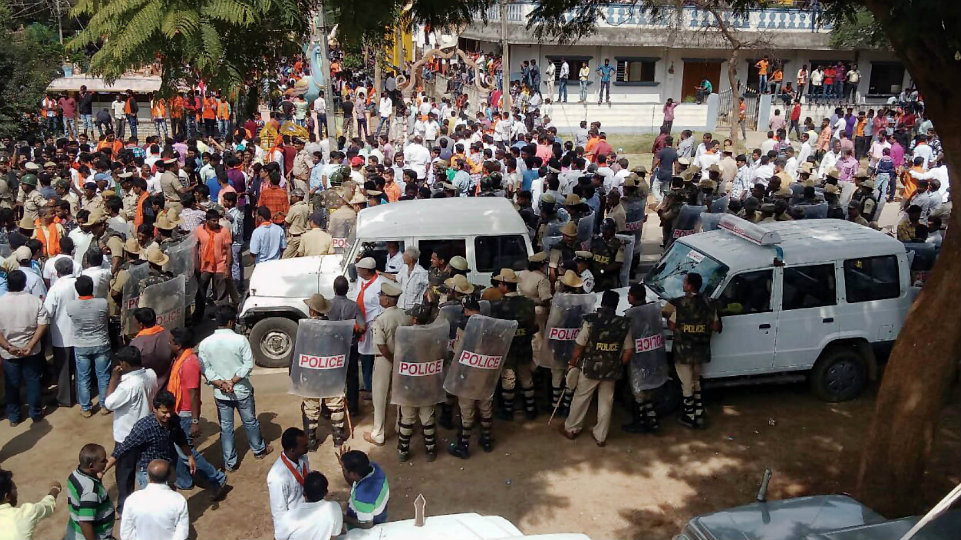 Hunsur: Tension prevailed in Hunsur this morning as hundreds of Hindu activists and BJP leaders were taken into preventive custody by the Police to prevent any untoward incident in view of the proposed procession to be taken out today on the occasion of  Hanuma Jayanti.

Police resorted to lathi charge at many places and MP Pratap Simha was also taken into preventive custody.

Reports said that the MP’s vehicle tried to drive over the barricade put up by the Police. The vehicle was, however, prevented from proceeding further as Mysuru SP Ravi  D. Channannavar took the MP into preventive custody.

The Police and the District Administration had set up a tight security ring around the communally-sensitive Hunsur town ahead of Eid Meelad and Hanuma Jayanti celebrations.

Barring the procession routes, Section 144 has been imposed in the town. Traffic diversion has been put in place and sale of liquor has been restricted.

The town literally turned into a fortress this morning with  more than 2,000 Police personnel posted there along with senior officers.

As a precautionary measure, the Police clamped Section 144 throughout the town.

Only the road from Muneshwara Kaval grounds to Manjunatheshwara Temple was excluded from the prohibitory orders to take out the Hanuma Jayanti procession. However, BJP leaders were keen to take out the procession through the main thoroughfares of town which had been turned down by the Police.

Speaking to reporters before being taken to Police custody, Pratap Simha claimed that the Police Department was not cooperating in holding a religious festival and added that it was deliberately creating tension. He alleged that the Hanuma Jayanti organisers were not properly briefed by the Police in advance.

Meanwhile, former MP A.H. Vishwanath and others were patiently waiting at the Manjunatheshwara Temple for the festivities to begin along with thousands of people who were urging for the presence of Pratap Simha to launch the procession. Union Minister Anant Kumar Hegde is supposed to arrive in Hunsur later in the afternoon to take part in the celebrations.

Police had to resort to a lathi charge to disperse the swelling crowd near the temple. The Police have been issuing warning against miscreants trying to create tension at the town either through inflammatory speeches, inciting remarks or by any action.

Over 2,500 Police personnel, including an SP, an Additional SP, 7 DSP/ASPs, 20 Inspectors, 60 Sub-Inspectors, 250 ASIs, 1,200 Head Constables and Constables, 250 Home Guards, 6 KSRP platoons, 20 DAR platoons, and 2 Rapid/Quick Response teams have been posted. 14 Check-posts and 50 picketing points have been put in place to prevent any untoward incidents. The stalemate and tension had continued when we went to the Press.