Home » Elections 2018 » I will not die for power, I will die for my people: Yeddyurappa 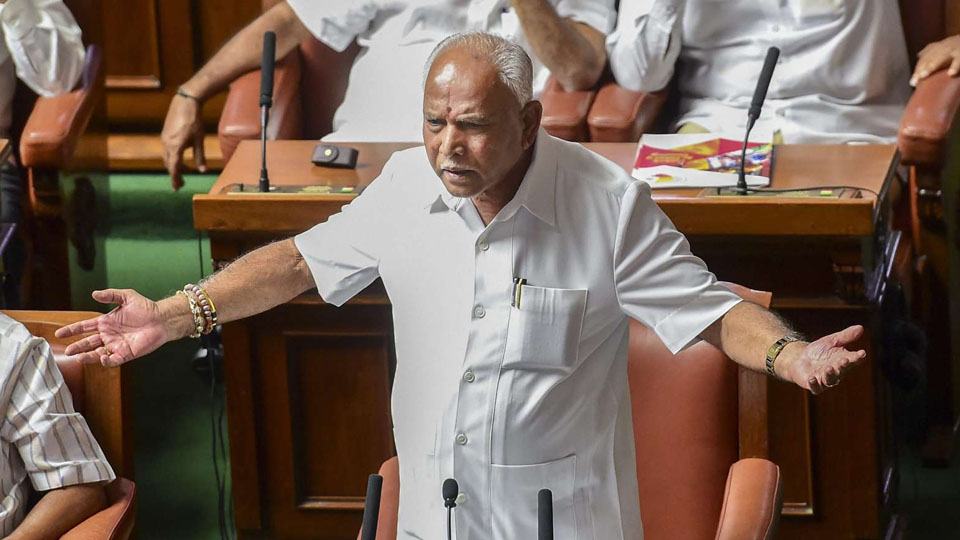 I will not die for power, I will die for my people: Yeddyurappa

Bengaluru:  Taking a potshot at Congress-JD(S) CM candidate, H.D. Kumaraswamy, without naming him, Yeddyurappa yesterday recalled that some leaders had said during the campaign that they would die if they were not elected to power. “But I will not die for power, I will die for my people, because they are the masters in a democracy. I will tour the State and we will win 150 seats in the next Assembly elections, which may happen anytime. I will put in my papers due to a conspiracy of the Congress Party,” he said before leaving the Assembly, shaking the hands of the Opposition and his own party’s leaders.

Before leaving for Raj Bhavan to hand in his resignation at the end of what was one of the shortest tenures of any government, Yeddyurappa announced in the House that he would not rest until the BJP won 28 Lok Sabha seats in the 2019 general election and 150 seats in the next Assembly polls, which he predicted could happen anytime.

Yeddyurappa, recalling his political struggle since the days when the BJP had merely two MLAs in the House, reiterated that he would work for the people and his party till his last breath. “Ever since the party named me its Chief Ministerial candidate, I toured the State and connected with the people through the ‘Parivartana Yatra.’ And they gave us 104 seats, while rejecting the Congress and JD(S). But both parties have come together to form an unholy alliance,” he said, and added: “If I were to continue in the Chief Minister’s post, it would be a different scene altogether for the State with development work being carried out on a war-footing through greater financial assistance from the Narendra  Modi Government at the Centre, making Karnataka a model State of the country.”

2 COMMENTS ON THIS POST To “I will not die for power, I will die for my people: Yeddyurappa”