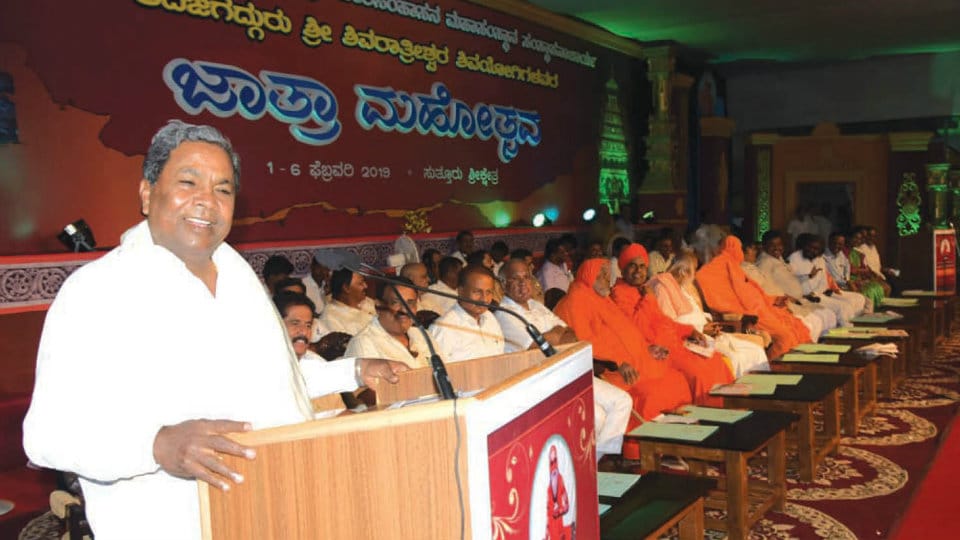 Suttur: Former Chief Minister Siddharamaiah on Saturday disclosed that he would not have become a lawyer had he paid heed to the words of village Shyanbhog.

Speaking after inaugurating the State-level Bhajana Mela at Suttur Jathra Mahotsava at Suttur in Nanjangud taluk  yesterday, Siddharamaiah said that the village Shyanbhog had scared his (Siddu) father on studying law.

Maintaining that his father used to respect the words of village Shyanbhog, Siddharamaiah said that the Shyanbhog had advised his (Siddu) father of making his son (Siddu) an advocate saying that the profession was only suited for Brahmins.

“But I insisted on studying law and even demanded a partake in family property for studying law,” Siddharamaiah said while maintaining that he could become the Chief Minister only because he practiced law and later joined politics. Ridiculing ‘Karma’ theory, the former CM said that he does not believe in ‘Karma’ and the people too should not believe such things.

Recalling his defeat in Chamundeshwari Constituency, Siddharamaiah regretted that he had to taste defeat despite his best efforts to serve the people. Noting that we would have won if he had contested from Varuna, Siddharamaiah got emotional and thanked the people of Varuna for electing his son Dr. Yathindra.

Former CM Siddharamaiah, who was said to have maintained a distance with his close-aide Dr. H.C. Mahadevappa, who was PWD Minister in his (Siddu) Cabinet, in the run up to last year’s Assembly polls, shared the stage with the former Minister at the event thus giving rise to speculations that the two have patched up after a brief hiatus.

Dr. Mahadevappa, praising Siddharamaiah’s leadership, said that he cannot still believe that Siddharamaiah was not the CM now.