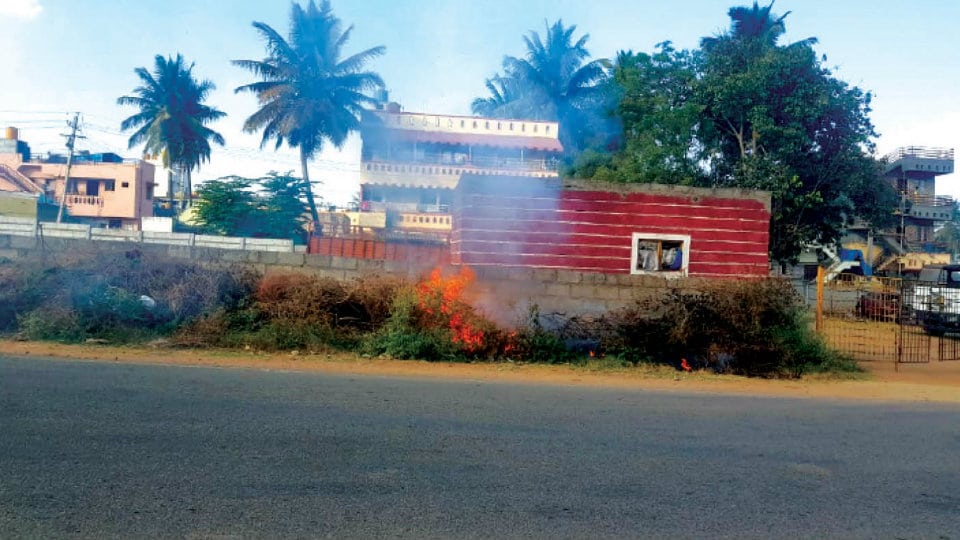 Such acts kill birds, reptiles and cause problems to humans

Mysuru:  With summer fast approaching and grass and plants drying up, there is a rise in incidents where miscreants are setting fire to dry grass and plants at vacant places in city which are not only killing birds and reptiles, which have taken shelter there, but also causing a lot of inconvenience to human beings because of thick smoke emanating from the fire.

People, especially young boys are seen lighting fire to grass and plants at vacant places in Manasagangothri, Raghavendra Nagar near Gururaja Layout adjacent to a park, resulting in thick smoke engulfing the houses in the area. This apart, small birds which have built nests and many reptiles and insects which have taken shelter in these places are being killed and there are fears of the fire spreading to nearby houses.

There are incidents of miscreants setting fire to dry grass in vacant places near Sewage Farm and other places close to Chamundi Hill. This may result in wind carrying sparks to the Hill region causing fire there, thus destroying flora and fauna.

The public have urged the authorities concerned to take this issue seriously and issue warning to miscreants against indulging in such destructive acts.

Meanwhile, city’s well-known snake rescuer and environmentalist, Snake Shyam, urging the miscreants against indulging in such acts because insects and reptiles in a bid to escape from the fire may take shelter at nearby houses and the thick smoke emanating from the fire may cause health problems especially to children and senior citizens.

Mysuru City Corporation
‘I would not have become a Lawyer had I paid heed to the words of village Shyanbhog’
Over 1,400 yoga enthusiasts take part in Mass Suryanamaskara in Mysuru