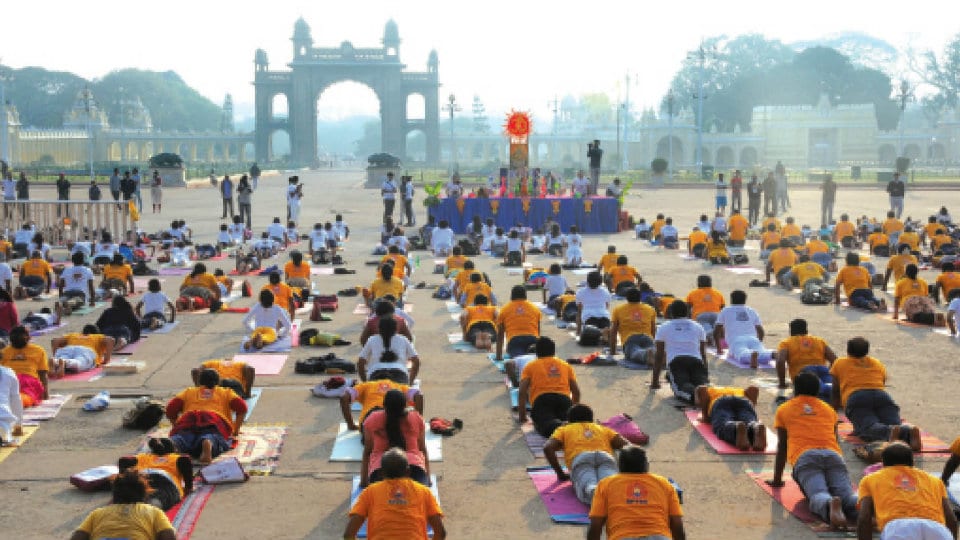 Over 1,400 yoga enthusiasts take part in Mass Suryanamaskara in Mysuru

Over 1,400 yoga enthusiasts from across the city participated. Mayor Pushpalatha Jagannath was also at the event performing 108 Suryanamaskara on stage, motivating the participants. The programme that began at 6 am, concluded at 8 am. Organisers distributed jaggery, sugar candies at the 30th, 54th and 78th rounds to keep them energised.

Participants chanted Surya Mantra for every Suryanamaskara. They ended the demonstration by performing ‘Shavasana.’ Certificates were distributed for all the participants.

Highlighting the measures taken by PM Narendra Modi for the spread of yoga across the globe, Ramdas asked the yoga instructors to make all preparations to invite Modi to city for the Mass Yoga Demonstration organised as part of International Day of Yoga on June 21.

MLA Ramdas also urged the Union Government to introduce yoga compulsorily in CBSE, ICSE and other Central Government monitored schools to popularise yoga as there are a lot of benefits to school students to improve their memory, concentration and overall health.

“All State Government-run schools will follow suit if the Centre introduces yoga in School curriculum,” he said.

Vijayanagar Yoganarasimhaswamy Temple Chief Prof. Bhashyam Swamiji recalled that the erstwhile Maharajas of Mysuru were practising yogasanas and  Suryanamaskara at Sanskrit Pathashala on Sayyaji Rao Road in those days and added that many students are still continuing this tradition in the Pathashala premises every day.

He said that there is a lot of health benefits from worshipping Sun God and practising Surynamaskara everyday morning as it helps in keeping good health and being active all day.