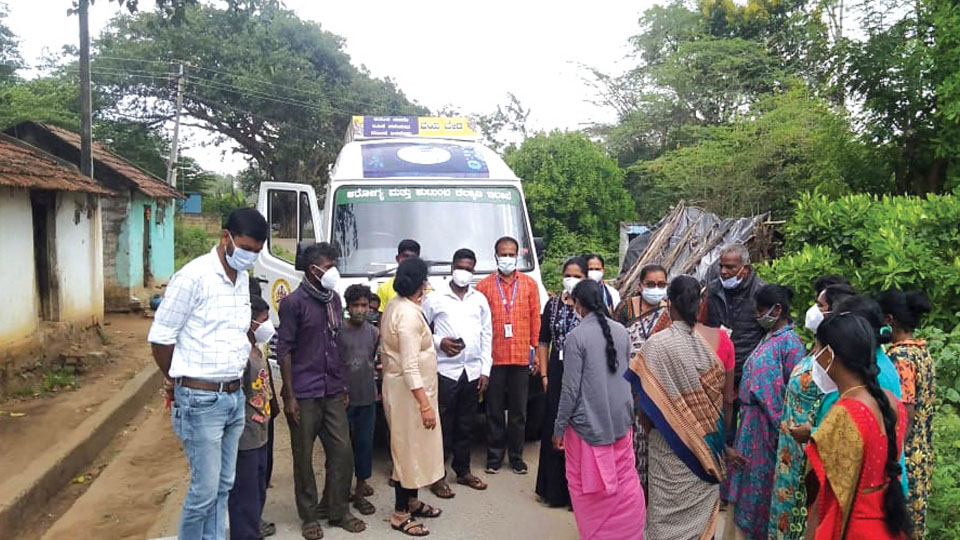 Mysore/Mysuru: Despite reports that tribals and a significant rural population are displaying vaccine hesitancy and opposing COVID tests, the IEC (Information, Education, Communication) team of the Health and Family Welfare Department has succeeded in convincing them to get jabs for their own health, safety and well-being.

Most of the tribal and rural population were scary of tests and subsequent hospitalisation and also had misconception about vaccine. But the IEC team which visited several villages and tribal hamlets in the district, succeeded in convincing the tribals and villagers for getting tested and vaccinated.

Earlier, the tribals and villagers had rejected all assurances by ASHA workers and other Health workers on the necessity of getting tested and vaccinated.

Following reports and complaints by the Health authorities on vaccine hesitancy among tribals in some hamlets of Hunsur, Periyapatna, Nanjangud and H.D. Kote taluks, the District Health Education Officer M. Muneendramma formed the IEC team and asked it to visit all villages and tribal hamlets which displayed vaccine hesitancy.

Accordingly, the team, with Padmavathi as the Convenor, visited such villages, including Naganahalli, Hanchya, Rammanahalli, Doora, Udbur and M.C. Hundi in Mysuru taluk, Hura, Kasuvinahalli and Hediyala in Nanjangud taluk, Talakad and Mahadevapura in T. Narasipur taluk as well as several tribal hamlets in Hunsur, Periyapatna, Nanjangud and H.D. Kote taluks and succeeded in convincing the residents to get tested and vaccinated. After being convinced, the tribals and villagers are now coming forward to undergo COVID tests and receive jabs.

Muneendramma told Star of Mysore that villagers and tribals had developed hesitancy due to misconception about COVID tests and vaccine.

READ ALSO  One person tests positive for COVID-19 in Mysuru

Upon learning about the reluctance of villagers, the IEC team visited villages and tribal hamlets and spoke to village heads on the necessity of undergoing tests and receiving jabs, she pointed out.

Maintaining that convincing the villagers was a big challenge in the beginning, she said that the IEC team has succeeded in its job after much explanation and sensitisation. The team will continue its work of visiting villages and educating people on health check-ups, she added.