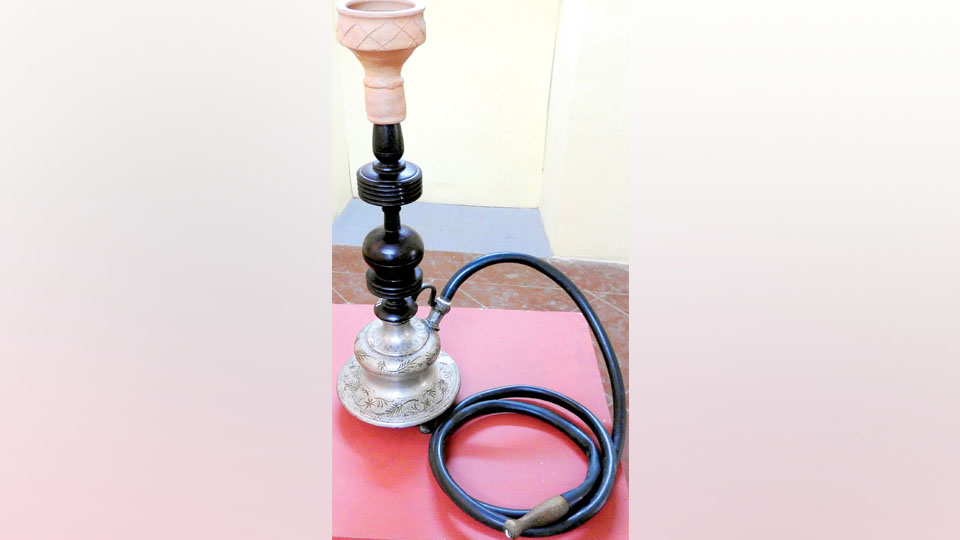 Under the popular museum series ‘Exhibit of the Month’ of Indira Gandhi Rashtriya Manav Sangrahalaya (IGRMS), Southern Regional Centre (SRC), Mysuru, Farshi, the Bronze Hookah belonging to the Rajput community of Uttarakhand is kept on display at Wellington House on Irwin  Road in city.

The object was inaugurated by IGRMS Officer In-Charge J. Vijay Mohan on Aug.7. The exhibit will be on show throughout the month of August-2018.

The concept of Hookah is thought to have originated in India. Once the province of the wealthy, it was tremendously popular especially during Mughal rule. The use of Hookahs from ancient times in India was not only a custom, but a matter of prestige. Rich and landed classes would smoke Hookahs.

Tobacco is smoked in Hookahs in many villages as per traditional customs. The word Hookah is a derivative of “Huqqa”, a Hindustani term. Instead of copper, brass and low quality alloys, manufacturers increasingly use stainless steel and aluminium. Silicone rubber compounds are used for Hookah hoses instead of leather and wire.

The object FARSI (Bronze-made Hookah) was collected from Almora district of Uttarakhand. This item was used by the folk community (Rajput). It is approximately about 75 years old. The object was collected by IGRMS, Bhopal officials from Bhagavan Singh of Almora. Bronze, wood and terracotta materials were used for the preparation of Hookah.