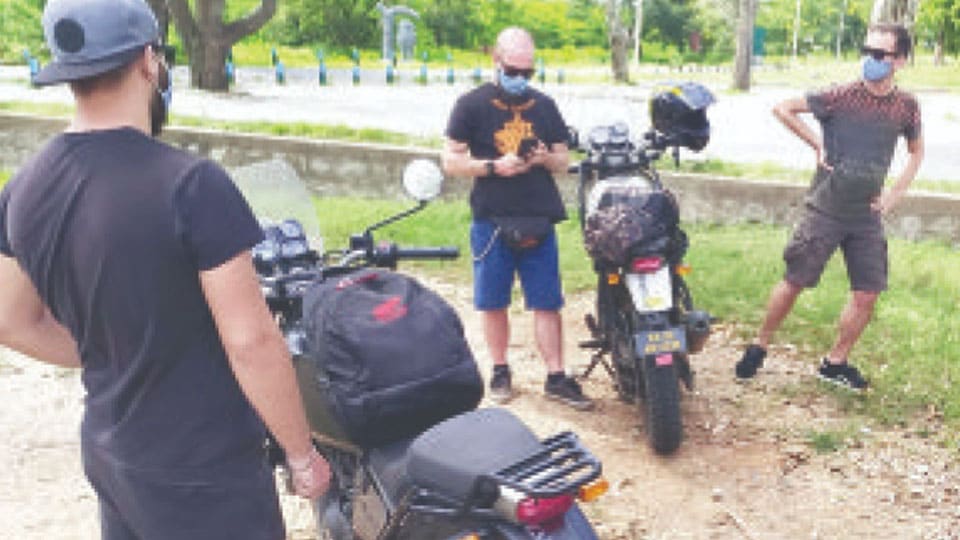 Forest officials, Police take them and bikes into custody

Gundlupet: Three foreign nationals, who had entered Bandipur Tiger Reserve Forest illegally on bikes on Sunday and allegedly created nuisance with the Forest staff, have been taken into custody along with their bikes.

The three foreign nationals are Ricardo, Miguel Garrido, and Thomas Pinho, all from Portugal. It is learnt that the three are DRDO Special Engineers, who had flown to DRDO in Bengaluru for aircraft maintenance. Despite not having permission to move around, the trio on two rented bikes – KA-03-AH-4238 and KA-03-AJ-0648 — came to Bandipur from Bengaluru and had entered the forest area illegally.

When the Forest staff stopped and questioned them, they are said to have not given proper information and created nuisance with the forest staff. Assistant Conservator of Forests (ACF) Paramesh, Bandipur Project Tiger Director T. Balachandra and the Gundlupet Police,                              who rushed to the spot, took custody of the foreign nationals and their bikes.

Balachandra, speaking to ‘Star of Mysore’ said that the three Portugal nationals, had entered the forest area illegally and added that as they are foreign nationals, action cannot be taken under the Forest Department Act, hence they were interrogated under the Wildlife Protection Act.

Continuing, Balachandra said that the DRDO has written a letter asking the Forest Department to let them go after issuing warning and added that the Portugal Ambassador in Bengaluru, would be arriving at Bandipur on June 9 and an enquiry will be conducted.

Balachandra further said that to keep healthy relationship with Portugal, the trio would be fined and warnings would be given before letting them go. He further said that the bikes would not be released, but a case would be registered against the bike rental agency and investigation would be conducted.

Meanwhile, it is learnt that a DRDO official was on his way from Bengaluru and would reach Bandipur in the afternoon.