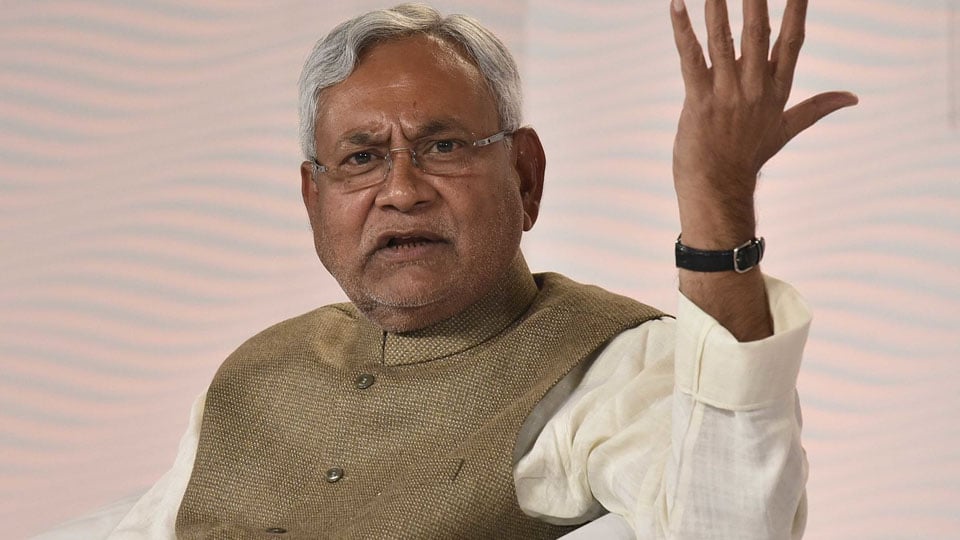 The ‘Mahaghatbandhan’ in Bihar has collapsed. In a stunning development that has taken everyone by surprise, Bihar Chief Minister Nitish Kumar submitted his resignation to Governor Keshri Nath Tripathi last night. However, by way quirk of fate, today he is back as the Chief Minister by other means. He was sworn-in for the sixth time by the Governor at 10 am along with BJP’s Sushil Kumar Modi as Deputy Chief Minister in a new alliance.

An unholy, opportunistic and a sinful alliance will not last long. Such alliances, ultimately, are bound to break up. If good individuals, those who live by moral values and have chosen politics with the sole intention of serving people, become Chief Ministers due to such sinful alliance, such Chief Ministers will not survive for a full term in office. This is one such example.  Ultimately, they have to give up the position as “atonement” for their sins. Nitish Kumar has done just that.

Many years ago I had an opportunity to meet Nitish Kumar in person at Rajendra Kalamandira in Mysuru. The occasion was the National Convention of Janata Dal (United) for which many tall leaders of the party, including George Fernandes and Sharad Yadav, had come. Many people had told me and I have personally experienced that Nitish Kumar was an amiable honest politician.

I had visited Patna, the capital of Bihar, during the initial days of Nitish Kumar’s Chief Ministership. I still remember what my taxi driver had told me. “When Lalu Prasad was the Chief Minister (later his wife Rabri Devi) nobody would dare walk or drive on the streets after dark. Criminals had a free run and they robbed people. Vehicles were waylaid and looted.”

I could understand what the taxi driver said as I had read about the “Jungle Raj” of Bihar in the newspapers. I was aware of the utter lawlessness in Bihar during Lalu’s regime. Bihar began to thrive and progress after Nitish Kumar took over as the Chief Minister, ending the Lalu’s Evil Empire. He brought in new laws and amended old laws to ensure social order and to check corruption. One such law, I remember, is the law that enabled courts to deny bail to a corrupt officer who has been arrested. Secondly, the law enabled government to attach the ill-gotten properties like houses and buildings of corrupt officers and converted them into schools, orphanages, hospitals and libraries or for any other public convenience facility.

As soon as this stringent law was enforced, over 50 percent of the corrupt practices, that flourished during the previous Lalu Yadav’s regime, came to an end and Nitish Kumar’s administration was able to bring many corrupt officers to book. As corruption came under control, his government could ensure that basic facilities are provided to the people. Gradually, the State began to move towards the path of development.

By the way many years before B.S. Yeddyurappa, as BJP Chief Minister, introduced gifting of bicycles to girl students as an incentive to make them go to school, Nitish Kumar in Bihar had already introduced the cycle scheme successfully. Similarly, Nitish Kumar had also introduced the mid-day meal scheme.

Unfortunately, in 2015, through the “Mahaghatbandhan”, Nitish Kumar joined hands with the Lalu whose corrupt government he had earlier overthrown.

In his column, India’s senior journalist T.J.S. George wrote about Lalu as follows: “…No Indian politician has so openly misused power. Nor has any other leader pushed the family into power with the same ‘I-am-the-proprietor’ attitude. Lalu has been a synonym for corruption in unique ways — the only leader who breaks laws with defiance and daring.” Star of Mysore had published George’s column on Tuesday, 25th July, 2017.

Continuing on Lalu, George says, “…Left to himself, Lalu Prasad would think it perfectly natural for Rabri Devi to become President of the country, Misa to become Prime Minister, Tejashwi the Home Minister with additional charge of Industries, Finance and Information, Tej Pratap the Chief Minister of Bihar, and daughters Rohini, Ragini, Chanda, Hema, Rajalakshmi and Dhannu to be named Ambassadors to the world’s big powers. He would want nothing for himself except his formal portrait to hang in all government offices as the most loving husband and father in Indian history.”

Looking back at the unholy “Mahaghatbandhan”, it is surprising how Nitish Kumar, an honest politician who has always stood by values, could join hands with the most corrupt Lalu Prasad Yadav that too when the multi-crore Fodder Scam (where Lalu is the prime accused) is still in the Courts.

One more point to ponder is that anyone in Nitish Kumar’s Catch 22 situation, would have either dropped corruption-tainted Deputy Chief Minister Tejashwi Yadav from his Cabinet or would have recommended the dissolution of the Assembly to the Governor. But by resigning, Nitish Kumar has stood his moral ground and sacrificed his office in the interest of the State and country. This move by Nitish Kumar is worthy of emulation by every patriotic, honest politician.

The BJP’s move to offer unconditional support to Nitish Kumar, who has severed ties with a corrupt person and his party RJD, is commendable. This will strengthen the hands of Nitish Kumar in his war against corruption and efforts to focus on development of Bihar.