Home » Feature Articles » Interview with B. Saroja Devi, the Queen of Tamil Cinema – 1 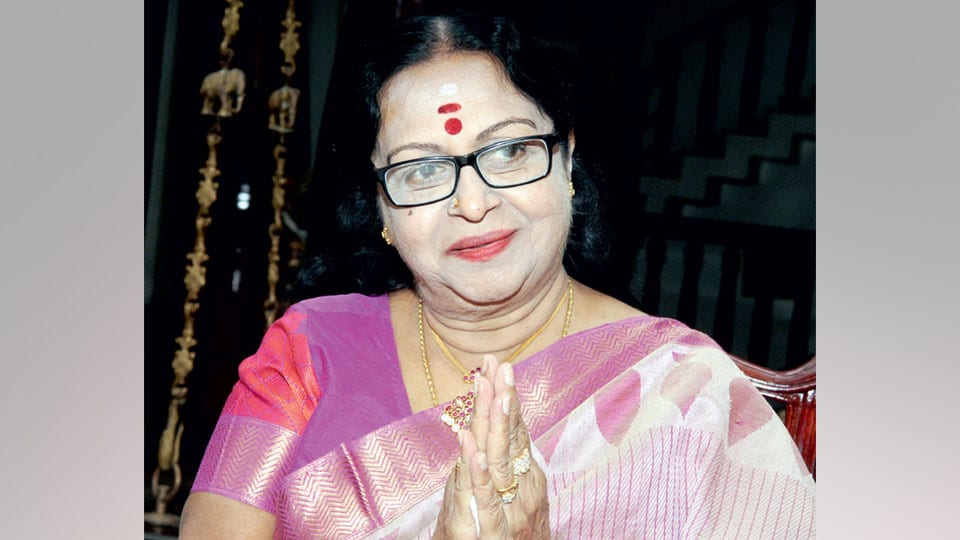 Interview with B. Saroja Devi, the Queen of Tamil Cinema – 1

There are actors and there are stars in the cinema world. But a combination of both is very rare like the legendary stars M.G. Ramachandran, N.T. Rama Rao and Dr. Rajkumar in the South Indian film industry. To this league belongs a female star, who has straddled the cinema world of four languages — Bollywood (Hindi), Tollywood (Telugu), Kollywood (Tamil) and Sandalwood (Kannada). She is the legendary actress Padma Bhushan Dr. B. Saroja Devi, who was on a private visit to the city recently.

Star of Mysore Features Editor N. Niranjan Nikam met the suave, attractive looking star of yesteryears, who has lost none of her charm and remarkable memory, at the very plush Yadavagiri residence of former HMT Chairman and now Chairman of Bharatiya Vidya Bhavan (BVB), Bengaluru, N. Ramanuja for an hour-long interaction.

Known as ‘Abhinaya Saraswathi,’ Saroja Devi spoke about her early career in the film industry, the times she spent with the legendary heroes, how cinema was her world, the ups and downs in her life, her views on dubbing, reverence for the Maharajas of Mysore and her philosophy of life. — Editor

Star of Mysore (SOM): It is fascinating to read your career graph in the film industry. You have been rated as the most successful female lead in the history of Indian cinema and it is not an exaggeration because you have acted in all the four languages — Tamil, Hindi, Kannada and Telugu and known as ‘ChaturbhashaTaare.’ How does your achievement look now after all these years?

Saroja Devi: I do not feel anything. I believe this is destiny (vidhi). Why is it that you have not come to interview me all these years in Mysuru? Why is it that the photographer is taking my pictures now? It could have happened earlier too. Today the time has come. Without God’s intervention not even a stick moves. But it is not correct to believe only in destiny and keep idle.

READ ALSO  Pt. Rajeev Taranath: A Sarod Maestro and a Legend in our times-1

There were many people like Saroja Devi in Bengaluru those days. But why did I come to cinema? A lot of hard work is involved when you are bestowed with title “Gaurava Nati” (respected actor).

Acting is not just wearing some glamorous sarees and a few other costumes. It is playing the character to perfection. God was kind enough to give me very good roles, very good directors, producers and I was paired with some of the greatest heroes of the times. Do you think I achieved all this alone? It is only due to the combination of all these factors that today I am rated one of the best actors. Only when two hands join can there be a clap. I start wondering ‘how did I land up with all these characters?’ Many of my songs became super hits. I also had the grit (chala) that I should speak in Tamil or Telugu in front of the heroes. I firmly believed that there should be no dubbing. There is a lot of difference in speaking in my own voice than somebody else dubbing for me. When I speak, the emotions come from the pit of my stomach.

Take for instance the movie Kittur Chennamma. There is a dialogue “Nimagyake kodabeku kappa?” [Why should I pay you tribute?] (Emotes the voice). There is a lot of difference in my delivering those dialogues than when somebody else does. Oh imagine acting opposite giants like N.T. Rama Rao in Telugu or Sivaji Ganesan in Tamil and speak like them in their languages. When it comes to Kannada cinema Rajkumar is the ultimate. How good was his Kannada! And to act in movies like Bhagyavantharu and Babruvahana opposite him is very difficult. It is all due to the grace of God. The only feeling I had all along was that I should work hard and not be belittled (chi anskobardu). 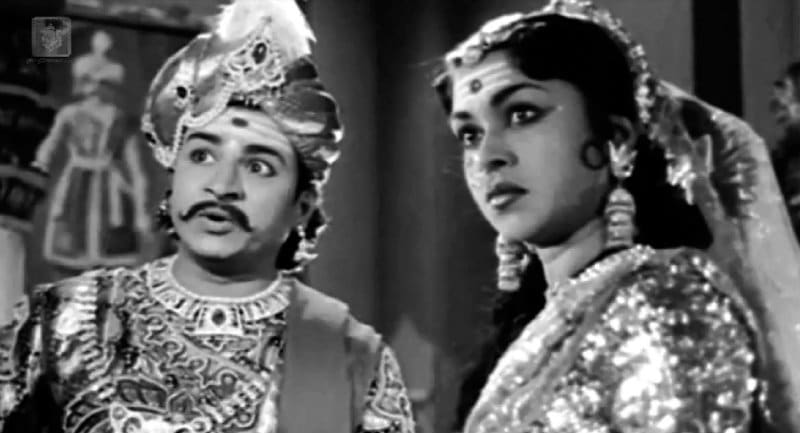 A scene from the Kannada movie ‘Kittur Chennamma.’

SOM: You were born in Bengaluru to a Gowda family and Kannada must have been your mother tongue. But how did you acquire mastery over other languages?

READ ALSO  Pt. Rajeev Taranath: A Sarod Maestro and a Legend in our times-2

Saroja Devi: As I told you just now, when I was acting before Sivaji Ganesan, he would lift his eyes like this and look at me (shows it). They all had hold over the language. Every- body should have chala (grit) and I had it in plenty. In the movie Sri Krishna Rukmini Satyabhama in Kannada where I was paired opposite Rajkumar or Krishnarjuna in Telugu where on one side was NTR and Nageswara Rao and here I was in the middle as Subhadra; in Seetha Vanavasa NTR was Rama and I was Seetha Devi and in Seetha Rama Kalyana NTR was Ravana and I was Mandodari. And when you act in such movies the dialogues are not short. They are lengthy ones and I had to learn all of them.

SOM: What about Hindi films?

Saroja Devi: When it came to Hindi, I had it in school as a second language and knew a bit. But I learnt Hindi watching other movies stars. Most of my Hindi films ran for 40 weeks and 25 weeks.

If I had continued in the Hindi film industry may be I would have reached greater heights. But their working style was different. They would come late to the sets. For instance I was cast opposite Raj Kapoor in Nazrana. But I could not complete the film due to some problems. He came at 8 in the night and worked till early in the morning, he just did not bother. In South it was different. I had to finish working in one film and then run to another one. My schedule was 7 am to 1 pm, 2 pm to 9 pm and 10 pm to 2 am. At that hour in the night they would drop us home in the car. I would be totally exhausted.

SOM: You worked in three shifts?

Saroja Devi: Yes, that is because there were so many films I was doing and I had to give dates to all of them.