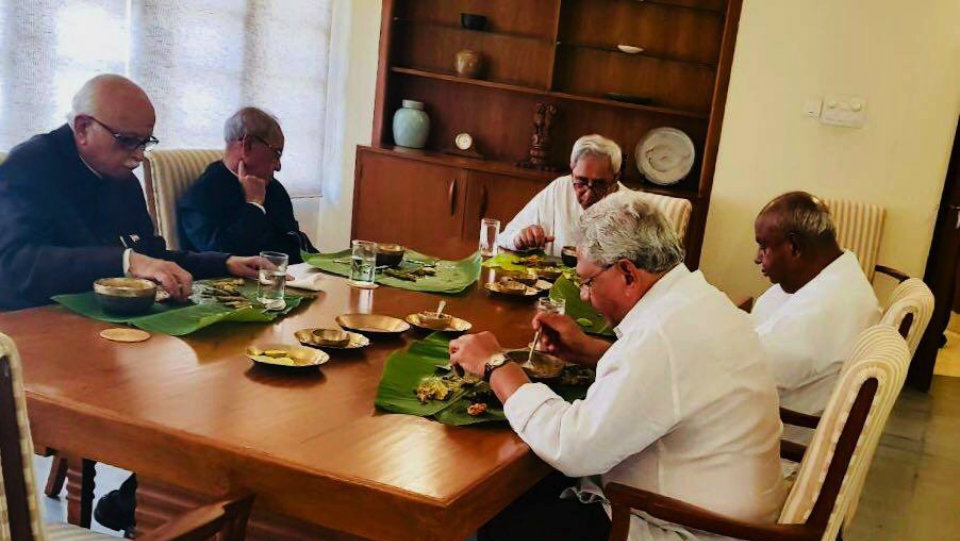 Former President Pranab Mukherjee will address the members of Rashtriya Swayamsevak Sangh (RSS) at its Headquarters in Nagpur on June 7. This has shaken the Congress, silenced the Gandhis, confused the BJP and given hope to the Third Front…but more importantly, it shows that even at 82, Pranab Mukherjee still knows how to stay relevant in politics.

Now there are reports that Pranab Mukherjee, fondly called Pranabda in political circles, is playing a significant role in bringing non-Congress and non-BJP leaders together to form an alternative front ahead of 2019. This report is based on the frequent visits of political bigwigs to the former President’s  bungalow in Delhi.

Also the photo of a luncheon hosted by Odisha Chief Minister Naveen Patnaik, attended by Pranab Mukherjee, H.D. Deve Gowda, Sitaram Yechury and the disgruntled BJP veteran L.K. Advani a few months ago may have added some credence to this reported political development.

In fact, the Gandhis snatched every opportunity away from Pranab Mukherjee because they were insecure. It is said that after Indira Gandhi’s assassination in 1984, Rajiv Gandhi had asked his mother’s trusted aide Pranab, who would become the new Prime Minister now. Pranab Mukherjee had reportedly replied, “The senior-most Minister” which he himself was at that time. Taken aback by his cunning reply and ambition, the Gandhi family became wary of him.

So much so that soon after a novice Rajiv Gandhi himself became the PM,  he did not include the senior-most Congressman Pranab Mukherjee in his Cabinet. A hurt and angry Pranab Mukherjee left Congress and started his own party, the Rashtriya Samajwadi Congress which did not see much success.

READ ALSO  Fine us, but punish them

In 1991,  after Rajiv Gandhi’s assassination, Pranab Mukherjee came back to Congress and he had a chance to be PM but he was not an MP so Arjun Singh and Sharad Pawar became the contenders. But since the number of South Indian MPs were more P.V. Narasimha Rao was called from retirement and made PM. Pranab Mukherjee missed his chance once again.

Then in 2004, when the Congress-led UPA came to power, for his bad luck Sonia Gandhi became the Party boss. How could she give power to a man who never wanted her husband to be PM. So, as expected, Pranab Mukherjee lost a third time.

In 2009, he had a chance again when Dr. Manmohan Singh was out of action due to health issues but even then Pranab Mukherjee was not made acting PM.

Even if the Gandhis did not make Pranab Mukherjee the PM he was just as powerful. So much so that he was called the de-facto Prime Minister of India. He was the main troubleshooter for the government, from the Lokpal Bill to the issue of Telangana. From countering the Opposition charges to cajoling them, he was the quintessential middleman of Indian governance.

In fact, Pranab Mukherjee sensed he will never be PM and finally played his cards to at least become the President of India. And in that effort, he tried to please the Gandhi family and even edited a lopsided two volume book — ‘Congress and the Making of the Indian Nation.’ It had a lot of nice things to say about Rajiv Gandhi, but very little about Sanjay Gandhi and even Indira Gandhi. Guess, it worked as Sonia soon made him the 13th President of India.

In the end, Pranab Mukherjee’s name may be abbreviated as P.M., but he never became the PM.

While Sonia Gandhi may have kept P.M. away from being PM, she should realise had she made Pranab Mukherjee the PM in 2004 or even in 2009 instead of Dr. Manmohan Singh, the Congress today would have been in a much better position and the BJP would still be struggling.

May be Sonia Gandhi, knowing that Congress is a family business like many other political parties, should have followed the rule most successful family businesses follow, which is “Even if you are good, hire people who are better than you, and let them run it while you only monitor.”

If Sonia had let P.M. run the Congress, while she monitored the Party, today her son Rahul Gandhi’s ‘self-proclamation’ of being the next PM candidate would not sound like a joke.

For now, it would be poetic justice if the old man could snatch the PM-ship away from the son of the man and woman who had snatched it away from him. Ah! Karma is a wonderful thing.