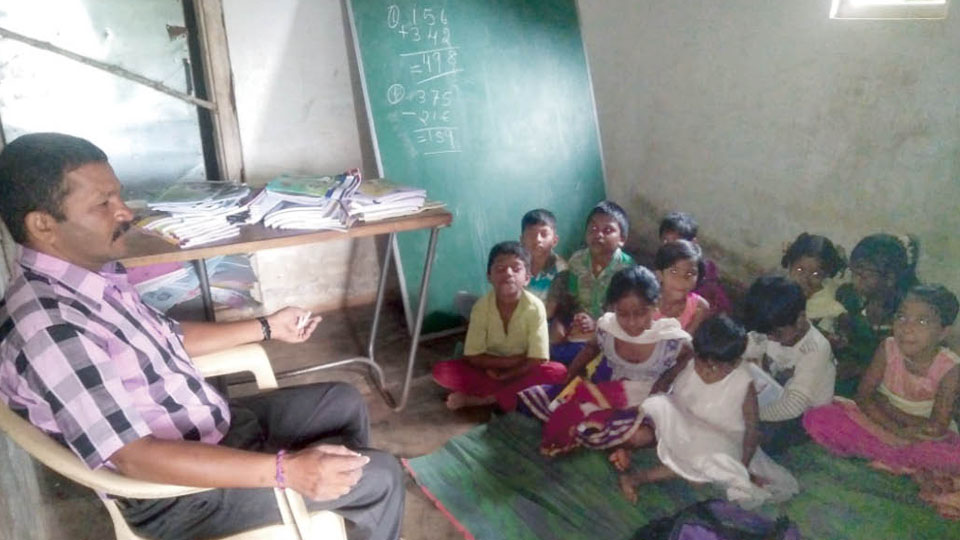 Govt. School runs from a dingy house since 9 years!

Periyapatna: Students of a Government School at Periyapatna are being forced to study in a congested private building as it does not have a building of its own. And taking advantage of the recent summer vacation, the owner of the private building is asking the Education Department to vacate the building as he needs it for some purpose.

This is a classic example of the official apathy towards education though crores of rupees are spent in that sector every year. The plight of the school reflects the commitment of the government towards saving Government Schools though our political leaders speak of Kannada pride and saving Kannada Medium Government Schools from becoming prey to the mushrooming private English Medium Schools.

This is the story of K.S. Kalamarigowda Nagar Government Primary School where the school is functioning from a private building. The private building sports a small name board that indicates that this is a school. The classrooms are congested where teachers, students, bags, blackboards and handful of furniture jostle for space. Ironically, though the school has its own land, construction of the classrooms has not been completed and the half-completed construction has now turned into a place where cows take shelter during rains and strong winds. 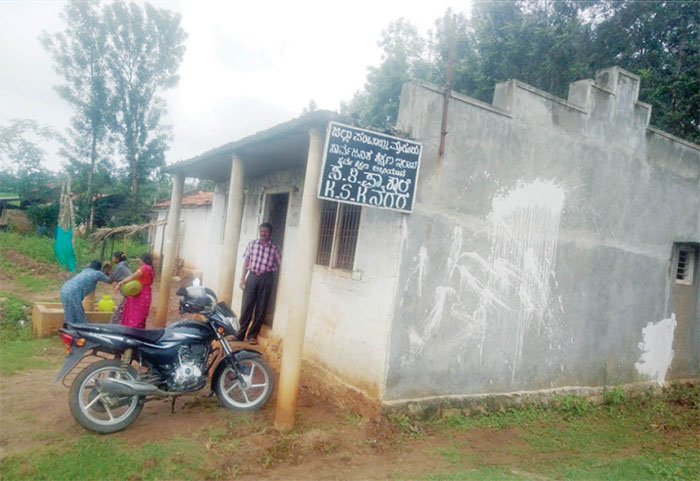 The signboard that displays the school name.

As per government policy, each village across the State has to have a school. Accordingly, 13 years back, the school was planned and started at the Janatha House of a villager. Later, funds were released for the construction of the school building at the land owned by Annamalai and Belliamma who donated the land for the cause of education. The government sanctioned alternative land to the donor couple.

However, due to non-payment of money, Dorairaj too abandoned the construction after constructing the outer wall of the school building. Though he fixed the door and window frames, the works on the ceiling, partition and the floor were not completed, said former Gram Panchayat member Mahadev.

Later, Zilla Panchayat Member Chandresh sanctioned money and the responsibility of building completion was taken by former ZP Member H.R. Gopal. However, not an inch of construction was taken up by Gopal and whatever construction has taken place till now is in a dilapidated condition. The brick walls have developed cracks and certain parts of wooden and window frames have been eaten away by termites which have drilled holes in the wood.

Though nine years have passed, there seems to be no enthusiasm on the part of the authorities to start the school at its own building. While some elected representatives say that the existing walls have to be demolished and fresh construction must be taken up, others have opposed it as the Panchayat has already spent lakhs of rupees on it.

After the Janata House from where the school originally operated became dilapidated, the officials were able to convince villager Raju to part with his house and accommodate the school. Somehow, Raju agreed. But now he wants his house back. According to Raju, the officials had asked space in his house only for six months.

“It has been nine years now and the authorities have not bothered to construct the own school building. I was told only six months and already nine years have passed and there is no trace of any new construction. I want my house back as I need the space to take care of my family,” Raju told Star of Mysore.

Even Belliamma is demanding her land back where the school has been constructed half. “At the time when we donated the land for the school, the authorities told us that we will be provided many facilities. We have not got any facilities and we want the land back for us to do agricultural work,” Belliamma said.

Even Raju’s house is congested and it has little ventilation. There are over 18 students and they are taught by teacher Diwakar. Along with the academic activities, Diwakar has to adjust space at Raju’s house for the mid-day meal scheme and to store groceries and vegetables. 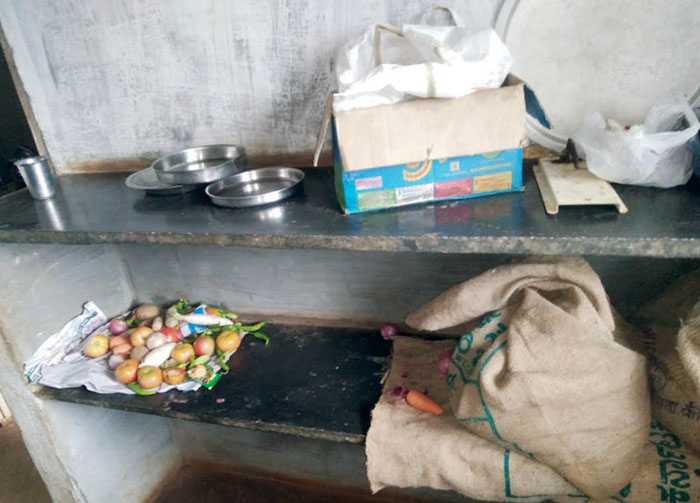 The kitchen of the house doubles up as a kitchen for the mid-day meal scheme at the school.

According to Diwakar and local leader Subramanya, many times they have appealed to the authorities to complete the school building construction but their appeals fell on deaf ears.

When the schools re-opened on May 28, Raju arrived and prevented the students from entering his building. He even locked the doors and left with the keys. However, he was convinced by the village elders to open the locks for the sake of the students. He relented after much persuasion. But Raju is adamant that he wants the building and has asked the students to be shifted to any other building.

School Development Committee President Ganesh said that he had appealed to the then MLA K. Venkatesh but nothing worked out. “I will make a representation to new MLA K. Mahadev and hope to get some funds,” he said.

If at all the present school is merged with any other nearby school, the students have to walk a  kilometre to reach the school. “This is not practical and efforts must be made to open the school at K.S. Kalamarigowda Nagar,” said C.R.P. Dileep Kumar of Malangi Cluster.