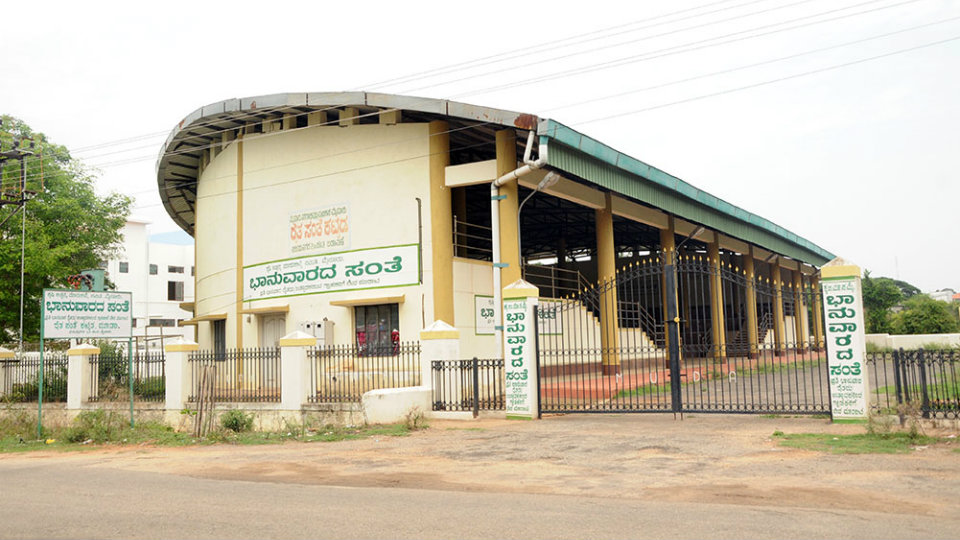 An Apology of Raitha Santhe

At a time when the State Government is having several brain-storming sessions with top finance officers on the modalities, complications and the impact of farm loan waiver, this Weekend Star Supplement brings you the pathetic story of Raitha Santhe and Mini Markets that have been constructed across Mysuru. These markets, built with the sole aim of empowering farmers, are in a state of utter neglect. If only the money was judiciously used, our farmers would not have been driven to desperation and take the extreme step of committing suicide. And there was no need for a farm loan waiver if the pro-farmer schemes announced in every budget are implemented in letter and spirit.

Raitha Santhe: Bane than a Boon

The government (read political leaders) in all its wisdom displays unbridled enthusiasm to inaugurate any newly-constructed building. However, the same fervour goes missing once the inauguration is over. This has resulted in lakhs and crores of rupees of the tax-payers’ money being wasted and the buildings lying in utter state of neglect.

Many Mini Markets in different places across the city including the Raitha Santhe building that has come up in Vijayanagar 2nd Stage are lying unused since many years. The reason for this is total disdain shown by the elected representatives and the official apathy. Ironically, the same government that always claims to be the champions of the farmers’ cause and welfare, neglects such buildings that have been constructed for the benefit of farmers. Once constructed and inaugurated, the buildings go to the dogs with weeds all over and they become a haven for anti-social elements and drunkards. So the very purpose of constructing such buildings is a waste of time and money.

The pathetic state of the buildings perfectly portrays the so-called commitment of the people who govern us towards the farmers. If utilised and planned properly, these Mini Markets will prove a boon to the farmers and they can sell their produce directly from farm to consumers without the role of any middlemen.

The government spends crores of rupees every year to construct such buildings across the State. And every party that is in power speaks of farmer empowerment without doing much in that direction and force the farmer to depend on loan waivers.

Seeing the pathetic condition of these markets, residents of Mysuru have questioned the rationale behind their construction. If Mysuru has 9 such useless Markets, think of the number of Markets that have been constructed across the State. If only the money was judiciously used, our farmers would not have been driven to desperation and take the extreme step of committing suicide.

The Raitha Santhe building in Vijayanagar 2nd Stage was completed almost ten years ago but it has not been fully utilised. The spacious building constructed after investing several lakhs of rupees has all the basic facilities. The only redeeming feature here is the posting of a security guard to protect the place from any illegal activities.

This building was inaugurated on July 15, 2017 by the then Chief Minister Siddharamaiah. The main purpose of Raitha Santhe was to see that the farmers can sell their produce directly to the consumers every Sunday without the interference of middlemen.

The MUDA had even rented the place to APMC (Agriculture Produce Market Committee) for a monthly rent of Rs. 70,000. Though the building was inaugurated with much fanfare, it functioned only for a few days and then everything fell quiet.

If this is the state of affairs of the Raitha Santhe, the condition of Mini Markets are really pathetic. The nine Mini Markets constructed by MUDA are lying useless. While one market is almost collapsing, in a few others, the concrete roofs are peeling apart and there is wild growth of shrubs where snakes and scorpions abound. The local residents are upset with all kinds of illegal activities going on in these open spaces. They have every reason to be angry as there are tell-tale signs of liquor bottles and cigarette butts strewn all around. Even the toilets constructed here are stinking.

A peek into nine Mini Markets in Mysuru:

The only solace here is that the Mini Market is of some use as one or two people have taken shops on rent from MUDA and sell fruits and vegetables to eke out a living. However, except for these two shops, the remaining area is crying for attention. It is being used to park vehicles and stack unwanted things.

The condition here is appalling. The whole place is covered with shrubs and wild grass. The wire mesh put around the Market is rusting. The roof is collapsing and the materials used for electricity connection is fully covered with dust. It might even have been stolen by thieves. As it is not used for the purpose for which it was built, a few of the locals are tethering their cattle and hence this place has become a cow shed!

Dozens of empty liquor bottles are lying around inside this Mini Market. Though there is so much of traffic and movement of people in the day, this place has become a haven for drunkards from morning itself. 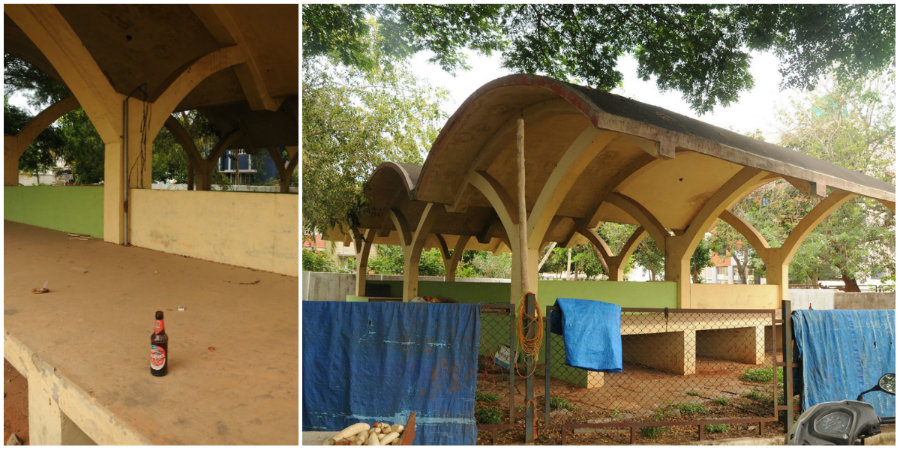 However, the residents here allege that as night descends, it turns into a den for illegal activities and they are cursing the officials and people’s representatives for this state of affairs. Even though there is a market here, just outside there are vendors on pushcarts selling fruits and vegetables. Though this place looks like it is maintained, once one enters inside, its true colours emerge. There is garbage all around and once the nightfall approaches, the drunkards’ choicest abuses rent the air, complain the residents. 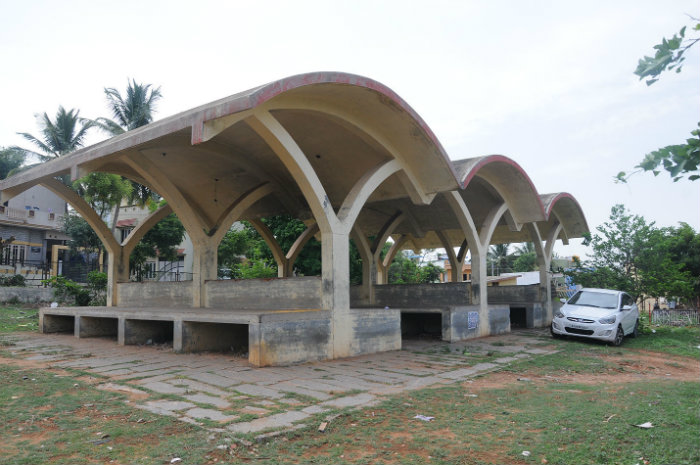 They want the place to be converted instead into a park or a playground. One of the residents, Limsha Biddappa, speaking to Star of Mysore said, “This place has become a haven for illegal activities and drunkards. I wish the MUDA converts this into a park or playground so that it will be of use to the locals.”

This Market looks a bit clean because it has been converted into a godown. Though there are separate toilets for men, women and physically challenged, they have been kept under lock and key. There are parks all around the Market and the residents feel that if only there was a functioning Market inside then they could have finished their purchases after morning and evening walks. Even this building is lying in a state of neglect and as it becomes dark there is no proper protection and the Market is crying for attention. 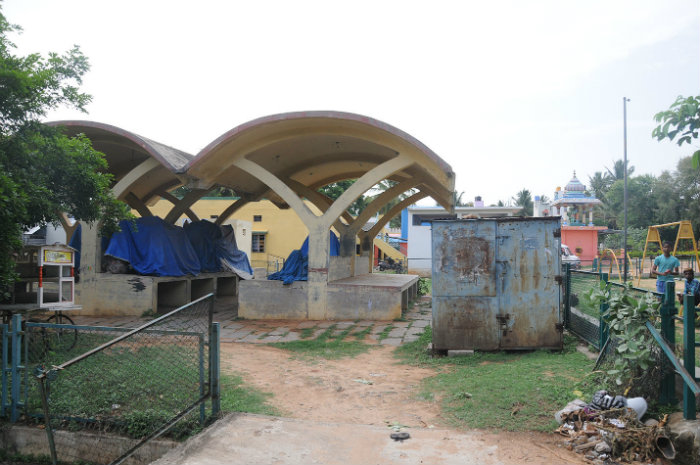 Mini Market in Sharadadevi Nagar 2nd Stage – Even this building is being destroyed with growth of wild shrubs and the peeling of the roof. The fencing around the Market is collapsing. The same is the condition of the Mini Market near Triveni Circle in Kyathamaranahalli. 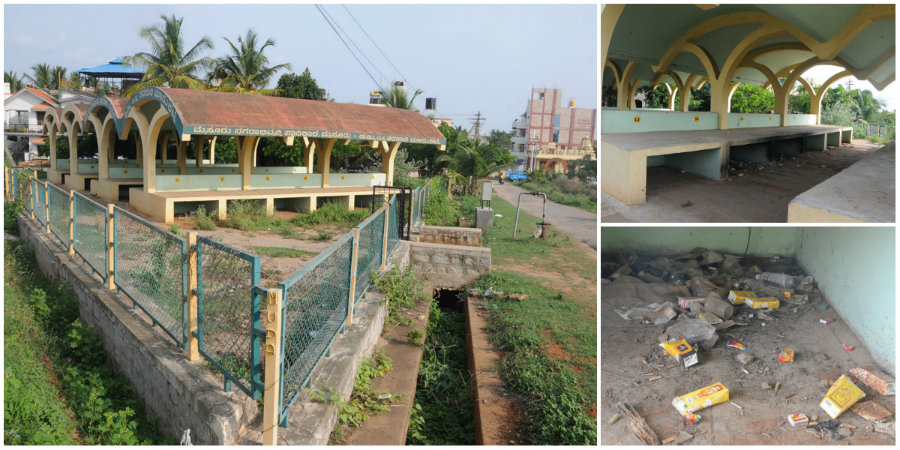 The Mini Market in JP Nagar 2nd Stage, which was handed over to Mysuru City Corporation, has collapsed. “Alternative arrangements have been made for the traders who were using this Market,” said Corporator B.L. Bhyrappa.

Mini Market next to High Tension Line, Chikkaharadanahalli 1st Stage – The MUDA has given a temporary sanction letter to Jaivik Krishik Society, Bengaluru, at Rs.14,400 rent per month, to sell organic products.

‘Poor response the reason for neglect’

Even though the Raitha Santhe building has been given free of cost to hold shandies (farmers market), the response has been very poor. After the inauguration on July 15, 2017, a few shandies (santhe) were held. However, later neither the farmers nor farm product producers have bothered to utilise the Market. In spite of security and cleaning staff being provided they are not willing to use the building which has been rented out at Rs.70,000 a month to APMC. Since the place is lying unused, the rent has not been paid and it is being planned to return the building to MUDA. – S. Siddegowda, President, APMC