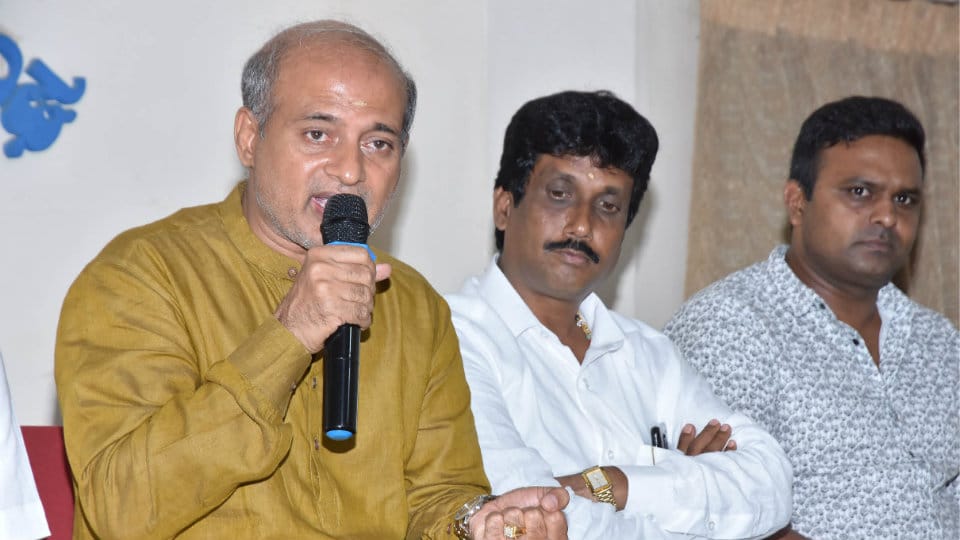 It’s a battle between ‘Dharma’ and ‘Adharma’: S.R. Mahesh

Addressing a press meet at Pathrakarthara Bhavan here yesterday in reply to  Vishwanath’s presser in the city on Sunday, Mahesh, referring to Vishwanath’s comment that Mahesh had fed poison to JD(S) Supremo H.D. Deve Gowda’s family, said that Vishwanath was himself a deadly poison.

Making sarcastic remarks on Vishwanath being called ‘Halli Hakki’, Mahesh said that Vishwanath was indeed a ‘Hakki’ (bird) who migrated from one place to another.

Claiming that he was not at all indulged in transfers and other corrupt practices as a Minister in the H.D. Kumaraswamy Cabinet, he reiterated his invitation to Vishwanath for a debate at any temple in this regard.

Calling Vishwanath in singular as a ‘political prostitute’ (Raajakiya Vyabhichaari), Mahesh alleged that Vishwanath was a dangerous animal in the garb of a cow, always waiting to devour others.

Asserting that the war between Vishwanath and him was a battle between  ‘Dharma’ and ‘Adharma’, Mahesh termed Vishwanath as a habitual liar, with no interest for the welfare of the people.

Questioning Vishwanath why he was unnecessarily targeting JD(S) leaders and the party, which gave him a political rebirth, Mahesh said that Vishwanath’s remarks against him were disgraceful.

Mahesh also sarcastically questioned which was Vishwanath’s next destination as he is a migratory bird hopping political parties at his convenience.

Commenting on Vishwanath’s claim that he could not give a ticket to his follower in K.R. Nagar local body polls, Mahesh said that only one out of six candidates recommended by Vishwanath managed to win and this showed Vishwanath’s ‘popularity’.