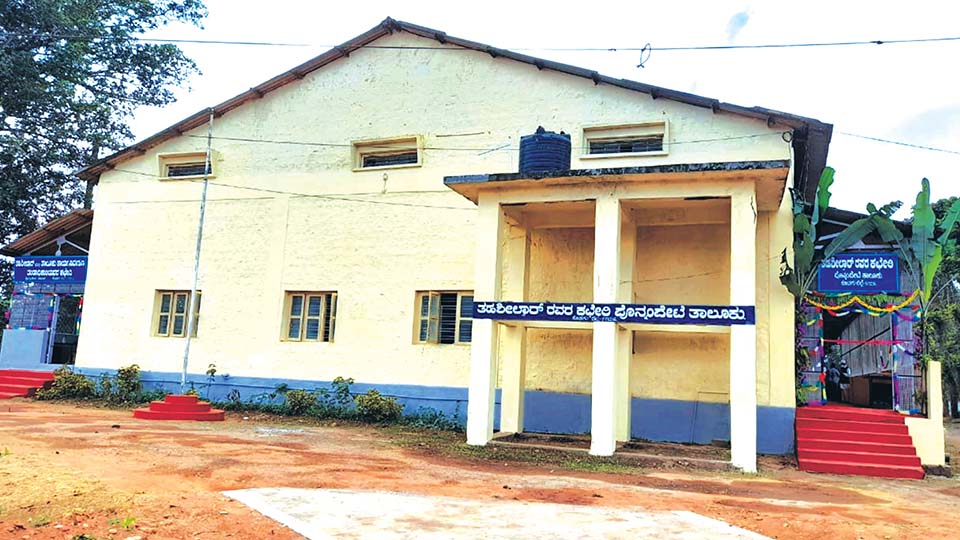 Ponnampet: The long-standing demand for the creation of Ponnampet taluk in Kodagu district was fulfilled today with Revenue Minister R. Ashok inaugurating the new taluk at a simple programme held at Ponnampet Taluk Office this morning. With the inauguration, Ponnampet taluk, which has been carved out of Virajpet taluk, has come into official existence, months after the Gazette notification in this regard was made on July 3, 2020.

Ponnampet Taluk Action Committee, Citizens Action Committee and a host of other organisations had been demanding the formation of the new taluk ever since it was conceptualised 18 years ago in 2002.

Speaking after inauguration, Ashok said that he was virtuous to have got the opportunity to inaugurate the new taluk as Revenue Minister.

Maintaining that he has a lot of affection, trust and respect for Kodagu district, he said that his Department has been working to expedite all pending initiatives.

Pointing out that the 18-year wait of the people has ended with the inauguration of the new taluk, Ashok declared that the Gazette notification on the formation of new Kushalnagar taluk, which has been carved out of Somwarpet taluk, will be issued shortly and all other official procedures will be completed in a month. He asserted that he was sure of inaugurating the new Kushalnagar taluk as well in a month.

The Minister further said that the formation of two new taluks (Ponnampet in South Kodagu and Kushalnagar in North Kodagu) in the district will geographically help the residents in their daily work and activities.

Highlighting the initiatives taken by the Revenue Department after he took charge of the Ministry 16 months ago, Ashok said that old age pension will now be credited directly to Aadhaar-linked Bank account of the beneficiaries, which he claimed was a revolutionary step in maintaining transparency in the delivery mechanism of Government benefits.

Virajpet MLA K.G. Bopaiah, in his address, wanted the Government to appoint a permanent Tahsildar for the new taluk and also sanction more funds to provide necessary infrastructure.

Madikeri MLA M.P. Appachu Ranjan urged the Govt. to release Rs. 10 crore for infrastructure development in the new taluks of Ponnampet and Kushalnagar.

However, Kodagu District Minister V. Somanna and Mysuru-Kodagu MP Pratap Simha were conspicuous by  their absence.