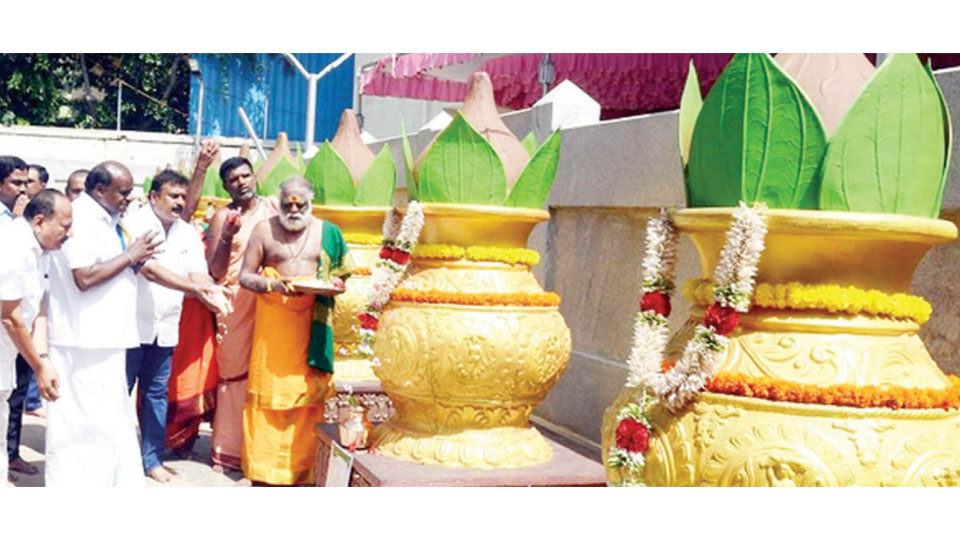 Bengaluru: The ‘Kalasha,’  which contains water collected from rivers across the State during the recently held Janata Jaladhare Yatra by the JD(S) demanding implementation of all irrigation and drinking water projects of the State, was consecrated at JP Bhavan, the JD(S) State Headquarters, here on Thursday.

The 10 ft. tall ‘Gangajal Kalasha’ which is filled with 500 litres of water collected from various rivers, was consecrated with the performance of pujas and rituals by a team of priests led by Dr. Bhanuprakash Sharma of Srirangapatna.

The rituals, which commenced from 9 am, featured conduct of Gana Homa, Navagraha Homa, Parjanya Homa, Ganga Puja and Purnahuti  in the presence of former CM H.D. Kumaraswamy and other JD(S) leaders.

Following the consecration, pujas will be conducted to the Gangajal Kalasha every day for one year from now on.

The Mantapa, in which the Kalasha is kept, is specially designed in accordance with the architecture that portrays the rich heritage of Karnataka. To ensure that the water in the Kalasha does not get contaminated with the passage of time, the entire Kalasha is installed with  an UV-Ozonation apparatus.