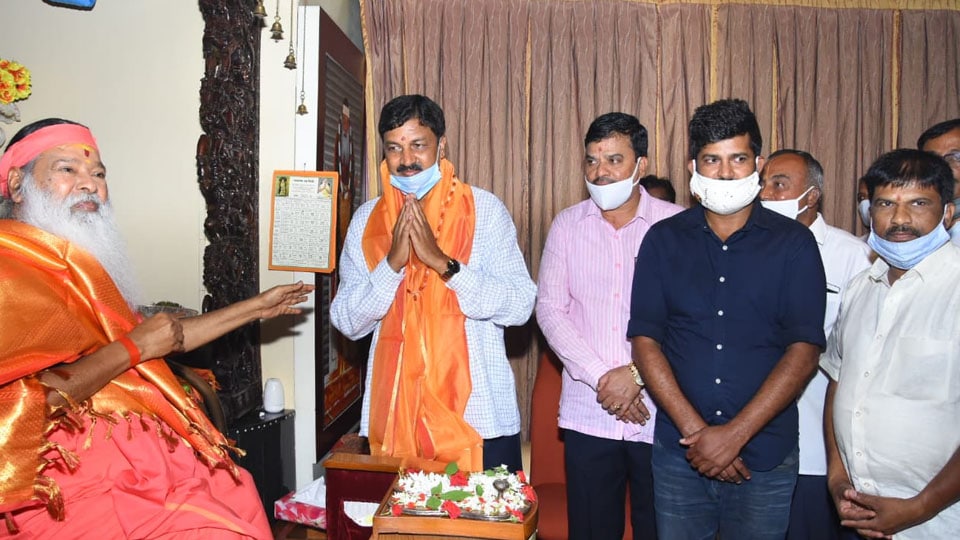 Mysore/Mysuru: Water Resources Minister Ramesh Jarkiholi, who visited Suttur Mutt and Sri Ganapathy Sachchidananda Ashram in city this morning, sought the blessings of both the Seers.

The Minister, after seeking the blessings of Suttur Seer Sri Shivarathri Deshikendra Swamiji, launched the Edu Kaushal App developed by AVK Resource Centre, an incubate at SJCE-STEP for which the Seed Fund was provided by SJCE-STEP.

Edu Kaushal App is developed for both Kannada and English medium students to improve the academic skills of students from Class 1 to 5, based on their textbook through Smartphones or Tabs and develops listening, speaking, reading and writing skills required for academic progress among others.

The App was launched in the presence of MP Pratap Simha, JSS Mahavidyapeetha Executive Secretary Dr. C.G. Betsurmath, Secretary S.P. Manjunath and others.

Meeting on invasion of locusts held

Speaking to the media, Jarkiholi said that a meeting with the officials of the Water Resource and Agriculture Departments was held to discuss the preventive measures to be taken to control the invasion of locusts, which are invading many cities in the country.

To a question on MLC ticket to former Minister A.H. Vishwanath, he said that he was not the decision-maker and added that the High Command would take a call only after holding discussions.

Responding to the opposition by former CMs Siddharamaiah and H.D. Kumaraswamy to name Yelahanka Flyover after freedom fighter Veer Savarkar, the MP asked the former CMs to visit the jail in Andaman and Nicobar Islands where Savarkar was imprisoned to know about the freedom fighter.

Questioning the Opposition parties, Pratap Simha said why did the Congress party not remember the name of Kanakadasa while naming Indira Canteens or the name of any Kannadiga while naming Bandipur and Nagarahole Reserve Forests after Gandhi family members and why are they remembering Kannadigas now when there is a proposal to name the flyover after Veer Savarkar? The MP felt that the Congress party should wake up and indulge in healthy politics instead of only opposing for the sake of opposition.