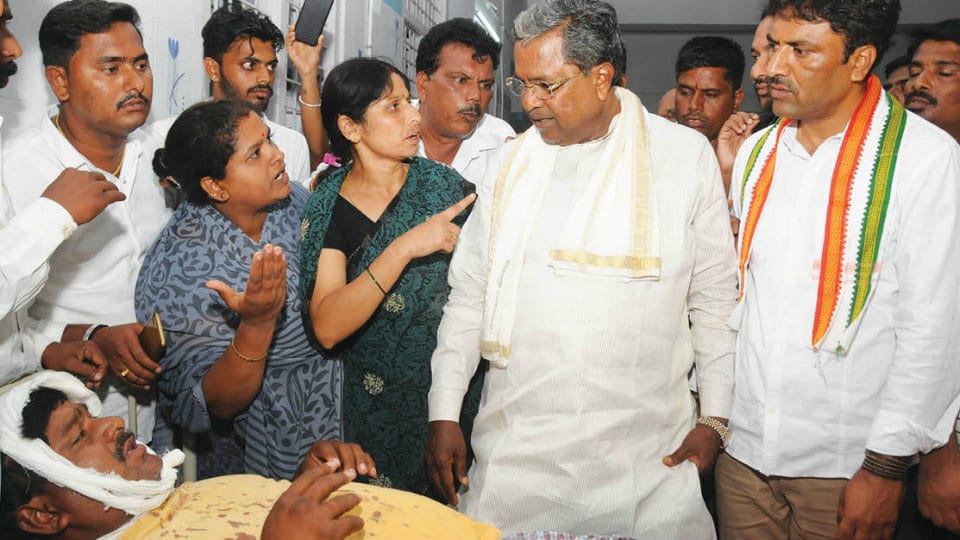 Mysuru: A clash between JD(S) and Congress workers at Naganahalli in the taluk on Saturday night has left four people injured, who are undergoing treatment at K.R. Hospital here. Chief Minister Siddharamaiah visited the hospital yesterday and enquired the health of the injured.

The injured, speaking to SOM said that on Saturday at about 10.15 pm, they were sitting in the Naganahalli Congress campaign office, when JD(S) workers who were standing in front of the JD(S) office nearby, hurled abuses using foul language and picked up fight. When we questioned their behaviour, they assaulted us with machetes and stick.

They further said that on Saturday morning too, when actor Darshan had come for campaigning, JD(S) workers created problems and alleged that they were assaulted for the same issue.

Meanwhile, Metagalli Inspector Raghavendra Gowda told Star of Mysore that they rushed to Naganahalli on receiving information about the clash and added that by the time they reached the spot, everything was peaceful. But based on the complaint, an assault case has been registered and investigation is going on, he said.

The Inspector further said that the a few people were brought to the Police Station for enquiry and added that they (Police) would trace the culprits soon and take legal action against them. No arrests have been made so far.