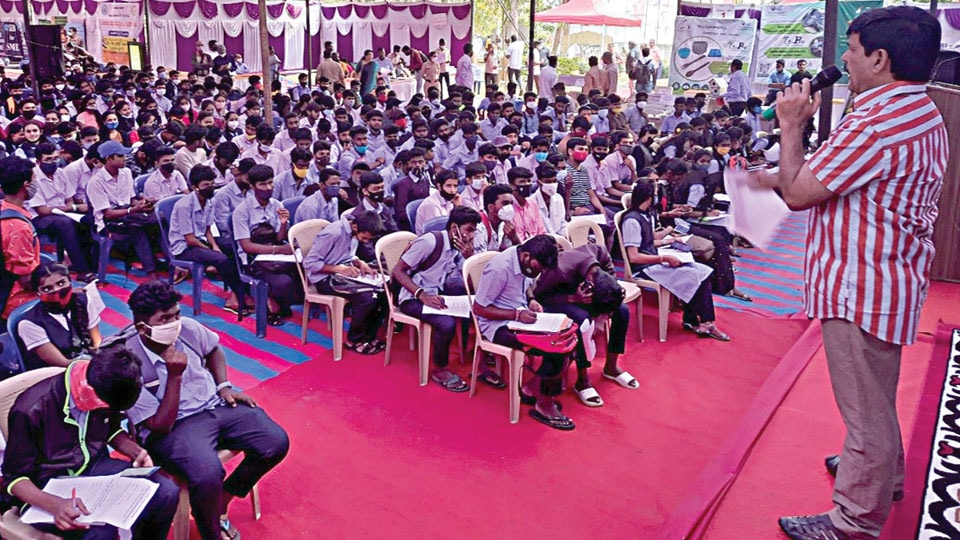 Mysore/Mysuru: The four-day job-generation and skill training mela organised by K.R. BJP MLA S.A. Ramdas at different venues of the constituency, ended on Friday, with thousands of job-seekers and self-employment aspirants taking part.

The mela, which was scheduled to take place for five days from Jan. 4 to Jan. 8, was cut short by a day due to the enforcement of weekend curfew on account of COVID pandemic.

However, the fifth and last day of the mela, which was supposed to take place yesterday, was advanced by a day and clubbed with that of the fourth day event at Samrat Kalyana Bhavan on Udayaravi Road in Kuvempunagar on Friday.

Delivering the valedictory address at Samrat Kalyana Bhavan on Friday, MLA Ramdas said that the event was organised with an objective of giving a new concept for the country in job-generation and skill training. Maintaining that the four-day event was a huge success as thousands of students and job seekers benefited from it, the MLA attributed the success to the untiring efforts of numerous party workers and officials of various Government Departments.

Mayor Sunanda Palanetra in her address, said that Prime Minister has focused much on skill development and Ramdas has taken this initiative forward by organising the mela. Unemployment problem will come down by a large extent only if all other Legislators of the State organise such melas, she added.

Corporator Shivakumar, who is the leader of the ruling party in the MCC, said that MLA Ramdas who reached out various Government Schemes to over 71,000 beneficiaries during the Modi Yug Utsava, which the MLA held in September last, has now successfully organised a similar event aimed at job-generation and skill training for youths. Through such events, Ramdas has become a model to his counterparts in the rest of the State and the country, he added.