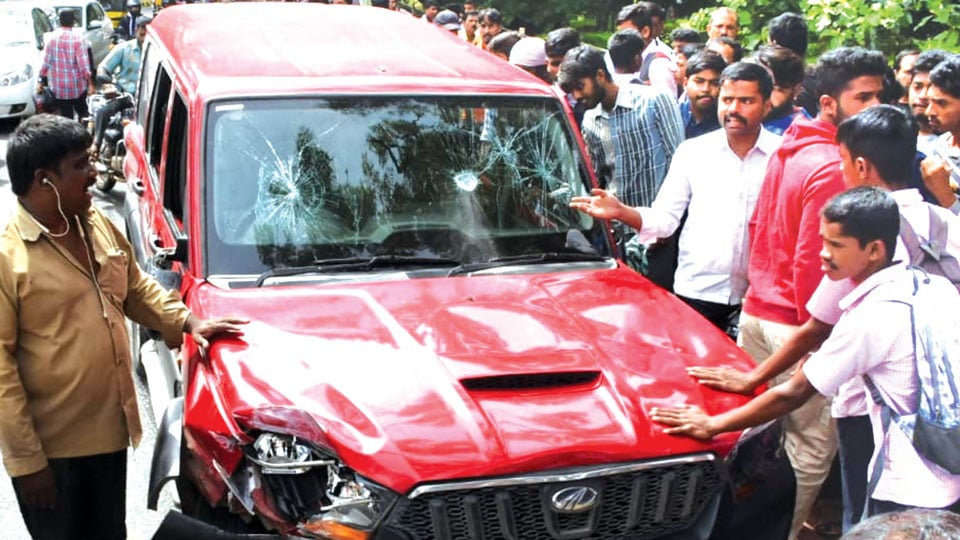 Mysuru: The minor boy, who drove a rented Scorpio vehicle in a haphazard manner on city roads on Tuesday morning resulting in the death of a girl student has been sent to the Remand Home, while the person, who had taken the vehicle on rent has been remanded to Judicial Custody.

It may be recalled, Manjunath, had taken the vehicle from a car rental company and had parked it in front of his house, when his neighbour took the vehicle keys from him saying that he would park it to the side.

Instead of parking the vehicle, Manjunath’s neighbour took the vehicle to Yuvaraja’s College where he picked up his friend Raju, who took to the wheels and caused serial accidents  seriously injuriing two girl students – Ashwini and Prema near MUDA Circle. Later, Ashwini succumbed to injuries at a private hospital. The public, who were following the vehicle from MUDA Circle, waylaid the vehicle near DC Office, caught the duo and thrashed them before handing them over to the Police.

K.R. Traffic Police, who had registered a case, arrested Manjunath and took Raju into custody. They were produced before a Magistrate, who remanded Manjunath to judicial custody and ordered Raju to be sent to the remand home.

K.R. Traffic Inspector Jagadish, speaking to SOM said that a case was registered against Manjunath for giving the rented vehicle for use to others and a case was also registered against Raju for driving the vehicle in a rash and negligent manner resulting in the death of a girl and causing injuries to another girl.

Meanwhile, ACP (Traffic) G.N. Mohan told SOM that usually in accident cases; the accused is given Station Bail and was not being sent to judicial custody. They used to pay the fine and obtain Station Bail.

This used to result in some of those obtaining Station Bail drive the vehicle in a rash and negligent manner again, he said and added that the Magistrate ordering judicial custody in such cases will serve as a                        warning to others.

The ACP has warned vehicle owners against giving vehicles to minors and to those who do not have Driving Licence (DL) failing which they would invite jail terms.