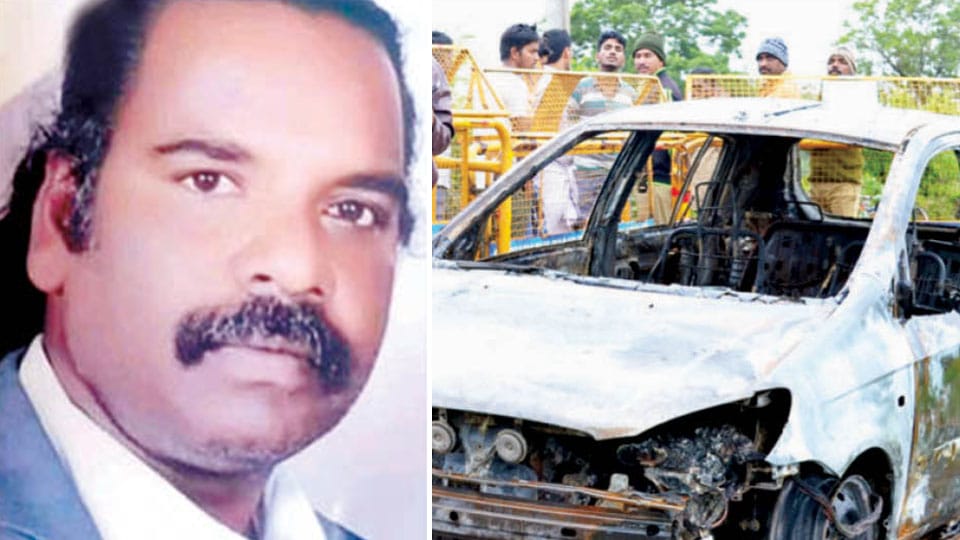 Chamarajanagar: The  Police have solved the case of an unidentified person, who was found burnt along with the car on Thursday (Aug. 8) night and have arrested three persons including a woman involved in the case.

Police investigations have revealed that Rangaswamy was murdered following his illicit relationship with Basavarajeshwari, according to Police sources.

The Police, who found a Hyundai car and the body completely charred on the road between Halahalli and Nitre villages, traced the address of the car owner through the car’s chassis number and came to know that the car belonged to J.M. Rangaswamy of Chamarajanagar.

On further enquiry, the Police came to know that the charred body was that of Rangaswamy, which was confirmed by the deceased’s son after examining a few items which were found         at the spot.

Begur Police, who registered a case in this regard, began their investigation and came to know that Rangaswamy had made several calls to a particular mobile number and found out that the mobile number belonged to Basavarajeshwari. The Police, who took Basavarajeshwari into custody, interrogated her, during which they (Police) came to know about the illicit relationship         and the murder.

During interrogation, it was revealed that on Thursday evening, Rangaswamy reportedly took Basavarajeshwari to an industrial area near Badanaguppe and Raghu and Siddu, who arrived there, allegedly assaulted Rangaswamy and killed him. They later took the body of Rangaswamy in the car and burnt the body along with the car between Halahalli and Nitre villages.

The Police, who have arrested the accused, have taken action according to the law.