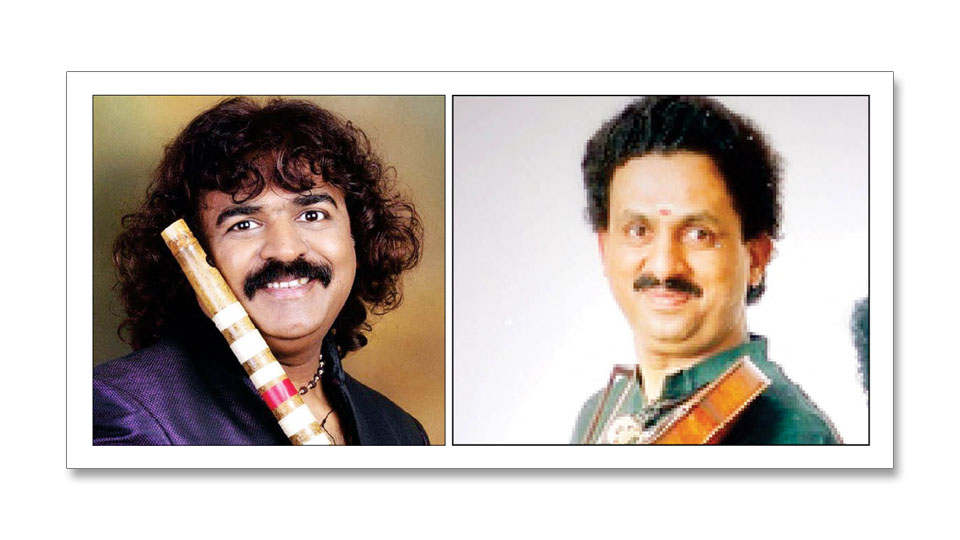 Pt. Pravin Godkhindi and Vid. Mysore M. Nagaraj are to perform a jugalbandhi, aptly titled ‘Raaga Taranga’, on Saturday, the 18th August at 5.30pm at Nadabrahma Sangeetha Sabha,  JLB Road. This is in commemoration of the 4th anniversary of Raaga Music Academy.

Raaga has so far organised 61concerts, which have been very well received. An innovative approach of bringing into focus the three vedic sciences — Music, Ayurveda and Yoga — conceptualised by Dr. Poornima K. Murthy, its Managing Trustee, promotes a culture of wellness.

A lecture series by Dr. N.V. Krishnamurthy on Healthy Living through Ayurveda and Yoga precedes the monthly concerts. Artistes, young, old, established, budding and the superstars, have all performed on this platform.

Profile: Pravin Godkhindi, a child prodigy, has Pt. Venkatesh Godkhindi and Vid. Anoor Ananthakrishna Sharma as his Gurus. This top ranked artiste by AIR, in Hindustani Bansuri, is the first Indian to represent Bansuri at the World Flute Festival at Argentina.

Recipient of National awards for films Beru and Vimukthi, he has been bestowed with titles such as Surmani, Nada Nidhi, Sur Samrat, Kala Praveena.  A first class engineering graduate, he has performed all over the globe with greats like Ustad Zakir Hussain, Dr. Balamurali Krishna, Pt. Vishwamohan Bhatt, Dr. Kadri Gopalnath and the likes. He runs a fusion band called Krishna, which performs Hindustani, Karnatak and Western music.

Mysore M. Nagaraj is another child prodigy and a violinist of International repute. Son and disciple of Prof. S. Mahadevappa, he has carved a niche for himself for his musical acumen and technical virtuosity.

He has been featured in duets with his illustrious brother Dr. Mysore M. Manjunath and jugalbandhis with top notch artistes of various genres. Nagaraj has accompanied almost all legends such as Dr. Balamurali Krishna and Dr. K.J. Yesudas. Decorated with innumerable awards and titles like Asthana Vidwan of Datta Peetham, Mysuru, Kanchi Kamakoti Peetham, Sangeetha Samrat, prestigious Sangeet Natak Academy award, Karnataka Rajyotsava award, he has regaled audiences all over the world, including some Heads of State.

The accompanying artistes of the day are no less well accomplished. Vid. Arjun Kumar on the mridanga and Pt. Rajendra Nakod on the tabla are highly rated percussionists and most sought after. They have performed beyond borders many a time with the best of artistes.