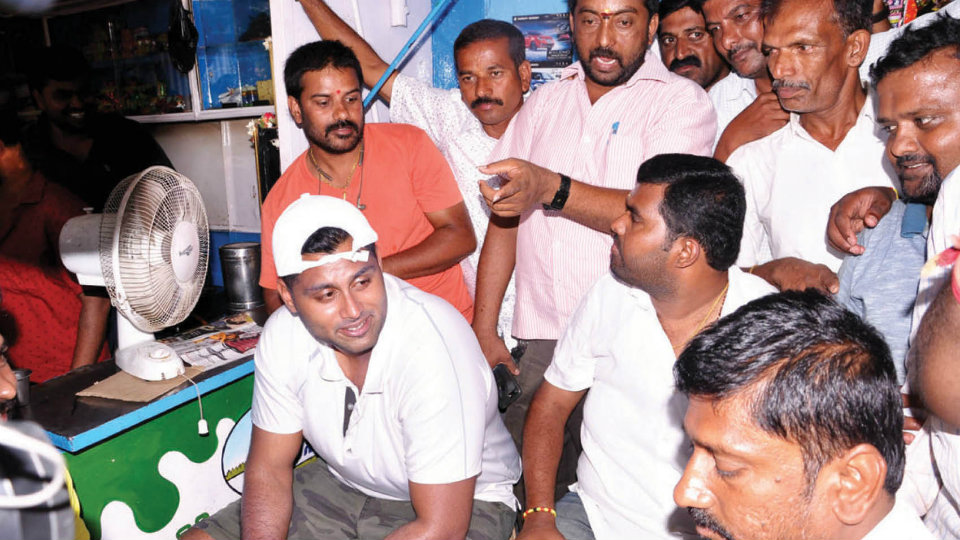 Says sarcastically he is going to Mysore Airport to fly to Singapore !

Mandya:  He is called the ‘Junior Rebel Star’ or ‘Ambarish Junior’ and his popularity is on the rise after the demise of his father, the original ‘Rebel Star’ M.H. Ambarish who has left an indelible mark in politics and in the world of cinema.

Following his father’s footsteps, Abhishek Gowda stood like a rock behind his mother Sumalatha Ambarish during her political campaign starting from day one and even before she announced that she will enter politics to take her late husband’s place. He was with his mother throughout the campaigns and even held separate rallies to woo voters.

And after the hectic and gruelling schedule, he arrived in Mandya yesterday and met a few friends and supporters. Like his father used to do, Abhishek visited a tea stall located near Mahaveer Circle of Mandya. The stall is owned by Chandru who also runs a Nandini Milk Parlour. His friends and locals recall, even Ambarish used to visit the tea stall and other small roadside shops to interact with his fans and friends, shedding all inhibitions.

Wearing a white T-Shirt, green shorts and a white P-Cap which he wore on the reverse, Abhishek came from Bengaluru and sat in the stall. Like his father who had a great sense of humour, Abhishek told his friends, “I asked my driver to go to Singapore but he brought me here and this is Singapore.”

Through his dialogue, Abhishek was hitting at his critics who had spread the rumour that he (Abhishek) and his mother will fly to Singapore soon after the elections. A fake air ticket to Singapore allegedly booked by Sumalatha and Ambarish was circulated to confuse the voters.

“I had promised the owner of this tea stall that I would visit the stall after the election to have a cup of jaggery tea. Now that the election is over, I am here as promised,” he said. “That day my friend Induvalu Sachidananda had told me that this tea stall serves good tea made of jaggery. When I visited here during elections the tea guy served me tea made of sugar. But now he gave me jaggery tea which is really good,” he added taking sips from the glass.

Slamming rumours that he and Sumalatha would go to Singapore after the election, Abhishek said, “We are here in Mandya not Singapore. If anybody doubts it, they can come here to Mahaveer Circle and see for themselves.” He added in a sarcastic tone, “From here, I will leave to Mysore Airport and take a flight to Singapore. Those who have spread the rumours will get the message.”

He said compared to previous election, more people had cast their votes this year. “So there are more chances of Sumalatha winning,” he added. “I am happy that there are no mikes, no sound and no crackers,” he said.

Abhishek later celebrated the birthday of Induvalu Sachidananda and made his friend cut a cake inside the tea stall. He had lunch at Sumalatha’s rented house at Chamundeshwarinagar along with his friends and left for Bengaluru via Nagamangala at 3.30 pm.