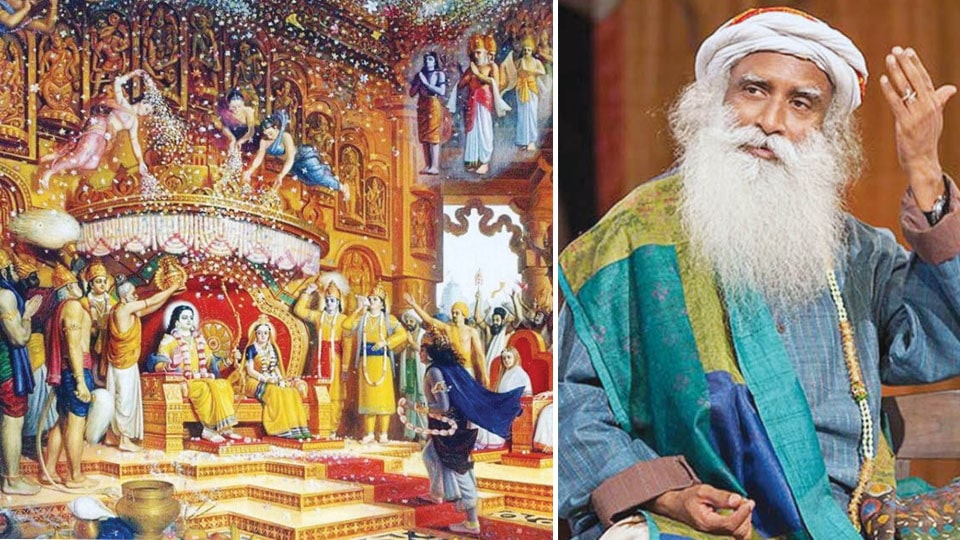 This is a rarely told story of an incident in Ramayana, as narrated by Sadhguru Jaggi Vasudev.  The story of a dog demanding Justice. Do take it with a pinch of salt, since in this story dogs could talk and demand justice! But the underlying message was something which I liked and  thought I should share it with Star of Mysore readers.

Sri Rama was known to be a just and caring King. Everyday, he would sit patiently and hear the woes of all people who came to him for justice. One day, as the day came to an end, he told his brother, “Go and see if there is anybody else waiting for a hearing.” His brother Laxman went out, looked around, found nobody and came back and said, “there is nobody. We can call it a day.” Sri Rama again asked him to go and have a re-look. Laxman was surprised,  but still went and found no one. As he was turning back, he saw a dog, sitting with a sad face, badly injured on the head waiting patiently near the door of the Palace. The dog said, “I want justice. I have been beaten up for no reason.”

Laxman took the dog inside the court. The dog told, “Oh Rama, I want justice. For no reason, an act of violence  has been committed on me. A man called Sidda, a beggar, hit me on my head without any provocation.” King Rama called his courtiers and asked them to summon the beggar, Sidda, who admitted that he had indeed hit the dog in a rage, as he was hungry and unable to get some food and the dog was sitting in his way. He said, “I am guilty. Whatever punishment you deem fit you may give me.”

Rama turned around and asked his Ministers, “What is the punishment you feel must be given to this beggar.” They all thought for some time and replied “all the laws applicable in this State are only for human beings. This is a complicated case, where a human being and a dog  are involved. How can we give any judgement with no law covering this. However, being the King, it is your right to give the judgement.” Rama asked the dog, “Do you have any suggestion? What kind of punishment do you have in mind?” The dog replied, “Yes, I have an appropriate punishment. Make him the chief monk of Kalinga monastery.” King Rama said, “so be it.” The beggar was immediately appointed as the chief of the monastery, a celebrated post  of the State. Sri Rama gave an elephant. The beggar sat on the elephant and went to the monastery very happy. The court was astonished and the Minister asked Rama, “What kind of justice is this ? A man accused of violence has been appointed a chief of a monastery and he has gone to his post in such a joy.”

Sri Rama  quietly asked the dog to  explain. The dog explained, “In my previous birth, I was the  chief monk of the same monastery. I was appointed there since I was truly dedicated to spiritual well-being and wanted to impart my knowledge to all who came to the monastery. I did my best. But as days passed by,  other impressions in my mind overtook me, the name and fame which came along with the post overwhelmed me and I became egoistic and arrogant. I started enjoying the perks which came along the post of the chief. People would treat me like a holy man and I started to think that I am  a God within myself. I knew I was not one but started to demand luxuries befitting a God. Slowly my spiritual commitment receded, I tried several times to fix the problem but could not. I lost myself and that is the reason I am now reborn as a dog. This Sidda, who has now become the head of the monastery, has terrible anger so I know he will punish himself as I did  in my last janma and will be reborn as a dog. This is the best punishment for him. Let him be the chief monk of that monastery and enjoy the luxuries for some time.”

When I heard the story for the first time I had several questions: Why did Rama ask the dog to give justice? Did he know all along that he was  the chief monk of Kalinga in the previous janma, who could give a proper verdict ? Was it proper to send an illiterate beggar for such a high post, which required spiritual bent of mind? Did he know in advance that the dog would give that judgement? So many questions, for which there are no answers.

READ ALSO  Is technology everything in life?

However, the moral of the story is: When one is given a high post, do not misuse the post. You may be in that post because of your religion, education, hard work etc., but to think that you are permanent is a futile exercise. Our country is full of hundreds of fake Swamis who profess themselves to be Gods themselves, live luxurious lives, drive around in luxury cars too. But ultimately die a normal death like any other human beings.

Peter’s principle, every man or woman reaches his or her level of incompetence, at some levels in his life. So sometimes a promotion is also a punishment. I have seen excellent departmental heads fail as ceos. They are so much used to taking decisions based on instructions they receive,  they just do not know how to give instructions ! [I guess Sachin Tendulkar failed as a Captain for the same reason! —Editor]

Many a companies and parties  do this, Justice Rama-style. It is calling kicking upstairs. They give them grand titles. Call them as Chairmen-Emeritus, Mentors  etc., give them all perks, salaries with no power !

Do you agree with Sri Rama’s Justice ?