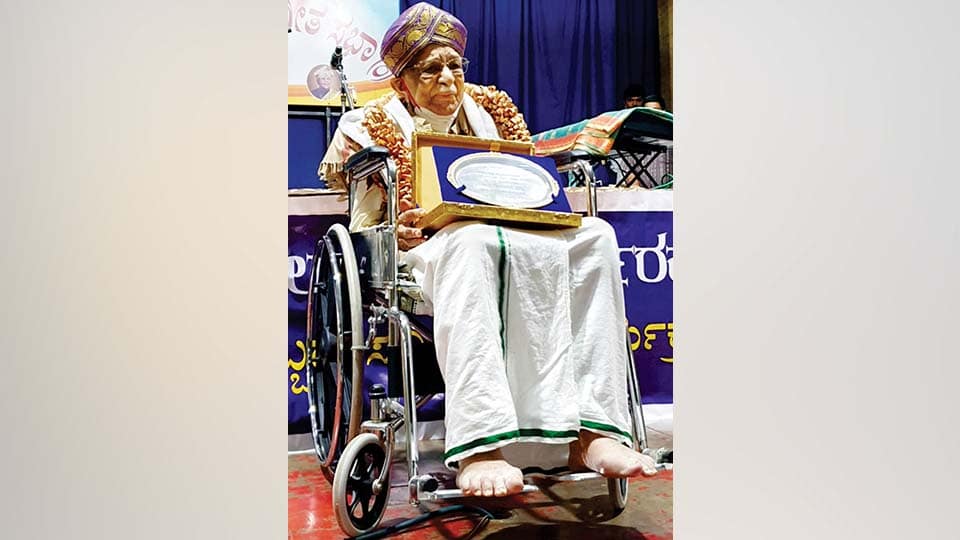 On 12th December, 2020 Sri Nadabrahma Sangeetha Sabha had organised Shree Harsha’s devotional music programme in memory of late Lalitha Murthy, wife of senior art patron K.V. Murthy on her birth anniversary. Prior to the concert, senior art patron K.V. Murthy, who is also the President of the Sabha, was conferred the title ‘Kainkarya Brahma’ for his yeoman service to the Sabha.

K.V. Murthy: Industrialist and munificent donor K.V. Murthy, B.Sc, BE, MIE, MIGS, is an art enthusiast and supporter of art. He believes that art makes our lives meaningful. By sheer dint of diligence and hard work, Murthy rose to dizzy heights in his career as a civil engineer. Specialised in multifarious civil engineering constructions, he has associated with the construction work of airports, dams, bridges and specially  marine structures like docks, wharfs, jettys, beacons and shell roof for testing labs while constructing the Indian Institute of Technology, Powai. Being an engineer and top executive of India’s one of the renowned firms, he had a very lucrative career leading a comfortable life, but is still interested in serving the society. Recognising his contribution to the prestigious works executed by him, Builders Association of India (BAI), Mysuru, has honoured him with the ‘Engineer Par Excellence’ Award.

As a committed Rotarian, he has diverted his attention towards service to society, one of the landmarks of which is creation of facilities for the mother and deaf child by mobilising funds of more than Rs. 30 lakh. He has been awarded ‘Four Avenues of Service’ and ‘Best Credibility President’ by The Rotary. Murthy is associated with almost all the cultural organisations in Mysuru. All musicians and artistes from Karnataka and Chennai have a great regard for him. JSS Sangeetha Sabha, Mysuru, has honoured him with the title ‘Sangeetha Seva Nidhi.’ Under his presidentship, Nadabrahma Sangeetha Sabha built its own auditorium with all facilities with 620 seats and celebrated its Golden and Diamond Jubilee celebrations. A total of 22 Sabhas of Mysuru have felicitated him with ‘Kala Seva Ratna’ title. Murthy has also established ‘Raaga Vaibhava,’ which brings music concerts from popular and well-known artistes.

The concert: Basically from Mysuru, Shree Harsha has gained popularity in the Kannada film industry. His concert on the evening attracted a good number of audience in spite of the pandemic fear. Harsha proved his tremendous experience in the concert. He began the evening with an obeisance to Lord Ganesha with ‘Bhajare Re Bhaja Manasa Siddhi Vinayakam’, a rare composition of Sri Jayachamaraja Wadiyar in Hindola. ‘Belagina Javadi ninna charanava toledu’ by Vijayadasaru proved his voice range. Shishunala Sharif’s not-very-popular ‘Marule maretirabeda Guruvina mado Sri Shivabhajana’ in a folk tune was received well.

Bhadrachala Ramadasaru’s ‘O Rama ninnamam emi ruchira’ of Madhurai Somu’s fame was sung in a different tune and the singer appealed to the audience to join him. The audience did and were in tune with the singer. Prasanna Venkata Dasaru’s ‘Danava kadaliya kanana muriyuta ane bantane ammamma’ was tuned well and had a mesmerising effect.

While singing ‘Enandalayya Seethe’ by Purandara Dasaru, he explained the situation of the song. Rama asks Hanumanta about Seeta’s welfare and Hanuman explains all that Seeta had related to him.The song is set to tune by Mysore Anantaswamy. Would he have been inspired by the film song ‘Vaidehi Enadalo’ from the Kannada movie ‘Dashavatara’ while composing this?

Harsha knows the pulse of the audience. He knows how to impress the listeners. He can sing any song with ease and he knows perfectly well how to weave magic with melody. His instinct to impress carries him away sometimes and he loses concentration on shruti often, which can be easily corrected.

‘Mankutimmana Kagga’ by DVG reminded one very much of Mysore Anantaswamy in the singing and the very popular song on Hanuman ‘Pavamana Pavamana Jagada Prana’ (Vijayadasaru) was sung towards the end of the concert. Harsha closed the concert with the well-known ‘Harivaratmajam’ on Ayyappa of Jesudas fame. Harsha was aptly supported by Shanmuga Sajja on keyboard, Atmaram Nayak on tabla and Vinay Rangadhol on rhythm pad, without whom the concert would have been insipid.