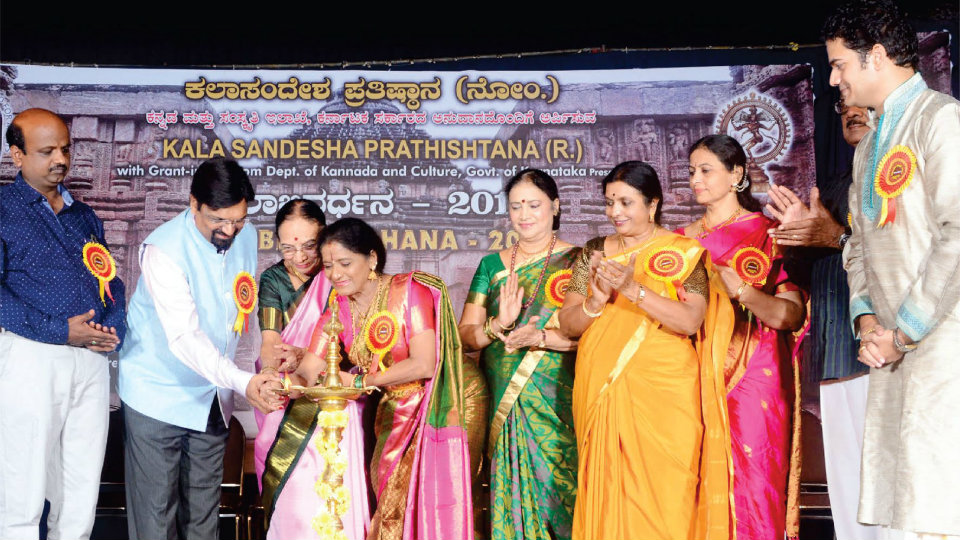 Kala Sandesha Prathishtana held its third annual ‘Kalabhivardhana-2017,’ aimed at honouring those artistes who have rendered yeoman service in the art field. The grand three-day festival was held at Jaganmohan Palace auditorium on the 13th, 14th and 15th of   October 2017.

This Prathishtana is the brain child of Vid. Sandesh Bhargava, an ardent disciple of Natya Guru Dr. Vasundhara Doraswamy. His mission is to take dance to the rural children in which, he has already come a long way. Many children in and around Thirumakoodlu Narasipura have passed the Dance Examinations conducted by the Karnataka State Board with flying colours.

Vidu. Aishwarya Nithyananda and Vidu. Bianca Radhakrishna, disciples of Vidu. Radha Sridhar, performed on the 13th, after the award ceremony.

On the 14th, Dr. L. Subramaniam, accompanied by Ramanamurthy (mridanga) and Satyasai (morching), gave a short concert after receiving the award. Despite his ill-health, Dr. Subramaniam enthralled his fans with a special panchanade Varna in five speeds! A short but a different approach to Hamsadhwani raga lead to the popular ‘Vatapi Ganapatim’ displaying his amazing mastery on the instrument.Muthuswamy Dixitar’s ‘Akhilandeshwari’ (dwijavanthi) brought the curtains down for the day.

The final day had a special solo dance drama ‘Maulya Nidhi Bheema Sena’ by Vid. Sandesh Bhargava. Written by Dr. Jyothi Shankar, the theme of this play, as the title itself suggests was Bheema, the most muscular brother of Dharmaraja. Many facets of this true hero, apart from his valor and anger, has not come to light. A true patriot, his love for peace, a heart that throbs for his countrymen, virtuous conduct and pious deed deserve a mention. Dr. Jyothi succeeded in bringing out these good qualities of Bheema in both her narration and songs.

Dr. Vasundhara’s brilliant choreography was brought alive by Sandesh, who breathed life in to the character of Bheema. His physique added to it.

The story started with Kunthi, hinting to her sons about the possibility of shifting to another Palace (that was constructed with the sole aim of destructing the Pandavas). On entering the Palace, Bheema smells something foul. He is alerted by the odour of jiggery, wax and lac. Anticipating the danger, he springs into action and starts digging a tunnel and escapes the fire tragedy. He is all caring towards the rest of the Pandavas and is not distracted by Hidimbi’s luring. Krishna, the saviour of Pandavas is so confident of Bheema’s capacity that he  prepares him to kill Jarasandha prior to Rajasooyayajna. During the deceit gambling, it was only Bheema who raises his voice against the insult and injustice done to Draupadi and questions Dharmaraya. This situation paves way to the famous ‘Bheema Pratijne’ (his vow to destroy the Kauravas).

His tender feeling was captured appropriately in the ‘Sougandhikaprakarana.’ His respect for elders when he meets Hanuman and his love for Draupadi came alive in this sequence. Keechaka’s episode while Pandavas were in exile and in disguise, reveals his  caring nature.

Here, well-tuned Kumaravyasa’s poems were used to make an impact. It was very meaningful to say that Krishna did not find the need to choose Bheema for Geethopadesha as he was already a ‘Sthithaprajna.’ This is proved in Bheema’s reaction during his beloved son Ghatotkacha’s demise in the battle. Sandesh handled this in a very subtle way.

When Krishna gets ready for a treaty, Bheema, keeping aside his fury, his vow and ego, opts for peace, only to save the innocent people of Bharathavarsha. ‘He is the saviour of Pandavas — the dignified, virtuous and truthful’ says Sri Krishna. The show kept the audience glued to their seats with the involved performance of Sandesh, brilliant choreography, good music and script. On the whole, Sandesh succeeded in highlighting the many faces of Bheemasena and capturing the audience.

Kalabhivardhana-2017
Why I resigned as President of MUTA: A clarification
Motherland’s million minorities