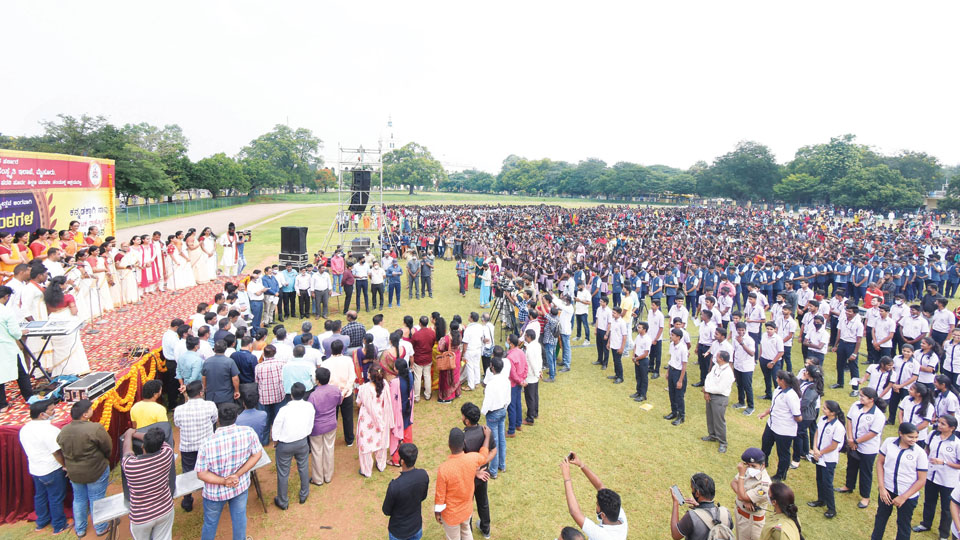 The venue was one among many places including MCC Office on Sayyaji Rao Road, Commercial Tax Office and various Educational Institutions where people came together for the State Government’s call to celebrate Kannada Rajyotsava in a grand manner by organising various cultural events including ‘Kannada Geeta Gayana.’

As part of ‘Kannadakkagi Naavu’ campaign launched by the State Government on Oct. 24 in the run-up to Kannada Rajyotsava, three popular Kannada songs were chosen to be rendered simultaneously in front of iconic buildings/ venues across the State today.

Gearing up for the unique feat, the Kannada and Culture Department had co-ordinated with all the 31 District Administrations and private organisations, associations and overseas Kannada organisations to take part in the event which got good response.

In front of MCC Office, Mayor Sunanda Palanetra administered the oath and sang the songs along with Council Secretary Rangaswamy, Assistant Commissioner (Admin) M.K. Savitha. The event was attended by around 300 people including students and staff of nearby educational institutions.