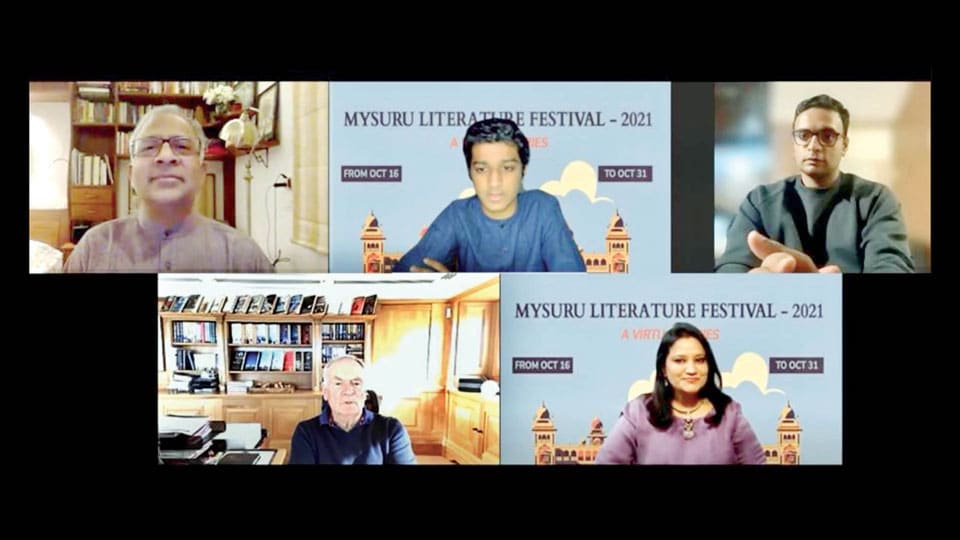 Mysore/Mysuru: Long-time best-selling author, master story-teller and former politician Jeffrey Howard Archer has said that these days not many good people are entering politics and politics is reduced to criticising each other without any good work being done. “While the world needs better leaders, nations like India need a leader of the calibre of late Prime Minister Indira Gandhi,” he said.

Jeffrey Archer was interacting with entrepreneur and author Aroon Raman virtually from London in the session ‘Not a Page More, Not a Page Less’, as part of the Fifth Edition of the Mysuru Literature Festival last evening.

“I was fortunate to have worked with the likes of The Queen and the late British PM Margaret Thatcher. But now the finest people of both our countries are not going into politics but are choosing other professions like business, law, medicine and almost anything except politics. Even in the US politicians act like thugs. I really miss great human leaders like Thomas Jefferson, Franklin Roosevelt and Abraham Lincoln. Where is even one single woman like Indira Gandhi,” he asked.

“I hate, loathe, detest people who come in only to criticise but actually do not give any service themselves. There is a lot of unpleasant stuff on social media. It is awful. I want them to say what they will do for the people and society,” he said.

“Young people whom I talk to about joining politics say, ‘No thanks!’ I don’t want to be shouted at and called an idiot every day of my life. I’ll have a good life and work hard. We are losing outstanding people in your country and in mine. At the moment it’s getting worse. We have to drag it back and I do not know the answer to how you do it. But I do feel we need the very best people of both our nations to be in public service,” he opined.

Churning out stories under stress

When asked about how he coped with the stress of writing, Jeffry Archer denied that writing caused him any stress at all. In fact he insisted that if ever he had to churn out stories under stress, he would totally stop writing. Explaining the actual process of writing, he awed the listeners. He said that he woke up at 5 am, started writing at a stretch of 2 hours with one hour break — from 6 am to 8 am being his first stretch, till his last writing stretch being between 6 pm and 8 pm. He said that after 300 hours and about 35 days, his first draft would be ready. His 5th draft would be only seen by his two senior research assistants and his 14th draft will be sent to the publishers and only his 16th draft gets printed.

“Writing is a job that requires a person to give his 100 percent effort. If you cannot give your hundred percent of concentration, just do not bother to be an author. It is like ballet or painting. Like cricket, thousands want to play for the Indian team but there are only 11 places. Similarly, there are only about 11 best-selling authors at a time. If you want to take me on, if you want to give competition to the best writers, then you need to give your best. If not, do not bother at all. Keep writing and one of you will get the magic and the world waits for you,” he added.

About the authors who have inspired him, he highly praised the Austrian author of the book “Beware of Pity” Stefan Zweig. He also mentioned Mysuru’s own R.K. Narayan. Others who inspired him are O. Henry, Somerset Maugham and Henri René Albert Guy de Maupassant. “More than the plot, the characters motivate me and form the plot. I am a keen observer and have met many interesting people with interesting stories,” he noted. “I am a storyteller, who has grown into a better craftsman over the years. But R.K. Narayan was both a storyteller and a writer. Narayan’s book Malgudi Days is one of the best books of all time. He should have got the Nobel Prize,” he opined. Titular head of erstwhile Mysore royal family Yaduveer Krishnadatta Chamaraja Wadiyar, Chairperson of Mysuru Literary Forum and Charitable Trust Shubha Sanjay Urs and Aryaman M. Urs of technical team were present during the session along with a large number of audience.