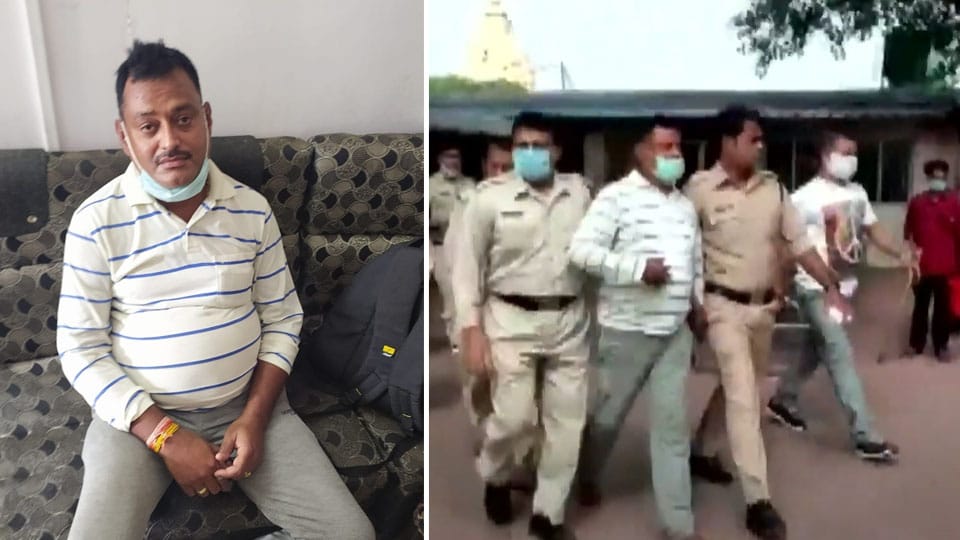 New Delhi: Uttar Pradesh gangster Vikas Dubey, accused of killing eight Policemen last week in Kanpur, was arrested this morning from a temple in Madhya Pradesh after a five-day chase across four States. He was caught just as he emerged after praying at the Mahakal temple in Ujjain, where he had arrived after a 700-km road journey.

CCTV footage showed Vikas Dubey, in a mask, being taken away by half a dozen cops. “Main Vikas Dubey hoon, Kanpur wala (I am Vikas Dubey from Kanpur),” he shouted out while being taken to the Police van.

He first produced a fake ID card of a much younger man with the last name “Paul”. When prodded, he hit out at the guards, who dragged him to the Police. It is not clear how Dubey, last spotted at a hotel in Faridabad, Haryana, on Wednesday, landed up in Ujjain with the Police on his trail.

According to the Police, Dubey drove to Ujjain from Kota in Rajasthan after he was spotted in Faridabad, Haryana. He was in his own car with two associates and could pass off as an ordinary visitor in a white t-shirt and mask.

Madhya Pradesh Chief Minister Shivraj Singh Chouhan said he was in touch with his UP counterpart Yogi Adityanath on the arrest and the criminal would be handed over to the UP Police.