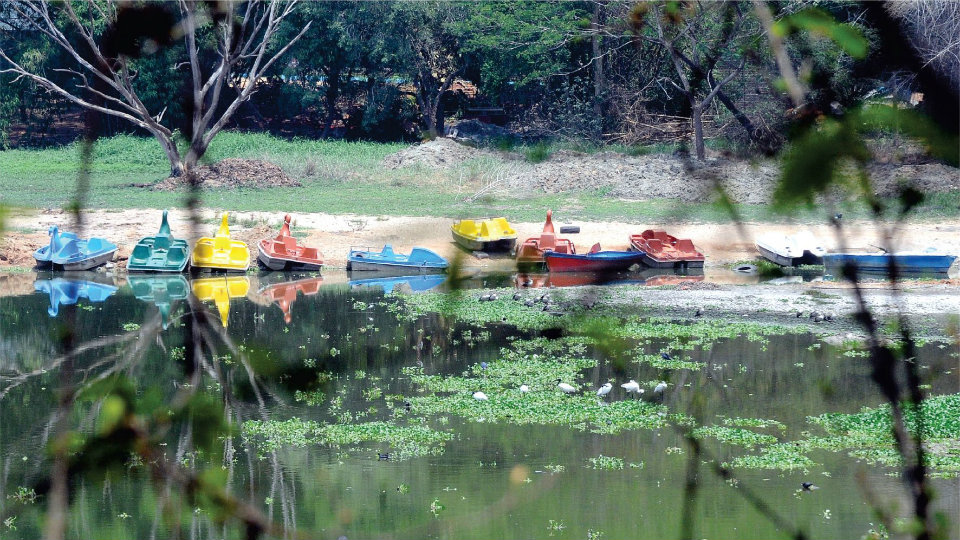 Mysuru – Scorching heat coupled with severe water shortage has hit the picturesque Karanji Lake, one of the main tourist attractions in the city, especially boating activity. A couple of boats have been grounded at the lake for want of water and tourists are being told that boating would resume only after rainwater fills the lake, post June.

It may be recalled here that the Karanji Lake Nature Park (KLNP) had so much of water that it hosted a boating festival as part of ‘December to Remember’, a special tourist festival to attract visitors during the Christmas season. The Zoo Authority of Karnataka (ZAK), which manages the Mysuru Zoo, is the caretaker of the Lake which has many attractions for visitors, including a walk through aviary.

There are about six boats where 30 people could enjoy the boat ride in one session. All the six boats have been grounded since over a week and probably this is the first summer in the recent past that boating activity has been suspended due to lack of water. To make boating a prime attraction, the Zoo authorities had purchased a couple of boats including motorised ones, pedal boats and rowing boats.

According to environmental groups, increased urbanisation has taken a toll on lakes including Karanji and Kukkarahalli where water levels have drastically dropped. While there is still some water at the Kukkarahalli Lake, Karanji Lake resembles a small pond with small patches of water at a couple of places. The lack of water is now threatening the bird and fish population in the lake. 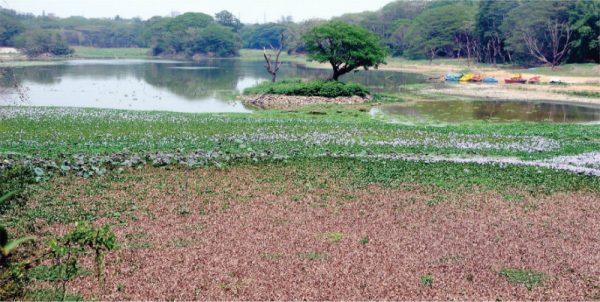 Located behind the Zoo, Karanji Lake is a good example of wetland ecosystem and is a home to many local and migratory birds.  Boating in Karanji Lake is the best way to get a close look at the birds and a wide variety of birds can be spotted. A Butterfly Park near the boating area is an added attraction.

The gently swaying boat, the still waters, the pleasant weather, and the green lake shore make boating a memorable experience and birds including darters, ducklings, pelicans, spoonbills and painted storks can be spotted and according to tourists, the calm and serene lake makes one feel close to nature.

According to Zoo Executive Director K. Kamala Karikalan, boating will resume only when the lake fills up. “We have suspended boating activities since the past 10 days and we are hoping that the lake will fill when it rains,” she said. The Zoo’s move to close the boating activity has been welcomed by Green groups who said that the existing water must be left undisturbed for the birds and aquatic species.

Environmentalists said that as the Karanji Lake is dry, now is the best time to de-silt it. Also, the lake can be cleansed of effluents and sewage that flow into the water body from neighbouring localities. They said that the absence of Rajakaluves (natural underground water drains) in the Karanji Lake premises has caused the lake to be more polluted. If silt is removed now and the lake is cleaned, enough water can be stored in monsoon, they felt.